Life at the top of the mountain has been good to Justin Smooth. And, he plans to stay there.

The Ohio Valley Wrestling Heavyweight Champion has reigned over the division for the past five months, and says that he will eventually go down as the greatest titleholder in the promotion’s long, storied history.

The list of men who have held the belt includes names like John Cena, CM Punk, and Dave Batista. And while he may appreciate the comparisons, the Trinidad Titan insists that he can be better than them all.

“It’s good to know that I can be mentioned in the same breath as those other, past champions,” Smooth said in a recent interview with TheGorillaPosition. “They’re all legends. But some of those guys were from what? 15-20 years ago? That’s a long time, in terms of pro wrestling.”

“That’s why I’m now the measuring stick. I’m what’s leading present-day OVW to get back on the map. For all those fans, those independent fans out there from all over, when they turn on OVW… There’s Smooth. So, moving forward, people will have to measure up to me.”

Since re- capturing the company’s top prize on the June 1st Saturday Night Special, Smooth has had a run of successful title defenses against contenders like Dustin Jackson, Corey Storm, and former ECW, WWE, and Impact superstar Rhyno.

However, his current reign hasn’t always been as ‘Smooth’ as his last name: He’s had to deal with roadblocks and random challenges, as well as his rocky relationship with commissioner Dean Hill. At his worst, the Trinidad Titan has been known to infuriate Ohio Valley Wrestling management with his brash and nefarious tactics.

But, there’s more to Smooth than just his swagger…

The man behind this bravado is actually a lifelong fan of the sport, who began his career by training with the Wild Samoans in Pennsylvania. An explosive athlete, the 6’2″, 230-pounder would eventually make the trek to OVW in 2016, where he has developed in to one of wrestling’s hottest prospects.

“I grew up as a fan back in the late 90’s and early 2000’s era,” Smooth recalled. “I watched the Monday Night Wars, and was a fan of all the guys who came from that time. From that point on, I just grew to realize that I wanted to take my shot at being in professional wrestling.” 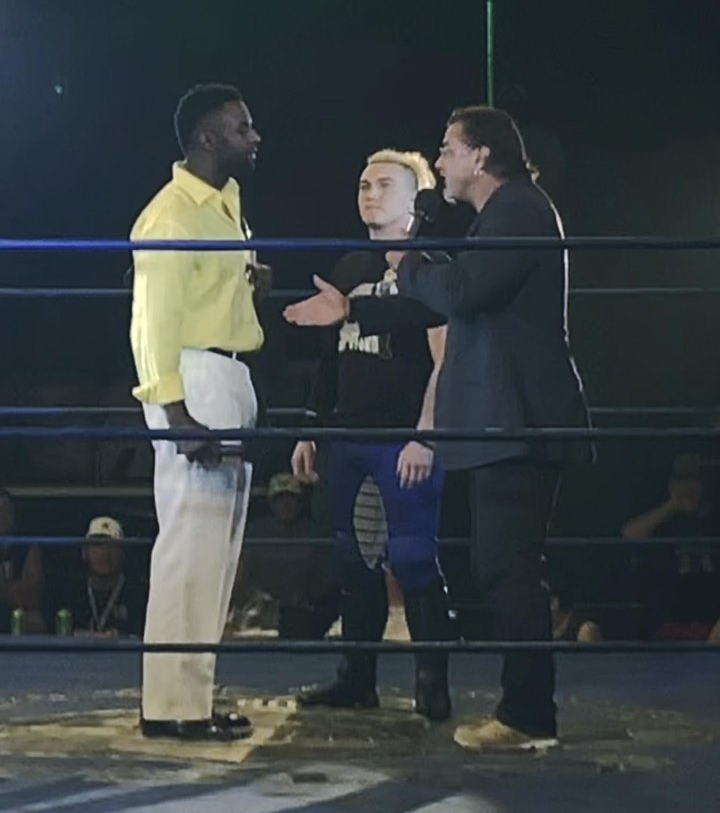 “So, as soon as I got older, I went to train with the Samoans, and I did that for about a year. But during that time, I knew OVW could probably offer me a little bit more, in terms of starting out in this sport and this business. So, I saved up some money, and eventually moved to Louisville, because this is where I wanted to be.”

Smooth says that it was a longtime goal to make it to the legendary, Louisville franchise.

“I always knew about OVW. And as I was getting older, I knew about the guys who came from here, like Cena and Orton. I knew I wanted to try my hand at it, and I was able to make that a possibility.”

In the three years since, he’s not only honed his skills in the ring, he’s discovered a newfound confidence on the mic – crafting his ‘Hollywood Smooth’ persona in to the territory’s hottest heel.  It’s drawn him the attention of several, larger promotions.

“Right now, I feel like I’m exceeding expectations,” he said. “I’m growing with OVW, and the opportunity that they’ve given me has been amazing. They gave me the chance, and I feel like I’ve ran with it.”

Part of that growth has been the company’s recent move to live, weekly television. Smooth says that he feels naturally comfortable in this new environment.

“Every time I would go out and compete or perform, I would carry myself in my segments as if I were live on TV, anyway. So, I had that mindset a long time ago – that there’s no room for editing or for correcting mistakes. Now that we switched over live a few weeks ago, it was almost second nature to me at that point.”

“So, when we did our first live show… I felt as comfortable as ever. I had no jitters, I knew what I had to do, and I felt comfortable in my own skin. And, I think, as soon as you’re comfortable in your own skin, everything else will flow the way it should be.” 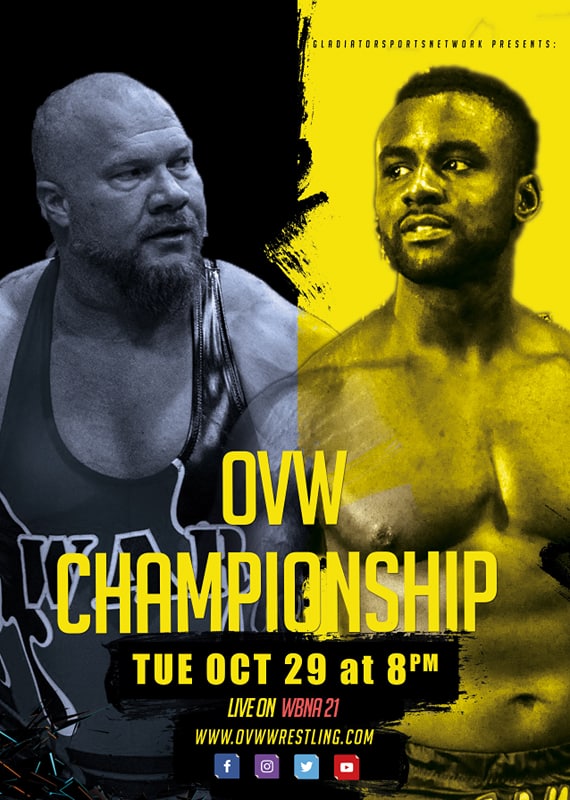 Up next on Smooth’s OVW schedule will be a defense on October 29th, against former NWA World Champion Jax Dane, who recently won a 15-man rumble to earn the right for a title shot.

In addition, Smooth will also take part in All Glory on October 19th in Merrionette Park, Illinois, where he will battle fellow OVW competitor Corey Storm. The event will take place as part of Impact Wrestling’s Bound for Glory weekend in the greater Chicagoland area, and will feature performers from multiple promotions.

Smooth says he’s looking forward to showcasing his talent on a major stage, and hopes it’s yet another step forward in his budding career.

“I have aspirations to eventually go to wherever offers me an opportunity to grow,” he said. “That’s the main thing. Whether it would be with somewhere like Impact or another place, as long as it offers me the chance to grow in some type of way. Whether it’s financially, personally, or professionally… I would be open-minded to working with them, if I feel like it’s the right opportunity for me.”

As for the immediate future? Justin sees nothing but ‘Smooth’ sailing ahead.

“I believe that, very soon, I’ll be displaying my talents on a national level… and on a regular basis,” he said. “I don’t know where it will be yet, but I will DEFINITELY be at that level. I’m ready to show the world what I can do.”

And in the meantime, he’s keeping a firm grip on the OVW gold, and wants to be known as the standard bearer of the promotion’s new era.

“I plan on being the champion here for a long time. I’m ready to put this company on my back if I have to.”

“We’re live every week now, and I feel like the best is still yet to come – for myself and OVW. I’m ready to do what I’ve got to do… to put some more eyes on me, and put more eyes on us.” 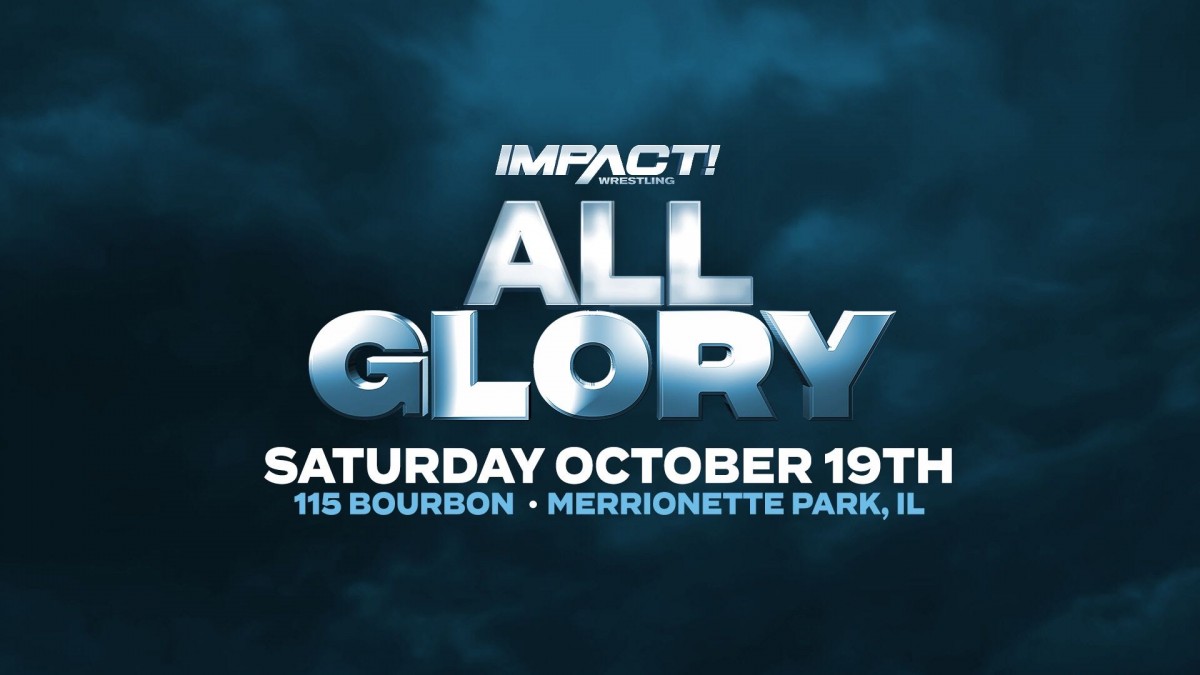