AJ Styles used to reach out to Air Paris for a tag… On Sunday night in Chattanooga, he reached out to his former partner’s daughter for an in-ring celebration 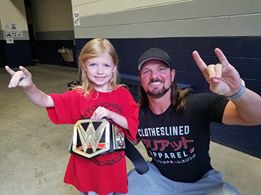 Some friendships bridge a generation… and some reunions are Phenomenal.

On Sunday, as WWE Champion AJ Styles had wrapped up his match at the company’s house show in Chattanooga, TN, he was joined in-ring by a very, special visitor.

The daughter of Styles’ former tag team partner, Air Paris, made her way to the ring to hold aloft the WWE Championship belt.

Styles and Paris formed ‘Air Raid’ in early 2001, as part of the cruiserweight tag division in the waning days of WCW. The attention that the duo achieved there allowed Styles to springboard to TNA and beyond. Paris, now retired from in-ring competition, has stayed in touch with Styles over the years. He, along with his wife and daughter, made the trip from Georgia to pay a visit his Phenomenal friend.

Post-match, Styles reached out for young Perri, paying respect to his former partner, his family, and even his own past.

It was quite a night for the kindergartner, who has aptly earned the nickname, Heir Paris.

“Well, she said was going to hold the WWE title some day,” Paris joked. “Turns out, it just happened to be today!” 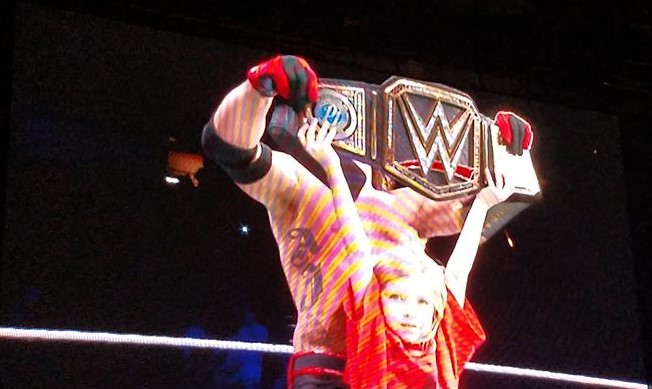 Paris says that Styles always stays true to his roots, going back to their days with Bill Behrens’ NWA Wildside promotion in the late 90’s. The duo had a classic series of matches, in a rivalry that eventually led to their pairing in WCW.

Paris says that Styles always goes out of his way to make his family feel special.

“That’s just the type of person he is,” he said. “When you see him, he never forgets where he started. As good of a wrestler as he is, he’s just as good of a person. That’s just how he’s always been.”

Now, both father and daughter have appeared in the ring with The Phenomenal One – 17 years apart. Coming off her successful performance, Perri reportedly told her Mom: “You’re the last person in the family who isn’t famous now.”