I admit it… I’m a podcast junkie.

In recent years, one of the biggest changes in professional wrestling coverage has been the influx of internet voices. Once somewhat of a cottage industry, wrestling podcasts have exploded in popularity and gained a huge following among the fan base. Over the past 20 years, these internet talk shows have morphed from being simply entertaining to now incredibly informative and influential.

And all that talk isn’t just hot air. Several of these programs are also posting some of the biggest listening numbers world-wide, regardless of genre.  Leading the way is ‘The Podfather’ himself, Conrad Thompson, whose shows with Bruce Prichard, Eric Bischoff, Tony Schiavone, and Jim Ross have raised the bar, in terms of not only listens and likes, but revenue and reward.

But the jovial mortgage man and Flair-in-Law is not alone in his ability to draw a listening audience. Far from it. It seems like right now, there might be about 73 million wrestling podcasts on this planet, with more popping up on a weekly basis.

And, from the top to the very bottom, each show brings something different to the table. It may make you laugh or make you angry. You might think the opinions are shrewd and intelligent, or you might think the broadcaster is an idiot. But, as someone who has seemingly heard them all, I can attest… there’s a flavor for everyone.

That’s really the beauty of the podcasting community: Whether it be longtime observers or amateur analysts, anyone with an opinion and an online connection can give you their 1-2-3 Cents on what’s happening in the ring.  Because of that, this plethora of programming can run the gamut of entertainment. From reticent reporters to screeching shock jocks, each show takes on the personality of its hosts – for better, or for worse.

Is it journalism? Or, is it purely entertainment?

Wrestling podcasting is neither fish nor fowl, because there has never been a real ‘parameter’ or boundaries set for it. Left to their own devices, the broadcasters have the individual freedom to shape their shows in whatever way they want to. Whether you love a particular program or hate it, the ‘podcast movement’ – in general – has been a success.

And overall, that’s been a good thing for the wrestling industry. When we think that an episode of RAW or a New Japan pay-per-view is good, we tune in to see if our favorite podcasters agree with our assessment. On the flip side, if something sucks… we are eager to hear those same personalities rip the hell out of it.

So… It’s sort of like a fucked-up version of the Circle of Life.

Still, that action/reaction keeps fans interested, even on days when there are no major events happening. In other words, it keeps the people talking. And, that constant conversation and swirling cynicism, in turn, keeps them interested… even when the in-ring product doesn’t.

I find myself listening to guys like The Solomonster or Chris Toplack for concise analysis and reflection. If I want a little edgier commentary, I tune in to The Don Tony & Kevin Castle Show, Wrestling Soup ,or The Hitting the Marks Podcast. 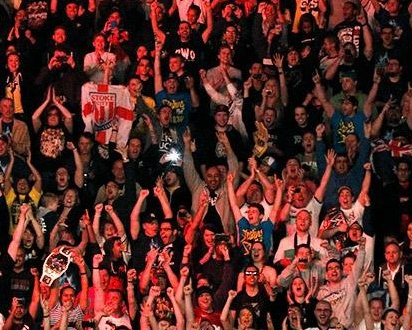 I may even head up north of the border for The Signature Spot or some Turnbuckle Talk. And, depending on what day of the week it is, I might go for some deep-fried, southern ‘rasslin’ discussion with The Average Marks, or the Tapped Out guys.

And thanks to the wonders of technology, you can take these wrestling ramblings anywhere you go. There’s nothing like a string of podcasts to pass the time on a long road trip, or while waiting in a line of bumper-to-bumper, rush hour traffic.

But, these shows aren’t just for the car. No, no… You can listen while showering or shopping, running or relaxing. Hell, I even listen to them while I’m sitting on the toilet. (Please, don’t judge me.)

In all seriousness, wrestling podcasts have become a legitimate part of the fan experience for hardcore followers like me. They have become prominent and profitable, and despite some of their occasional negatives, I think that overall, they add way more to the industry than they subtract.

And I know many other fans who feel the same way. It’s almost hard to fathom what it would be like if we couldn’t dial up this new school version of wrestling radio, and hear all our favorite personalities ‘play the hits’.

So, this is a sincere salute to all the pro wrestling podcasters who help myself and many other fans pass the time: Thanks for all you do, and Rock On… You keep crankin’ ’em out, and we’ll keep crankin’ it up.

The Hitting the Marks Podcast | Turnbuckle Talk | The Signature Spot with Chris Toplack | The Tapped Out Pro Wrestling Podcast | My 1-2-3 Cents | The Average Marks | The Solomonster Sounds Off  | The Don Tony & Kevin Castle Show | Wrestling Soup | The IMPACT Lounge | TalkaMania | The Pro Wrasslin’ Reflection Podcast | Grilling JR | What Happened When | Something to Wrestle | 83 Weeks | Keepin it 100 | Talk is Jericho | Killing the Town | The Jim Cornette Experience | The 6:05 Super Podcast | The Steve Austin Show | Yep! I Like Wrestling | X-Pac 12360 | Wrestling Observer Radio | The Wrestling Perspective Podcast