It looks like Matt Riddle has made the jump to… somewhere.

After weeks of negotiating with both WWE and New Japan, perhaps the most accomplished free agent in professional wrestling today is ready to light some new fires at the ‘highest’ level. He’s gone the typical route of cancelling indy dates and saying some goodbyes, so it’s a pretty good indication that he’s officially off the open market.

The smart money says that Riddle has already been bagged up and shipped to the folks at World Wrestling Entertainment, and it’s been rumored that he will be in the crowd at this Saturday’s TakeOver in Brooklyn.

‘The King of Bros’ is certainly a different animal than anything we’ve ever seen before. With his Jungle Book looks, wild hair, and bare feet, he cuts a physical image that’s reminiscent of the Von Erich brothers. At the same time, he possesses the legitimate, combat skills of a modern-day warrior.

When he’s not pounding opponents, he’s smoking pounds of weed. And he isn’t shy about it. It’s part of his lifestyle, his aura, and his presence. It makes up a lot of who Matt Riddle really is – a walking, talking, ass-kicking combination of muscle, mirth, and marijuana. 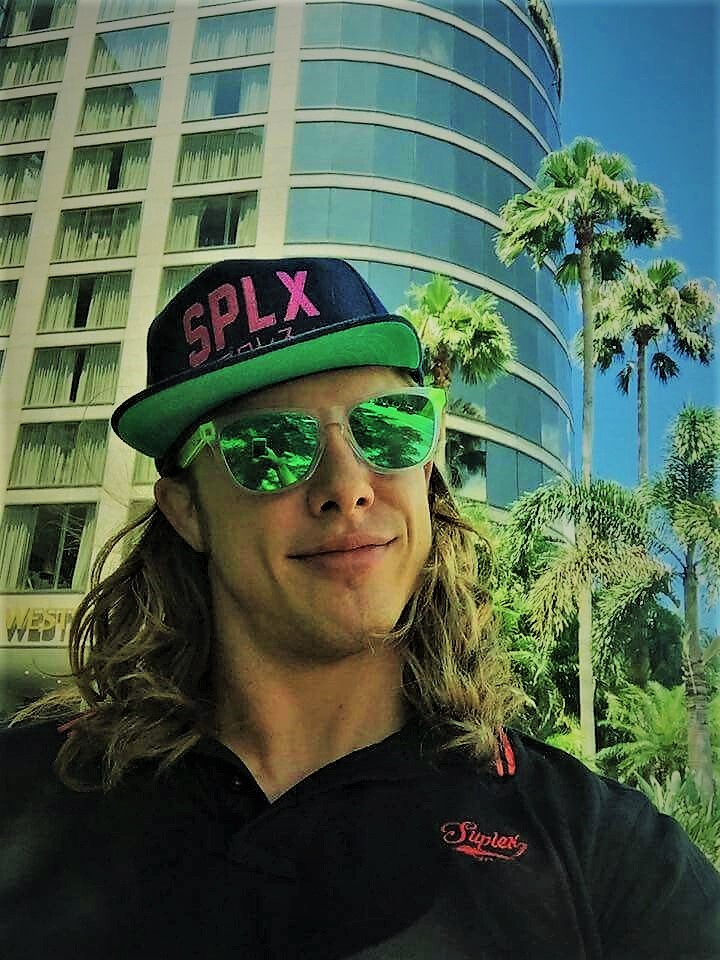 His laid back demeanor and real world rap have endeared him to a new generation of modern fans. The ‘nice-guy-who-can-make-you-tap’ persona is perfect for today’s multi-faceted, internet audience, and his openness on social media has been a hit with the millennial crowd.

Because of that widespread appeal, Riddle is easily one of the most popular stars on the indy circuit today. He’s like an anti-hero of a different sort, and a good deal of his mainstream fame clearly has more to do with hookahs than it does headlocks.

While Riddle is a relatively new name to some fans, the seeds of his pro wrestling career were initially planted in 2014. He made the jump to the squared circle after starting in the octagon, as part of The Ultimate Fighter 7.  Riddle then moved on to a promising, but brief, tenure in UFC and other mixed-martial arts organizations.

Despite going a legitimate 9-3 in the welterweight division, Riddle tested positive for his preferred plant on multiple occasions, and had two of his UFC victories ruled as no-contests. After his departure, he told Sports Illustrated, “I’m the only guy ever fired for marijuana.”

Riddle added to his now four-year wrestling resume during April in New Orleans, when he appeared on several cards as part of the festivities taking place surrounding WrestleMania 34.  In the span of that week, the man known as ‘Deep Waters’ systematically worked against Minoru Suzuki,  Zack Sabre Jr., Deonna Purrazzo, Jimmy Havoc, Daisuke Sekimoto, and Will Ospreay, before capping things off against James Ellsworth.

He also appeared in a one-night tournament, and actually wrestled for three different companies on the same day. Quite a busy schedule.

The talent and drive are glaringly obvious, even in the relative anonymity of the indy circuit. Although Riddle’s stubborn stance on weed has made him taboo for the major companies, he’s become an idol to the die-hard fans. 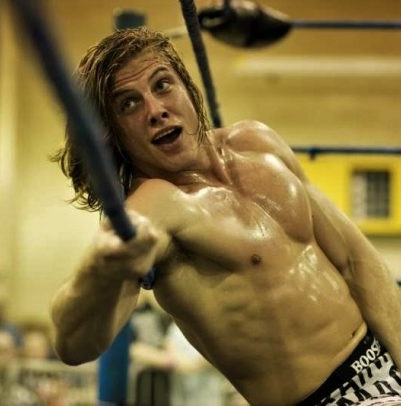 That’s probably because, unlike most of today’s performers, Riddle is truly unique. Here’s a guy who looks the part of a snowboarding slacker, but could turn right around and kick your ass. He’s a virtual anomaly: a demonic destroyer who also happens to enjoy the devil’s lettuce.

In so many ways, Riddle defies all the traditional, stoner stereotypes. He has cultivated a workhorse image, and his motivation as a performer can not be questioned. Because of that, in the last several months, whispers of that elusive contract with WWE have been growing louder and louder.

To his credit, he’s downplayed those rumors, saying at one time that he would be fine staying on the independent level, if his personal needs weren’t going to be satisfied. In this supply-and-demand era of pro wrestling, Riddle has consistently raised his street value by never being too anxious to make a deal.

And as far as his herbal habit is concerned, Riddle legally possesses a medical marijuana card in the State of Nevada, and has stated that cannabis helps him deal with anxiety, as well as the regularly recurring injuries that come with being a professional athlete.

More importantly, Riddle also says that rather than rely on Oxycontin or Vicodin, he goes the all-natural route. Which is actually a pretty common practice among professional athletes — just not one that is normally discussed. With pain management a part of everyday life, weed is considered by many to be much safer than potentially addictive opiods.

Most people with any acclaim simply say that they have ‘experimented with pot’. On the flip side, Riddle isn’t afraid to tell you that he’s a master scientist.

He walked away from mixed-martial arts because he thought it was what was best for him, and because he felt he was already the best performer in the world. His rationale being – If I’m good at what I do, then why should anyone care? 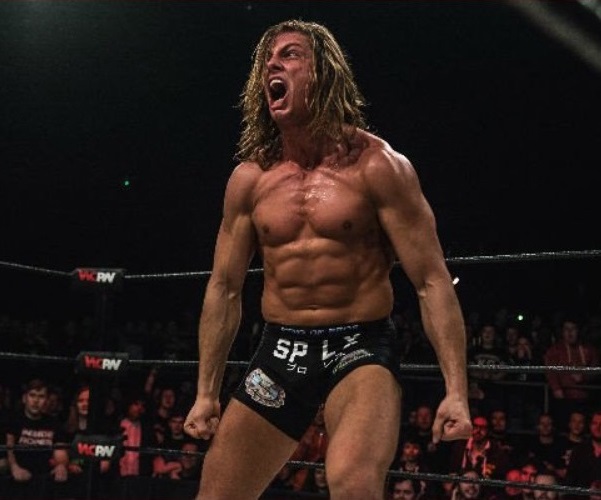 His mission was to prove that his skill and resilience couldn’t be measured on a digital scale, and that his value couldn’t be judged by the contents of a plastic cup. And in the process – if the way he lived didn’t jive with everyone else’s plans — Well then, fuck ’em.

To him, it’s no big deal; He smokes pot. It’s just what he does. And in his opinion, it helps him.

An overwhelming majority of facts and testimonials seem to back Riddle up. Medical marijuana is now legal in 29 states. At the same time, however, an overgrowth of the industry has been slowed by archaic, federal regulations. Those national laws supersede the states, so marijuana companies have had to go so far as to do cash-only bookkeeping, and are restricted in how they distribute the product.

Even still, legal pot sales were a 3.2 billion dollar industry in 2017, and that number will only grow as more minds change and boundaries disappear.

Many wrestling performers – notably Rob Van Dam and Sean Morey – have been serious advocates of cannabis, it’s benefits, and the goal of its ultimate legalization. It’s a very valid argument: We watched a generation of wrestlers drink and pill themselves to death, because they were afraid of silly weed testing. There’s no telling how many of them may have lived if it would have been acceptable for them to merely fire up a joint.

In an era where a large portion of its performers rely on medical or recreational use of cannabis to cope with the grind of their profession, it’s still inexplicably looked down upon by the old guard. The stereotype that marijuana use falls in the realm of slackers and the inattentive. And of course, they might even throw in the usual fare that it’s a dangerous, ‘gateway drug’. 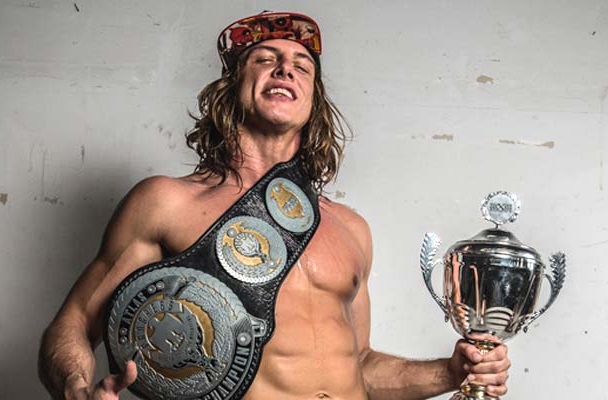 All this hysteria, over a natural product that the vast majority of Americans find at least passable, and likely enjoy themselves. Talk about Reefer Madness.

Now, WWE has a hardcore hippie who they just can’t deny. Marijuana Matt is a one-of-a-kind, maybe even once-in-a-lifetime, athlete, and someone that they might be willing to bend some rules for.

After all, this guy is a high-quality product, and needs to be enjoyed by the masses. But if they can make adjustments now, then why not just go the whole way?

There’s only one solution to this Riddle: It’s time for WWE to officially Go Green. Don’t just loosen the rules when it comes to weed, Legalize it.  Maybe not in the locker room, but at least, in terms of their wrestling contracts. Don’t penalize your stars for using a substance that has far more benefits than it does drawbacks. Particularly when many of them are already using it.

In the end, the wrestlers are going to do what they want to do anyway. So why does WWE continue this silly, ‘catch-me-if-you-can’ process? Much like the federal government, the folks at Titan Tower can’t seem to see the changes that are coming to society. They are firmly rooted, and just don’t notice everything that’s blooming up around them.

World Wrestling Entertainment and every other major promotion needs to do away with their marijuana testing policies altogether, and embrace the fact that it’s a much safer option than the alternatives. It’s time to escape their old world beliefs, and acknowledge that your performers can hit the bong without missing a beat.  Eliminating testing saves the company a little money, and eliminates costly fines and embarrassing situations for its performers. So, it’s time to let it go, and Free the Weed.

It would also be a great step forward for the company in keeping an open mind, and letting the wrestlers just be individuals. You might just be surprised on how well it helps the overall product on screen. You may even discover a few ‘budding’, young stars.

And most of all, it would clear the way, from now on, for guys like Marijuana Matt.

They shouldn’t fine Riddle, hold him back, or discriminate against him, just because he likes to roll up a fatty every now and then. After you clear away all the smoke – He’s legit. He’s popular. And, he’s the type of guy who could light a real fire in the WWE Universe.