WCW presented Starrcade 1997, which featured the long-awaited Hollywood Hogan vs. Sting match for the WCW World Heavyweight title. The main event showdown would be Sting’s first bout in about 15 months. 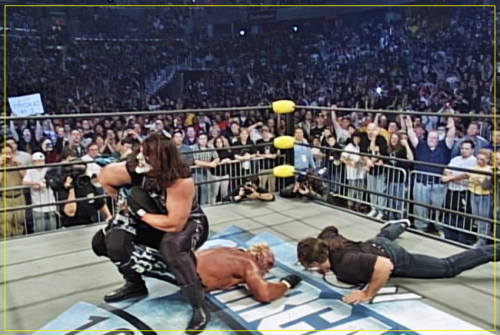 It would also be the biggest event in the company’s history, as fans had watched Sting torment Hogan

for over a year while sporting his new, darker look. In reality, Sting had been recuperating from injuries, and the change in character allowed him to not only take some time off, but adapt his ring style and have a career re-birth.

Sting would defeat Hollywood Hogan by submission to win the WCW World title, but not without controversy. Hogan had originally won the match with an alleged “fast count” by referee Nick Patrick. But Bret Hart, who was making his debut acting as a referee, restarted the match.

Sting would eventually hook on his finisher, the Scorpion Deathlock

, and Hogan submitted. Members of WCW’s locker room then emptied to the ring to celebrate with the newly-crowned champion.