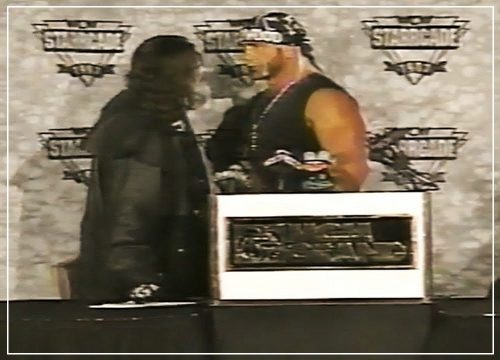 The fallout from Starrcade continues on the debut episode of Thunder, where Sting is stripped of the world title and speaks for the first time in over a year.

JJ Dillon had come out to announce that the WCW World Heavyweight championship had been held up, due to a controversial finish of the long-awaited Hogan-Sting main event at Starrcade 1997. With that, Sting grabbed the microphone and for the first time in months, actually spoke.

“You got no guts,” The Stinger told Dillon, before turning to Hogan. “And you… You’re a dead man.”

The debut episode of Thunder would draw huge ratings, but the series would turn out to be an albatross for WCW in the long run. With the organization rolling, Eric Bischoff was asked by network executives to come up with a second weekly wrestling show. They were hoping to bounce off the success of Nitro on TNT, thus, Thunder was soon slotted into Thursday nights on its sister network, TBS.

Thunder would air on TBS from January 8, 1998 to March 21, 2001. With ratings lagging and costs being cut, it eventually became a taped program, and moved from its Thursday time slot to Wednesday nights.