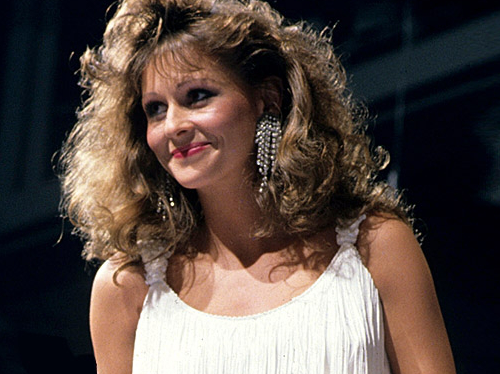 Elizabeth Hulette, best known to wrestling fans as Miss Elizabeth, dies of acute toxicity in Marietta, Georgia. She was 42 years old at the time of her passing.

Hulette, a graduate of the University of Kentucky with a degree in communications, was best remembered as the manager of her real-life husband, “Macho Man” Randy Savage. The two met while working International Championship Wrestling shows. She debuted as the ‘surprise choice’ as his manager in the WWF in the mid-80’s, beginning a legendary odyssey between the two— in both storylines, and their lives. The couple would eventually divorce in 1994.

Hulette, fondly remembered by wrestling fans for her kind demeanor and stylish elegance, moved on to WCW in the 90’s. At the time of her death, she was living with wrestler Lex Luger, who called 911 when he found her unresponsive. Respondents on the scene were unable to revive her. Hulette’s death was ruled to have been an accidental overdose, caused by a mix of alcohol and medication.

A young Elizabeth Hulette hosts this episode of the Poffo promotion, not long before she went on to become ‘The First Lady of Wrestling’