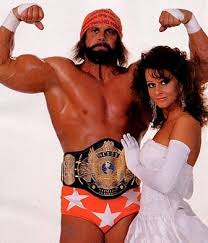 Randy Mario Poffo, known worldwide as ‘Macho Man’ Randy Savage, dies of a heart attack while driving with his wife in Seminole, Florida. He was 58 years old.

Savage was a former WWF and WCW World Champion, and widely considered one of the greatest performer’s in the history of the industry. He gained global fame in the World Wrestling Federation in the mid-80’s, alongside his real-life wife, Miss Elizabeth. Their love story and ‘Beauty and the Beast’ pairing captured the imagination of fans.

With his trademark raspy voice and unpredictable behavior, Savage became a crossover celebrity – making numerous television appearances, portraying the character of ‘Bonesaw McGraw’ in Spiderman opposite Tobey Maguire, and appearing in commercials as the spokesman for Slim Jim.

Upon his death, Savage’s remains were cremated, and his ashes were placed under his favorite tree on his property in Largo, Florida.