In so many ways, Del Wilkes is Americana… personified.

The man who has donned the red,  white & blue in professional wrestling for over 25 years is a symbol of American pride for many fans. For a generation, the image of The Patriot waving Old Glory, is one that universally brings the crowd to their feet and has them chanting, ‘U.S.A.’.

But, as TheGorillaPosition.com learned in a recent interview, the character isn’t just an image; it’s very much a mirror of Wilkes’ real life.

Born and raised in Columbia, South Carolina, Wilkes would go on to play college football in his home state. The 6’2″, 280-pounder was a 1984 Consensus All-American, starring at offensive line for the Gamecocks, before embarking on a career in professional wrestling.

After training in the Mid-Atlantic region, Wilkes ventured north to the American Wrestling Association, where he portrayed The Trooper, a police officer gimmick that wrote his opponents a ticket after defeating them.

“I had trained in my hometown of Columbia, South Carolina. The Fabulous Moolah had a school here.” Wilkes said. “That’s where I got my basic training, and I met Wahoo McDaniel on one of her shows. He had been working up in Minnesota for Verne (Gagne) at the time. So, he called me and asked if I would be interested in going to the AWA.”

“I moved up to Minnesota, and trained with Brad Rheingans. I actually lived with Brad for a while, and that’s initially how I had gotten my start up there.”

As Wilkes developed, he displayed not only immense power, but uncanny balance and footwork for a man his size – honed from his days as an offensive lineman. At a time when the dying company desperately needed stars, his appeal quickly made him a crowd favorite. He and partner, D.J. Peterson, would eventually be the final two men to hold the AWA World tag team championship when the company folded in 1991.

From there, Del Wilkes stepped into a role that was tailor-made for him: The Patriot.

“After I left the AWA, I got a call from Joe Pedicino and Bill Eadie, who were the brains behind the Global Wrestling Federation, and had the idea of putting it together” he recalled. “They had a date for their first set of tapings, and I flew out there to where they were doing the shows, at the (Dallas) Sportatorium.”

“That day, from before we went to The Sportatorium, Joe, Bill and Boni Blackstone – Joe’s wife- were the ones who presented me with the idea for the character. And, that’s where I started doing The Patriot – from there.”

He became one of the major names of the ESPN-televised company, notably feuding with The Dark Patriot (Doug Gilbert). He would also strike gold in the singles division, holding the GWF North American title on two occasions.

He became a major star during his tours of Japan, and later signed with WCW,  capturing the World Tag Team titles with Marcus Bagwell, before moving to the biggest stage of them all.

When he reached the World Wrestling Federation in the summer of 1997, The Patriot jumped into a red, hot feud with Bret Hart that would change his career forever. He would battle not only The Hitman, but an entire nation, as part of a US vs. Canada storyline in the company at the time.

In an odd turn of events, the American wrestlers were cheered as heroes in The States, but hated on WWF shows north of the border. For Wilkes, it was a challenge. He had to work a different style, depending on which country the match was taking place.

“I had never been involved in anything like that since I started doing The Patriot,” he recalled. “Bret and I worked one night in Seattle, Washington, and then crossed over the border for the next night in Canada.”

“I was suddenly the heel. Not because of anything I had done, but because our geographical location had changed. He was just so over in Canada. So, we had to change on the fly, because he was such a hero there, that I was the heel automatically.”

The feud ended almost as quickly as it started, but ‘The North American War’ had made The Patriot a household name, and the image of the golden-eagle mask iconic. Still, it remains an odd chapter in the history of babyfaces vs. heels.

“In one particular city, during the match we had five different occasions where people tried to get in the ring – or did actually get into the ring – to come after me,” Wilkes said. “At that point, Bret and I decided that we should just go ahead and cut the match short.”

“I got back to the locker room, and I had the police escort me from there back to my hotel room. They told me: Stay in the room, order room service, and don’t go anywhere. Just stay in here, where we know you’re safe.“

“So, I had become that big of a heel, just by crossing the border. It was the strangest situation I ever dealt with in wrestling.”

Still, semi-active today and working in sales back in South Carolina, he’s overcome physical ailments and an admitted addiction to painkillers. He’s also made numerous appearances on talk shows, discussing various topics surrounding the industry. Now free of any demons or misgivings, Wilkes has become known for being out front, and forthright.

In other words — any time he’s given a chance to express his opinion, this Patriot isn’t afraid to express his Freedom of Speech. Especially when it comes to talking about the nation he represented in the ring.

“I’m very thankful that I grew up in a home where my Mom and Dad taught me to be thankful for the privilege of the country we live in and were lucky enough to be born in.”

“There’s a deep of love of America that I have, because that’s how I was raised. And, I’ve always shown it. I’ve always worn it on my shoulder, and been very proud of it.”

“I live it each and every day now,” he said. “My son is stationed right now at Ft. Hood. He got to come home for a few days, but then he’s going to be stationed in Iraq for a few months. After that, then he will be off to Syria, and he’ll be gone for a total of nine-and-a-half months.”

“So, I’m very proud of my son, to have chosen to wear that uniform to represent this great nation of ours. Just like I’m thankful for all the great men and women who have chosen to honor this country with their service.”

He says that some of his greatest memories in his career were shaking hands with Armed Services members while on tour. 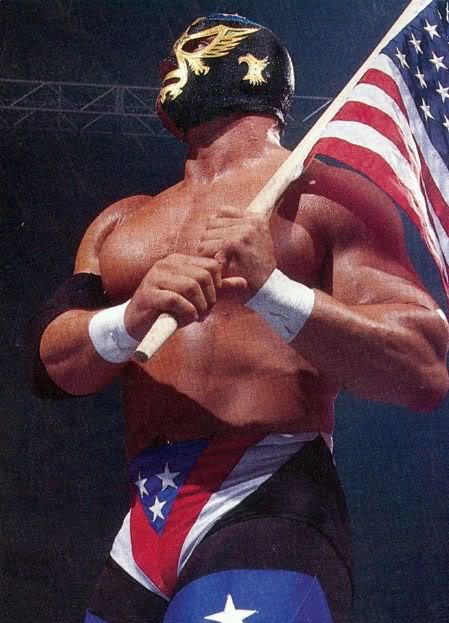 “I’ve been fortunate since I started doing the character to meet a lot of great wrestling fans, but it’s always special to meet men and women who serve our country. I have been on tours overseas, and to see the elite people who have made a career out of protecting our freedom…”

“They’ve decided that’s what they want to do, to make those sacrifices for the rest of us. So, to get the chance to thank them personally for that commitment they’ve made, and maybe bring them a little bit of joy, is always an honor.”

Del Wilkes never really saw The Patriot as a super hero. More of a common embodiment of a spirit we all share as Americans. It’s probably the same reason why no one else could have worn the Golden Eagle mask quite like he did.

“I don’t think there’s anybody else who could have played The Patriot better than I did, because it’s truly who I am… Inside and out.” Wilkes said. “I truly love this great country. and everything that it stands for.”

“I was never ashamed to wear that. And, I’m certainly not ashamed of it today. As a matter of fact, I’m more proud than ever.” 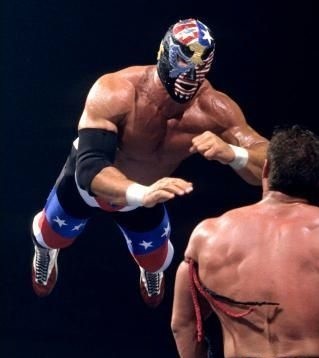 IN HONOR OF THIS MEMORIAL DAY, WE PLEASE ASK THAT YOU CONSIDER A DONATION TO THE WOUNDED WARRIORS PROJECT