For Tim Storm, his ascension to the NWA World Heavyweight title was filled with many wild battles in hundreds of little cow towns.  Toiling far from the spotlight at times, the 52-year-old champion is a throwback to the days when a ring hand wore out the leather on the bottom of his boots by paying his dues. And for a guy who was raised in Arkansas, a hotbed of NWA southern ‘rasslin’ tradition, that label is a perfect fit.

“Growing up where I did, television-wise, I got Memphis wrestling in the morning, in the afternoon I got Georgia Championship Wrestling, and at night I got World Class with the Von Erichs,” Storm told TheGorillaPosition.com this week, as he was preparing for a huge title defense this Sunday at Championship Wrestling From Hollywood. “I was getting some of the best wrestling, not just in the country, but in the world, As a kid, I started scheduling my Saturdays around those times. I wasn’t watching cartoons; I was watching wrestling.”

“They all drew me. Certain people influenced me from the very beginning, but those guys from the NWA were the ones who held my attention.”

He eventually loaded up his six guns and took aim at the title, becoming the oldest competitor in history to grab the NWA crown, when he defeated Jax Dane in Sherman, Texas, on October 21, 2016. And, like those who came before him, the victory was a life-altering experience for the new champ.

“Every time I hear (being announced as the champion), I’m like a little kid- I start smiling,” he said, about holding the belt. “It still makes me proud, and smile. It is, literally, the forerunner to every world title in every organization that you see today. When you look throughout history, everybody has been connected with the NWA at some point.”

For Storm, delivering the sacred belt back to a level of prominence and respect is one of his main goals. That same holy grail he currently possesses has once been the property of an endless list of legends, and he says it’s an honor he takes on with respect and humility.

“I will never, ever compare myself to those guys that I grew up wanting to be,” he said, citing names like Ric Flair, Terry Funk and Dusty Rhodes, among others, on the NWA’s roll call of titleholders.  “Even though I say I wouldn’t compare my talent, necessarily, with those guys. I knew that the night that I won it was incredibly emotional for me.”

Storm was the man carrying the banner for the NWA earlier this year, when it was purchased by musician Billy Corgan. The Smashing Pumpkins frontman had previously been a stakeholder with TNA Wrestling; a muddled management situation led to a him leaving the oft-troubled company.

Since then, Corgan has circled the wagons and plans to breathe new life into wrestling’s oldest and grandest organization.

“The majority of my title reign had been under the old ownership, and I had a good relationship with those guys,” he recalled. “When we found out the company had been sold, there was a huge question mark for me, having the belt… Like, what are they going to feel abut having a 52-year-old champ?“ 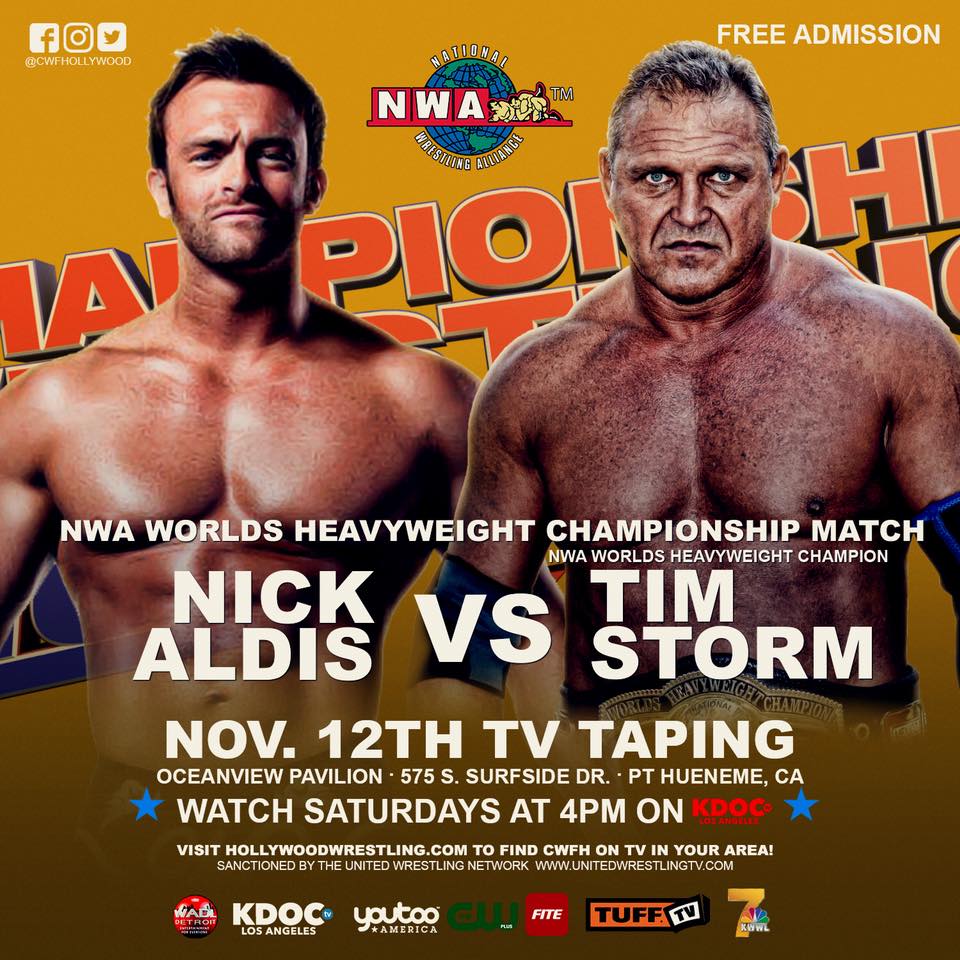 Thankfully, for Storm, Corgan and producer Dave Lagana have given the Alliance a fresh makeover, and pushed their veteran titleholder by featuring him in the online documentary series, ‘10 Ten Pounds of Gold‘.

As he rides into Port Hueneme, California, this weekend, with six guns at his side, he knows very well that this Sunday showdown could be his last run with the gold.

“My one thing was: I don’t know how long I’ll be able to hold on to this, but I knew that my name was going to be on the list for the rest of time. And, that will never change.”

And, if the sun sets there, at Oceanview Pavilion, he knows exactly what kind of legacy he hopes to leave behind from his tenure with the title.

“When I lose that championship, I might be done with wrestling ,” Storm said. “I won’t say for sure, but I don’t know. I just can’t wrap my head around being introduced as a former NWA Worlds Heavyweight champion.”

“I think one of the biggest compliments that people can say about me, is that I want to be known as the consummate professional. I want people to look at what I end up with in the end, and how I protected the legacy.”

That’s a vision for the future. As for now, the gunslinger is loaded up and ready for his face off with Aldis in the City of Angels.

“I’m not nervous. I’m like everyone else… I’m just curious to see how it all turns out.”

LISTEN TO THE FULL INTERVIEW HERE: