Mixed martial arts is a dangerous sport by any measure of the word. Yes, there is beauty to behold in the grace and speed with which an athlete can dodge or land a punch or kick or lock on a submission out of seemingly nowhere, but there is also inherent brutality in attempting to remove a man’s consciousness or endeavoring to inflict a level of pain so intense that one of the world’s toughest athletes breaks and submits. Inside the cage (or ring, depending upon the promotion), fighters depend on a referee, a cageside physician, and their own corners to keep them safe, to protect them from making bad decisions in the spirit of competition and toughness that will haunt them for the rest of their lives. Referees stop many fights over the objection of a losing fighter when they feel that the fighter cannot intelligently defend themselves, may be concussed, or if they hear a scream of pain due to a submission hold. Doctors examine cuts and cognitive abilities to determine the wisdom of continuing a fight, despite a fighter’s objections. In rare cases, a fighter’s own corner will intervene, preventing their fighter from enduring damage that the fighter themselves seemed willing to endure. However, with all of these safety measures, there is one glaring exception, one inherently dangerous aspect of the sport, that promotions and regulatory bodies have historically not regulated very well: weight cutting.

Cutting weight is a tradition in combat sports as athletes attempt to lower their body weight in order to be allowed to compete in a division with smaller opponents. For those unfamiliar with the process of cutting weight in combat sports, the term does not refer to dieting and exercise in order to get to a healthy weight. Those are components to be sure, but the major problem is that the vast majority of fighters cut 15-20 pounds (or more!) in the last few days before a fight by dehydrating themselves. Then, after weighing in, fighters scramble to rehydrate in time for the fight. This leaves them weighing much more than the weight they weighed in at, giving them a supposed competitive advantage. 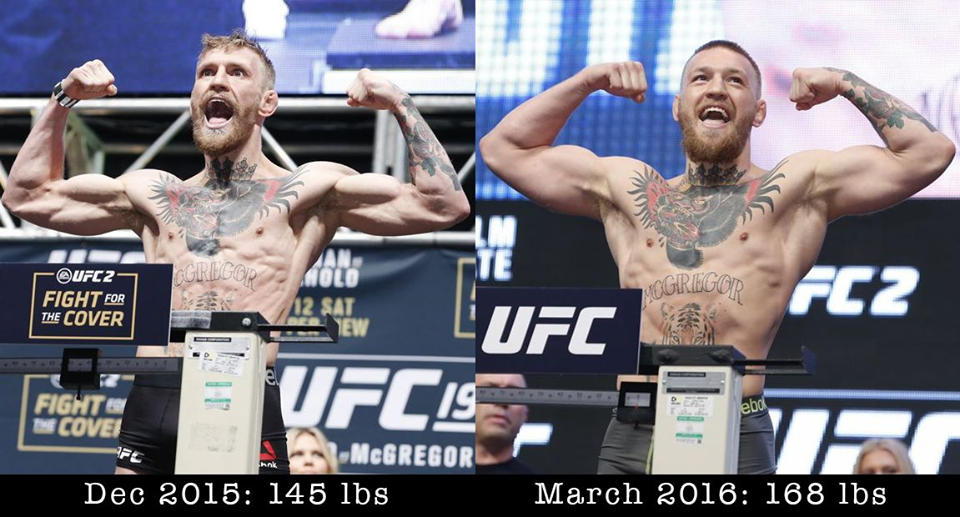 THE PROBLEM WITH CUTTING WEIGHT

Is this process really a problem, though? The practice has been around for many decades in all combat sports, and the athletes seem to just see it as a fact of life. Why should there be any concern over changing it? In an interview with Bleacher Report, Andy Foster, the head of the California State Athletic Commission said, “This is the biggest problem in combat sports. Five or 10 percent of people are doping. The number of people dehydrating is much, much higher… [Weight cutting is] a traumatic event. Then the very next day, you combine that with another traumatic event, and that’s called a fight. Combine these two things, and you’re just asking for trouble.”

What are the effects of these dehydration regimens? According to a study conducted by a cohort led by Emerson Franchini that was published in the Journal of the International Society of Sports Nutrition, weight cutting via dehydration leads to lost aerobic and anaerobic performance, inability to focus and concentrate, and a higher risk of injury. Dehydration also reduces the amount of cerebrospinal fluid that is available to cushion the brain from injury. In a fighter, that is especially dangerous as it leads to easier knockouts and higher risk of serious concussion. In an era when the dangers of CTE are becoming clear, promoters and commissions should be doing everything possible to decrease, not increase, concussions. There are other effects. A report by the Association of Ringside Physicians states that some of the effects of rapid weight loss due to dehydration include kidney problems, brain issues, and vision problems. The BBC followed an MMA fighter during his weight cut procedure to monitor the effects. The report details the effects on the fighter of his cut. It also discusses how one of the most anticipated fights of 2017 was cancelled when Khabib Nurmagomedov had to be rushed to the hospital due to complications stemming from his weight cut. Sadly, the article also discusses the fates of Brazilian fighter Leandro Souza and China’s Yang Jian Bing, both of who died during weight cuts in the last few years.

It is clear that weight cutting is a severe problem in MMA, but what can be done about it? After Yang Jian Bing died from his weight cut in 2015 while preparing for a fight in ONE Championship, an Asian-based mixed martial arts promotion, the organization decided to step in and make some changes. First, they required every athlete under contract to the promotion to weigh themselves regularly and enter the data in a dedicated web portal. The promotion then collates that data and assigns the fighter a weight class based on the information. Fighters are not allowed to change weight classes within eight weeks of a fight. Second, the promotion carefully monitors fighters during fight week. Fighters must be on weight to begin the week, and they must pass a hydration test. They are then weighed and hydration tested again three hours before the event starts. If a fighter misses weight either time or fails the hydration tests, they are disqualified from fighting in the event. ONE also reserves the right to test the fighter at any time during fight week to ensure proper hydration protocols are being followed. Finally, fighters that want to change weight classes between events must petition the promotion and prove that they can make the weight while passing a hydration test. If they cannot, they are denied the right to make the switch. Because there are no athletic commissions to deal with in Asia, ONE was able to set these rules and enforce them without government interference.

In the United States, however, there are the state athletic commissions that tax and regulate the sport, and they get to set the minimum rules. This leads to a patchwork of rules that can differ from state to state, though states often share and adopt best practices from one another. The chairman of the California State Athletic Commission, Andy Foster, has been a proponent of improved management of the weight cutting process, and he has proposed a bold plan to improve the safety of the process. First, Mr. Foster has suggested that fighters be licensed based on their weight class, as opposed to the open weight licensing currently in effect. Fighters would be required to submit the lowest weight class at which they might want to fight and answer some questions regarding their use of dehydration and their history of making weight. That information, coupled with a medical exam, would then be used to decide if the fighter would be allowed to be licensed at that weight. Under this plan, a fighter could always move up a class with no restrictions, but they would have to pass another medical exam to move down a class. Second, the commission is proposing more weight classes at 165, 175, 195, and 225 pounds, respectively, and the elimination of the 170-pound class. The net effect of this change would be to prevent fighters from having to cut as much weight to make it to their best weight class. The third change suggested by the CSAC director is to maintain a database of the original weight that a fighter signs a contract and whether or not the athlete makes weight for that fight. This will provide the commission with useful information when deciding to license a fighter in a particular weight class. Fourth, Mr. Foster has proposed that the commission refuse to license a fighter at a weight class for which they have missed weight more than once. Fifth, weight checks thirty days and ten days prior to a fight are being proposed. The final change proposed to the CSAC by Mr. Foster is the institution of dehydration tests similar to the ones required by ONE. These changes are a mixed bag, and arguments can be made for and against some of them, but at least the CSAC is trying to do something to limit the magnitude of the weight cutting problem in the sport.

More change is needed, and the UFC, as the largest promotion, should be at the vanguard of that change. But how? Aren’t they at the mercy of the athletic commissions, as they claim? Yes and no. The athletic commissions will set requirements that the UFC and its fighters have to meet, but there is no reason the UFC cannot utilize more stringent standards than any state requires. If New York, for instance, does not require hydration testing, there is no reason that the UFC cannot institute its own requirements. The promotion cannot be more lenient than the state in question requires, but it can certainly be stricter. For an example of this ability, one has to look no further than the promotion’s drug policy. There are about as many different regulations for drug testing fighters as there are athletic commissions, but after a great fan outburst about the prevalence of performance enhancing drugs in the sport, the UFC instituted its own drug policy that is tougher than most of the commissions’ policies. That has certainly not led to any issues with the commissions, and putting the fighters’ safety first would not either. Plus, when the UFC holds events outside the US, it is often its own regulating body as few other countries have a system of commissions similar to the US. There are lots of things that can be done to alleviate this terrible plague on the sport, someone just has to step up and do them.