Bellator made its inaugural appearance in Madison Square Garden on Saturday night while the UFC had a rare Sunday night card in Oklahoma City. The cards had some great fights and a decent amount of controversy. Below are my top takes from each event:

Michael Chandler lost his Bellator lightweight title to a broken ankle caused by a freak misstep early in the first round of his title defense against Brent Primus. Of course, if a fight has to be stopped due to injury, the other fighter is awarded the victory, so that 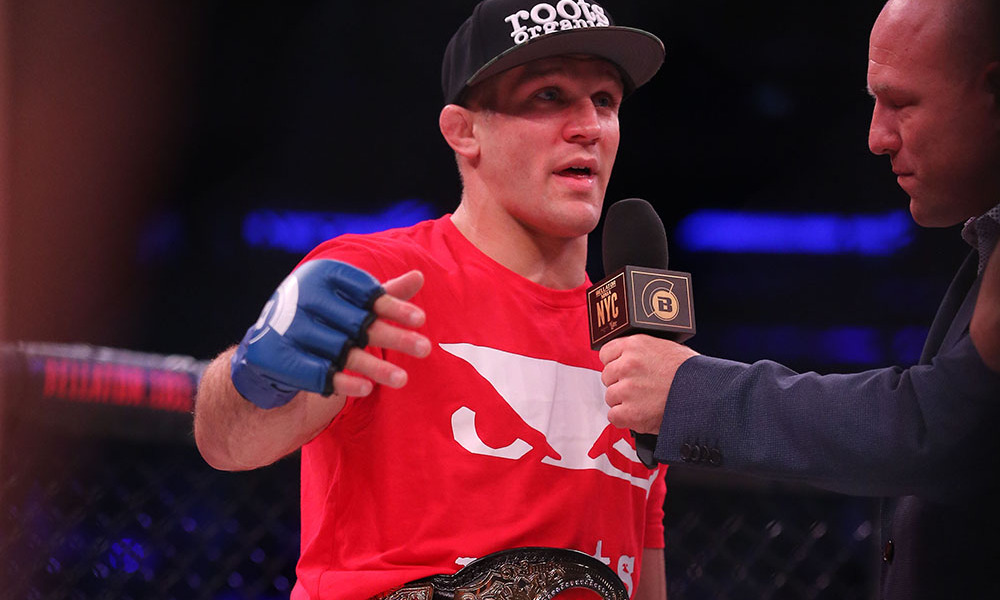 wasn’t the issue. The problem was that, once again, the New York State Athletic Commission seemed to misunderstand the rules of the sport. Referee Todd Anderson, who probably should have stopped this fight a little sooner since Chandler several times fell over on his own and clearly couldn’t put the slightest bit of weight on his left ankle, called time out with ??? left in the first round to have the doctor look at the injury. Under the Unified Rules of Mixed Martial Arts, which NYSAC has adopted to govern the sport in New York, any stoppage due to injury during a round is an automatic injury TKO. Anderson, however, waited for the doctor to examine Chandler and tell him that Mike was unable to continue before waving the fight off. One might think that after a similar fiasco in the Chris Weidman-Gegard Moussasi fight in Buffalo in April that the NYSAC would have stressed this particular rule to its referees to ensure it didn’t make the same mistake in two consecutive major events, but apparently not. NYSAC keeps making themselves look incompetent after years of the state looking corrupt in how it blocked the sport. Perhaps the state legislature wasn’t blocking the sport just for the bribes it received, but also because it knew how incompetent its athletic commission is and how stupid they would make themselves look. Who knows? Betting bonus: Chandler with the first-round KO in the rematch. He was hurting Primus on a broken ankle. He will destroy the guy with both feet under him.

The Last Emperor, the greatest heavyweight mixed martial artist of all time to this point, returned to legitimate competition for the first time in six years on Saturday night at Madison Square Garden. After four wins against very subpar competition and an extremely questionable decision victory over Fabio Maldonado a year ago in Russia, Emilianenko steeped into the Bellator cage against former New York Giants defensive tackle Matt “Meathead” Mitrione. Mitrione, wary of Fedor’s legendary power, stayed moving for the first minute of the fight. Once he planted his feet to deliver a punch, Fedor swung as well. They landed simultaneous right hands on each other’s jaws resulting in a rare double knockdown that has to be seen to be believed. Unfortunately for the legend, Mitrione is younger and recovered faster and jumped on the Emperor, knocking him out in a few seconds. Fedor still clearly has the power to be a threat to any heavyweight, but he no longer has any of the other skills necessary to compete at the highest level. The conventional wisdom is that power is the last attribute a fighter loses, and so it is with Emilianenko, but he has seen the rest of his skills deteriorate. Fedor will probably fight again, but it should not be against top competition.

Only Chael Sonnen can set up his next TWO paydays in one post-fight interview. After beating up Wandy for fifteen minutes, Chael managed to reestablish himself as the true heel by insulting New York and its fans. Tito Ortiz, who defeated Sonnen in a somewhat 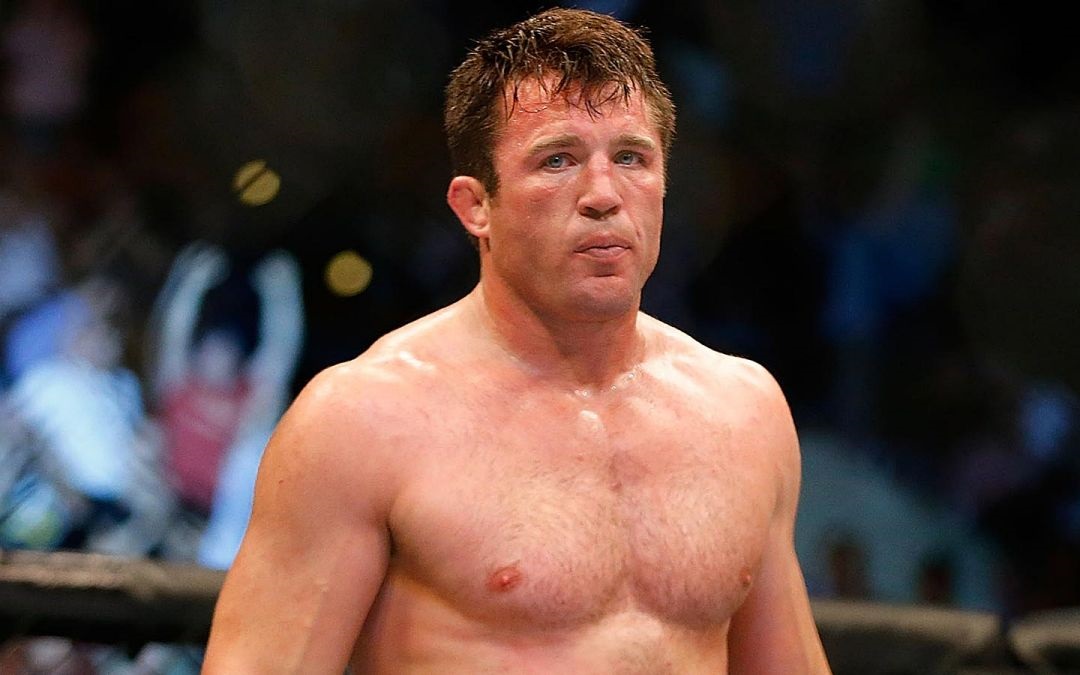 controversial matchup in January, was in the front row for this event, heckling Chael during and after the fight, clearly looking to get some sort of recognition or call out. In a stroke of brilliance, Chael ignored Tito and called out Fedor Emilianenko, insulting him in the process as only the Bad Guy can do. This move will likely bring Chael another big payday against another aging legend. Also, by ignoring Tito completely, Sonnen is using the Huntington Beach Bad Boy’s outsize ego against him. Had Chael called out Tito, Ortiz would have likely been satisfied with the ego boost and then declined any possible fight because he’s retired and has already beaten Chael. However, by ignoring him, Sonnen has increased the likelihood that Tito’s ego forces him to demand a rematch, thereby setting up Sonnen’s revenge and grabbing him a second huge payday…all in one promo. Conor McGregor may be the new King of Talk, but Chael proved once again that he’s still the master.

As I discussed in my preview of the Bellator pay-per-view, Aaron Pico was the biggest prospect in the history of the sport going into his first fight. ESPN said so. Pico’s background in wrestling, boxing, and pankration certainly said so. However, in 24 seconds on Saturday night, Zach Freeman showed that anything can happen in MMA. He dropped the phenom with a quick uppercut and then applied a guillotine choke that certainly didn’t look extremely secure (hands weren’t even locked) but led to a very fast tap out from Pico. Don’t get me wrong, Aaron Pico could still go on to have a marvelous career as a mixed martial artist, but no matter how great he becomes, the potential he had for superstardom has been greatly diminished. Bellator has invested a lot in this young man, and the goal was to build him very quickly into a championship contender in the lightweight division. Instead, he got finished by a pretty low-tier fighter and showed absolutely no heart in his debut matchup.

We have all heard that you should never leave it to the judges, which is an enticing idea, but these judges should be expected to do their job properly. This is a professional sport, and the athletes’ livelihood depends on the ability to trust everyone involved in the sport (referees, judges, promoters, and commissions) to do their jobs with professionalism. Darrell Horcher and Devin Powell fought for fifteen minutes, and Horcher earned a split decision victory for his efforts. The problem is that the first two rounds were so lopsidedly in favor of Darrell Horcher that they could have more legitimately been scored 10-8 for Horcher than 10-9 for Powell 9i scored both 10-9 for Horcher). Somehow, judge Marcos Rosales seems to have been watching an entirely different fight than everyone else as he scored the first round for Powell. I recognize that disciplining bad judges is a difficult proposition because no one wants to feel like judges are feeling pressure to decide for one fighter over another, but there needs to be a review process that sanctions truly egregious decisions. This errant judge didn’t affect the outcome, but too often they do, and the capacity this leaves for corruption necessitates greater oversight.

Felice Herrig, a pioneer of women’s MMA, lost to Paige VanZant in April of 2015 to fall to 10-6 as a pro, 1-2 in the UFC. Following that loss, Herrig revealed that she had been battling anxiety and depression for many years. She took some time off to see a doctor and focus on her mental health. Fourteen months later, Felice returned to the Octagon with a rear naked choke finish of Kailin Curran that earned her a Performance of the Night bonus. She followed that up with a huge decision victory over Alexa Grasso. Then, on Sunday night, she climbed into the cage in Oklahoma City opposite the heretofore undefeated Justine Kish. Herrig, a former Muay Thai champion, spent most of her mixed martial arts career as a good clinch fighter with a huge heart, but technically challenged (to say the least) in all other aspects of the sport. Against Kish, Herrig showed improved, if still a little sloppy, boxing and an outstanding ground game that saw her take Kish down and pretty much control her at will for most of the fight despite Kish’s clear strength advantage. If Felice continues to improve her boxing, she can grow into a top five contender in the strawweight division. Having finally cleared her head to allow herself to focus on her craft, Herrig is making great strides and is a completely different fighter than the one that lost to Van Zant in 2015. If they rematch, I’d put all my money on Herrig to dominate that fight.

But in a worse way. On March 15, 2014, Hendricks defeated Robbie Lawler via unanimous decision to win the vacant UFC welterweight championship. That win drove his pro record to 16-2, one of those losses being a controversial split decision to Georges St. Pierre, the greatest welterweight of all time, that many viewers and commentators thought Hendricks had won. In the wake of that title victory, however, Big Rig went 1-4 in the division and failed to make weight three times. After his last missed weight, Hendricks moved up to middleweight where he scored a decision victory over Hector Lombard. That brings us to this weekend when Hendricks was given an opportunity to showcase his talents against a lower-level gatekeeper in front of his hometown fans. Unfortunately, Hendricks began the weekend by once again missing weight, this time for a middleweight fight. Then he proceeded to get knocked out by Tim Boetsch who was 4-7 in his last 11 UFC contests. The once mighty Big Rig has fallen on hard times. I don’t know if he is finished as a title contender or if he has a resurgence left in him, but he needs to figure out the answer to that soon before it is answered for him.

Michael Chiesa and Kevin Lee climbed into the cage for the main event in Oklahoma City, and the only round of the fight was very entertaining, but it ended in very controversial fashion. Lee escaped several submission attempts by Chiesa and made his way to Mike’s back to sink in the rear naked choke. Chiesa was fighting to escape the choke or survive to the bell when referee Mario Yamasaki inexplicably stopped the fight and awarded a submission victory to Lee with 23 seconds remaining on the clock. Chiesa never tapped out or lost consciousness, and he was livid after the fight, saying in the post-fight press conference that Yamasaki should never be allowed to officiate again. Yamasaki also earned the ire of Dana White (not really difficult to do) and the entire crowd in OKC for his very poor judgement call. As I said before, these fighters rely on professionalism from the officials involved in this sport, and Mario Yamasaki really let Michael Chiesa, and all of us, down with his performance on Sunday night.