It’s that time once again, friends. So buckle up and hold on, as we cruise back to the days of wrestling greats and relive the stories of the road. With all the winter weather this week, I felt it appropriate to head to the home of cold chill. The blustery north of Canada is our destination. Specifically the Vancouver based All Star Wrestling promotion, in the 60‘s and 70‘s. 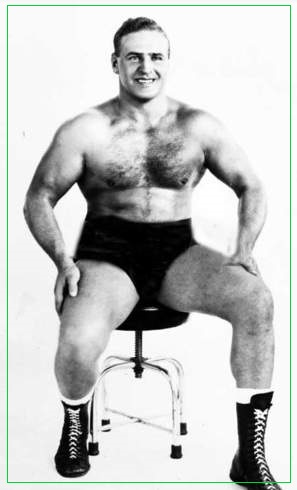 As anyone that has been there knows; life out on the road has it’s ups and downs. It can be dangerous, if you’re not up to the challenge. The dangers of the Canadian North can come in many forms, and you have to be on your toes at all times to avoid them. One such incarnation can be most treacherous and deadly if you’re not ready for it. Veteran wrestler, Roy McClarty, would find this out firsthand one night during a trip to Vernon. He was traveling with two other workers, Steven Little Bear and George “Flash” Gordon. Not far out of the town of Hope they hit a patch of black ice and the car went out of control. As the car careened sideways down the road they came directly in the path of a semi tractor trailer. The collision left then on the side of the road, and Roy’s head thru the windshield. The paramedics found him bleeding badly, and his two passengers hadn’t fared much better. The first responders tried to get him to go to the hospital and get medical attention but the only thing on his mind, besides the shattered remains of the windshield, was making it to the show on time. He famously told them that he had never been late or missed a show and he wasn’t about to start now. The three men hitched a ride, arriving at the venue only minutes before their match. It is this type of dedication and sacrifice that separates great workers from the rest.

Roy was a true journeyman wrestler. He worked all over the United States, in the United Kingdom and overseas in Japan. He also worked with Vince Sr. and the WWWF during his career. Toward the end, he began to wind things down and work more locally in Vancouver as the ring crew foreman for ASW. He drove between towns and helped to mentor the green talent that was coming up thru the territory.

A young Jake Roberts was working his way thru the territory in the late 70‘s and had made his way up to Canada to work the territory. He had the in ring charisma that could draw a crowd and keep them coming back. He was still learning the business but it was obvious he had “it”. The promoter of ASW, Al Tomko, decided that it would be a good idea for the young Roberts to ride with McClarty and learn about the business as they traveled the roads together. Anytime that guys spend enough time like that, ribs are bound to come into play at some point to relieve the stress of the road. One evening, as they traveled thru central British Columbia the moment presented itself for Roy to get a good one over on Jake.

Roy was driving the car with Jake and another worker, Kevin Jefferies, after a show when the opportunity presented itself. As they were passing a large grove of apple trees, McClarty slowed the car to a quiet stop and pointed out of the window to the trees, telling the young Roberts to go out there and get a few apples for his kids. He wasn’t too sure about the idea, but Jefferies agreed to go along and talked him into it. Little did Jake know, that Jefferies was in on the rib. As the two got out into the orchard and began to pick apples, the owner was alerted to their light handed activities and gave chase thru the trees. He was screaming at the pair and they tore through the orchard to the waiting car. Roberts, miraculously had managed to make it back to the car with a few apples. He jumped back into the rolling car and they all had a good laugh over it. I’m not sure if Jake ever found out that his apple picking partner was involved, or if the owner of the apple orchard was in on the whole thing. I’d like to know that myself. Hahahahaha. Roy got one over on Jake that night, and gave the Snake a story to pass on the the young workers he would go on to put over and teach the ways of the road.

On a related note, Roy will be receiving the Posthumous Award this year at the Cauliflower Alley Club’s annual meeting on May 1st in Las Vegas, Nevada. His daughter, Kelly will be accepting on his behalf. Bruiser Brody, Eddie Sullivan, and George “Scrap Iron” Gadaski, among others, have been recipients of this award in the past.

Well, that brings us home on another journey down the roads. Please continue to join us for more tales of the gauntlet that is the road trip. We look forward to seeing you back here again, and as always; Keep the wheels turning and the freedom burning. See you next time Bruthas and Sistas. Peace.