Welcome back friends.  So far in this series we’ve taken a look at how ribs can be used as teaching tools, and as tests of heart and dedication.  In this installment I wanna look at how a rib can used as a reward.  So let’s take a trip up to the Beantown area for a look into what happened, at a New England Championship Wrestling event in Framingham, Mass.

The year was 2005.  A young ring boy named Frankie Arion had been working matches through the territory and was really growing a following with the kids in the crowd.  During a match in which he was injured and had to be “taken to the hospital” on a stretcher after the match, he had gotten so over with them that the youngsters demanded to know if he was alright, and what hospital he had been taken to for treatment.  They had gotten so pulled in by the spot and the work.  This caught the eye of promoter Sheldon Goldberg, and a plan began to develop.
One month later they were back in the Framingham area.  A match was made giving Arion a shot at the NECW title, and champ Michael Sane.  Goldberg got together with Sane and the booker for the match, Bob Evans. The colluded to allow Arion to win the belt that night without his knowledge, as a reward for his hard work and dedication to the promotion. This was also going to put him even more over with his fans in the crowd. It would be a fluke win, and Sane would regain the belt at the next show.  All were in agreement on the rib.  As match time approached it became know that Arion’s parents would be in the crowd as well. This was really the icing on the cake, because it meant that his parents would be there to see him win the belt. 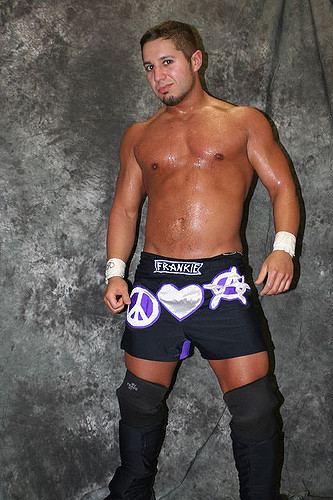 The bell rang and the match began to unfold.  Slowly, one at a time workers began to file out of the back area, surrounding the ring in a lumberjack type fashion. At a spot in the match Frankie was supposed to hit a high cross body off the top rope on Sane and be pulled outside the ring for a Pier 6 brawl.  That was the signal for the rib.  As Arion landed and hit his move on Sane, the ref fell for a count.  In Frankie’s mind of how the match was going to work, it would be a near fall and things would go on for him to lose to Sane.  The champ was ready and grabbed Frankie and held him on top of him for the full three count and win.  Arion popped up with a look of dismay, not knowing what was happening.  All the baby faces hit the ring and hoisted him up on their shoulders, carrying him around the ring.  Even as he was presented the belt by Goldberg, he wasn’t sure of what was happening.  It wasn’t a forever run, but for that night, in front of his fans and family, HE was the champ, and that’s all that mattered.
The following week Frankie’s win and their match was highlighted in The Framingham Tab, their local newspaper. I feel that giving back to the people that help raise you up is essential for the growth of the wrestling business.  With so much selfishness and ego in the business, it’s good to see that people still see the bigger picture. Realizing that without a strong foundation, no heights of success can be attained in anything you try.

Keep your eyes open for a special interview this week by our EIC, Ryan Boman, taking a closer look at NECW.  In particular, talking about a new video series from the promotion about its long history and all the stars that have passed its doors.  Until next week Bruthas and Sistas. Remember to keep the wheels turning and the freedom burning. I’ll see you out on the road.  Peace.