Welcome back once again Bruthas and Sistas, as we head out this week our travels takes us on a road trip from Ohio to San Antonio and back as we take a ride with Bobby Fulton, one half of the legendary tag team The Fantastics. I reached out to Bobby and he was kind enough to sit down with me for a chat about old school wrestling, and the journey of paying dues.

Bobby started his training and wrestling career at the young age of sixteen in his home state of Ohio. It was the late Seventies when he took to the roads to begin his climb up the learning tree. It was during his first trip to the Northeast that was exposed to the hijinks of the boys. While working for Vince McMahon Sr. and the WWWF, he was doing television tapings in Allentown, Pennsylvania. The locker room was full that afternoon, and the wrestlers were milling around between matches. Stan “The Man” Stasiak caught Bobby not paying attention and stuck a long piece of sports tape to his boot and lit it on fire. It took him a minute to realize what they were laughing at until Stasiak yelled “Hot foot!”. While he may have not seen the humor in it, the boys had a good laugh at his expense. Bobby wasn’t there long enough to send “The Man” a receipt, as he was headed off to the Volunteer State soon after. 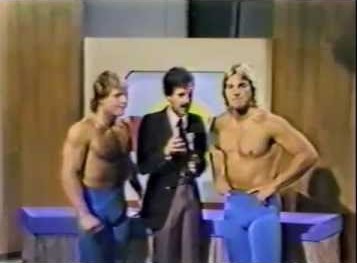 He traveled through Tennessee, where he met his in ring brother and long time friend, Eric Embry. The two wrestled as Bobby and Don Fulton for a short time in the Nashville area. He moved east to Knoxville and met up with another great hand in the ring. He and Terry Taylor worked as a tag team there and he got just a taste of the success he would later find under the name Fantastic, while they competed as The Fantastic Ones. Bobby had nothing but good things to say about both of these men as he talked about his time there with me. It wasn’t long before he was off again and worked for a promotion that was close to my heart, and my hometown.

Bobby worked for the “outlaw”, Poffo ran, ICW promotion for a short time as well. He told me about a time when they were out on the road, working out of Louisville, Ky. on a tour through Western Kentucky and into Southeast Missouri. The crew stopped off at a favorite buffet in Cape Girardeau, Mo. to grab a bite and stretch their legs. During the meal, Bobby noticed Angelo Poffo was not at the table. He looked outside and saw Angelo in the window, but only for a second, then he was gone, and then he was back again. The odd behavior caught his attention and he was staring out the window at the promoter. One of the other boys noticed this, and informed him that Poffo was doing free squats. He regularly did so after a meal or during breaks out of the car. Once that had been revealed to him, it made a little more sense. The things you see when you’re out there. Hahahaha. 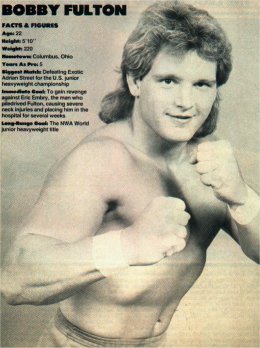 When his time at ICW/CWA came to an end, he and fellow wrestler, Tony Falk decided to head out to Texas and try their luck in that area. The two drove forty-eight hours straight through to San Antonio and the home of Southwest Championship Wrestling. As the pair walked into the HemisFair Arena, one of the first people Bobby saw was promoter Joe Blanchard. Bobby told me that when a promoter looks at you and sees money they have a special kind of twinkle in their eye. When he met Joe Blanchard, the man had that twinkle when he smiled at Fulton. He knew as soon as his first match there was over, and he saw his payout that he was going to have a bright future at SCW.

Nearly as soon as he arrived, Bobby was involved in a rivalry with English wrestler “Exotic” Adrian Street. The exotic one, accompanied by his valet/manager Miss Linda, would terrorize Fulton and the two built their rivalry to a series of scaffold matches. It was one of the bigger angles to be ran during the tenure of SCW as an active territory. Street also taught Fulton the value of not rushing in a match, when he took Bobby to the mat and stretched him until it was time to go home. Bobby captured his first Southwest Junior Heavyweight Championship from Street in Beaumont, Texas in 1984.

After another feud with former tag partner, Eric Embry, that also ended in a scaffold match, Fulton decided it was time to try out another territory and see what it had to offer. Little did he know it would change the course of his wrestling career forever. 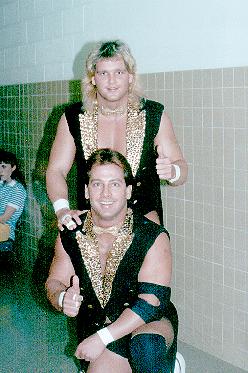 When a great tag team is firing on all cylinders, it’s a beautiful thing to watch. The synergy that the combination of Bobby Fulton and Tommy Rogers had produced magic in the ring. They stood out among their peers during this time and that was not an easy thing to do in the landscape of the tag team influenced Eighties. They were at the forefront, along with the Rock and Roll Express among others, during a time of transition in tag team wrestling from bigger mammoth teams to a sleeker, faster, form of high flying offense. The addition of more elaborate, tandem maneuvers also led to their rise in popularity. They rode the groundswell and had longstanding feuds with the R’n’R that crossed back and forth into the WCCW promotion. They also had a bloody feud with the Sheepherders, better known as The Bushwhackers, when they returned to Bill Watts’s newly re-launched UWF.

One night during their time at Georgia Championship they were working at the Norfolk Scope, and promoter Jim Barnett stopped to console the two after having, what was in their estimation, a lack luster match due to opponents that were too lazy, or disinterested to go the distance that night. Barnett walked up to the pair in the locker room and told them, “Boys, when you work as hard as you two do, you never have a bad match.”. It wasn’t just the fans that were taking notice of their tag team abilities either. Arn Anderson had also commented one evening that he liked following the pair, because they made him work harder. 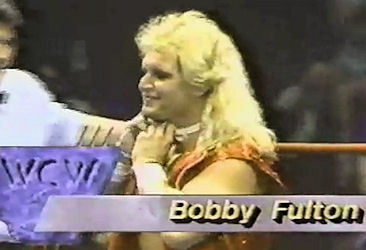 The Fantastics defeated the historic tag team of Arn Anderson and Tully Blanchard in New Orleans during the second round of the inaugural Jim Crockett Sr. Memorial Cup, which was held at The Superdome. They faced longtime rivals The Sheepherders in the quarter final round and battled to a double disqualification. Had they won, they would have faced the indomitable team of the Road Warriors in the semi-finals. The Legion of Doom went on to victory at the Crockett Cup.

The Fantastics would compete off and on for many years to follow in the United States and Japan. They even faced off against one another in singles competition during their time in the WWF’s Light Heavyweight Division in the Nineties. They duo also traveled to Puerto Rico and worked in the World Wrestling Council, not long after the death of Bruiser Brody in 1988. Bobby told me he had received a phone call from Jose’ Gonzalez while he was there, and said how surreal it was to be talking to the man that had killed his friend. He shared several Bruiser Brody stories with me, and I am so thankful for that. He was a favorite to us both. 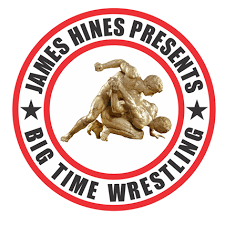 Beginning in the Nineties and continuing in the last few years, Bobby has been on the promotional side of things, while he maintained his in-ring career as well. He and his son, Dillon have been behind the World Classic Big Time Wrestling promotion in his home state of Ohio. Bobby has been embroiled in a feud with “Franchise” Shane Douglas and his rival promotion since 2016. This will come to a culmination at an event called the Superfest and Supershow on May 26th, at the Pickaway County Fairgrounds Coliseum, in Circleville, Ohio. The Fanfest starts at 9am and belltime for the matches is 8pm that evening. Lots of big names are set to appear in Circleville including Jim Cornette, “Franchise” Shane Douglas, and “Wildfire” Tommy Rich among others. Bobby has announced that he will be having his retirement match that evening. It will bring an end to what can only be described as a Hall of Fame career.

Well that brings us to the end of another installment of our ride, Bruthas and Sistas. With only a couple editions of this initial Road Stories and Ribs series left, we’re almost done with this leg of our journey. Bobby and Dillon were very accommodating to me, and I would like to extend thanks to them for that. On a personal note, as a Fantastics fan, I’d like to thank Bobby Fulton as well, for bringing not only myself, but the throngs of thousands of wrestling fans all the great matches and moments over his career. We thank you my Brutha, for all you’ve given us.

As you read this issue of RS&R this week, I’ll be in Las Vegas, spending time on the strip and at the CAC convention at The Gold Coast, as I try to catch up with friends, and sit down with a few of wrestling’s legends to try to secure connections for future columns. Until next we talk again Bruthas and Sistas, always remember….keep the wheels turning and the freedom burning. Peace. 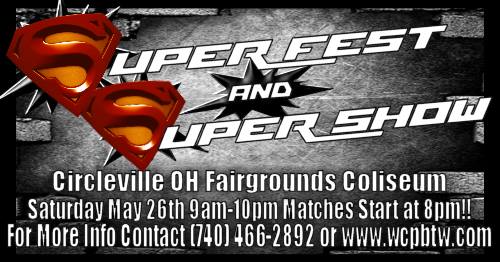 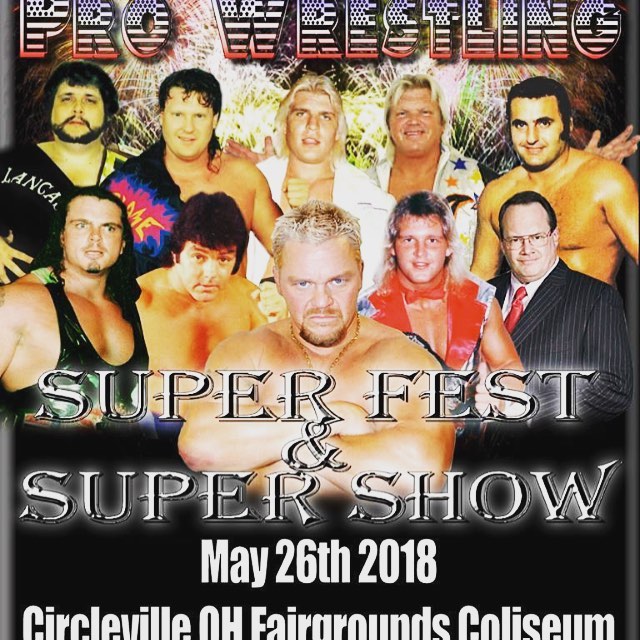