Welcome back once again friends, to our chronicles of the road soldiers. This week we’ll be taking a trip with me to the desert paradise of Las Vegas, with a brief stop over at the 2018 gathering of the Cauliflower Alley Club. So have a smoke and grab a cold beverage, cause we’re wheels up at Denver International Airport in ten minutes.

For me, the road trip is a seminal part of what makes up wrestling. Whether it be the critical conveyance to a payday for the workers, or the yellow brick road leading to the Emerald City for the fans who choose to undertake it, the road is a place where adventures lay eminent, and memories are made. 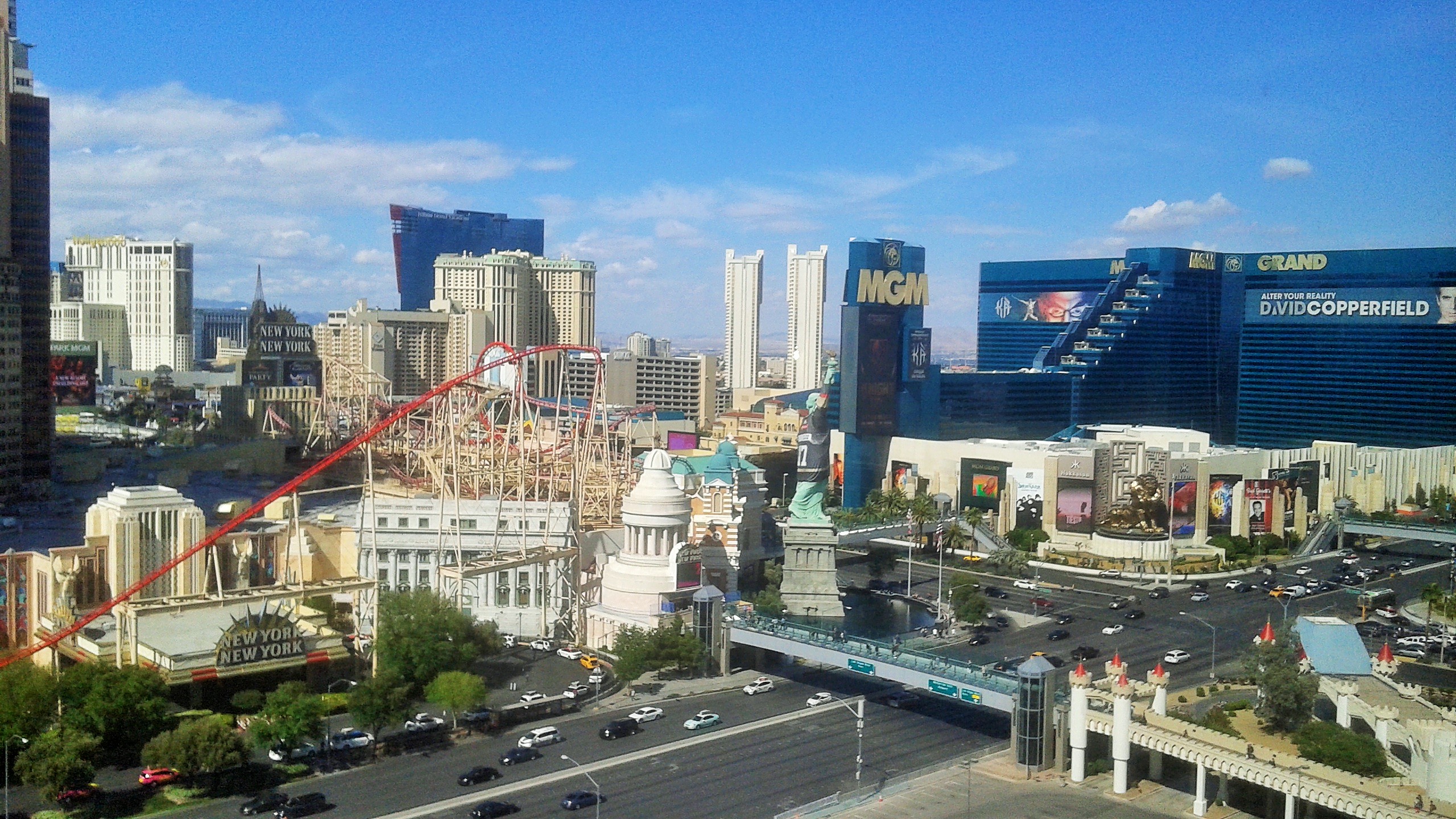 The very first story in this series was about my first trip to see a show at age five, and little has changed for me when it comes to that knot of excitement I get, just before embarking out to see a live event. I had been in a countdown to Vegas for a week plus prior to leaving. Not only was I going out to see some of my idols of wrestling and meet friends that I’ve made in the business, but I was going to get to see my best friend for the first time in several months. She lives in Atlanta, and though the distance can be a bit daunting, as I continue to move around the U.S., we find a way to get together, if even for a day or two. So, as you imagine, I was looking forward to this mini-vacation.

The TSA at DIA is, enthusiastic, to say the least. Anytime I enter there, I always have everything out of my pockets, and into my bag, belt included, except for I.D. and boarding pass just to try and ease my passage through those rapids. That being said, they usually hustle you along pretty fast if you know how to be ready for it. Just twenty short minutes later, I was at my gate ready to board.

I’m not sure if it’s the whirring roar of the engines, or the way you get pushed back into your seat, but I love take-off. I’ve always been an enthusiast of going fast, be it on four wheels or two, but that jolt that you get before you leave the ground, that is followed by the high climbing arc during take off, is the best part of flying. I’ve seen many folks close their eyes during this time, and once on a trip to St. Louis, I sat next to a woman that kept her head in a tucked, crash position for the entire flight. After the first hour, I thought she may have been passed out from blood loss to the brain, but a glancing, bank shot to the back of her head with an airplane peanut refuted that idea. Crass; possibly, rude;not for a heel, funny; every damn time! Hahahaha. Sometimes you gata be sure, right? On this trip however,, things went smooth and were quiet on the semi-full Boeing. It was only two hours until we were screeching to a taxied stop at McCarran Airport in Las Vegas. 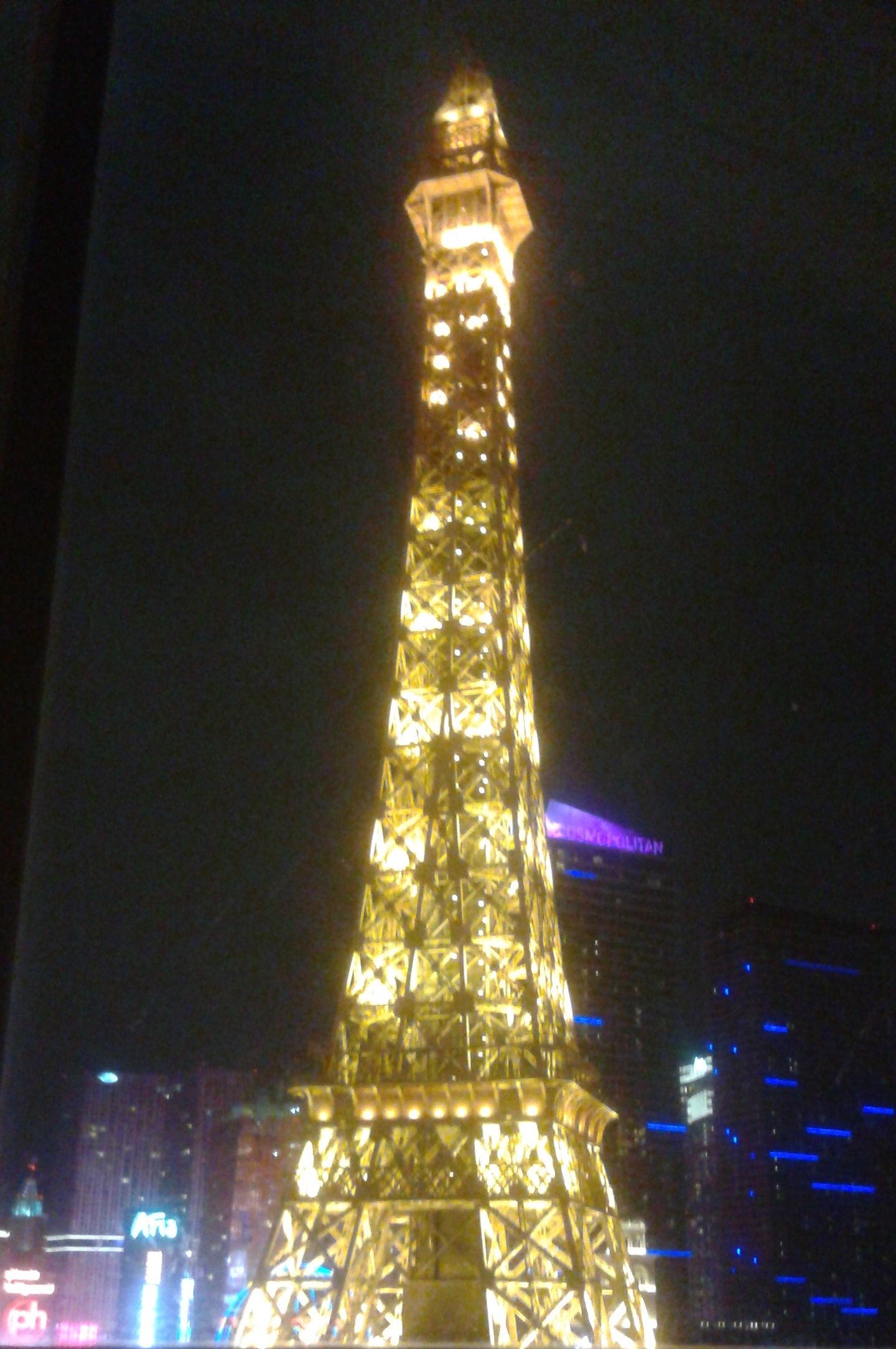 There is no doubt where you have landed in Las Vegas, when you hear the ching-ching of the slot machines in the gates. Standing on the moving walkway always makes me feel like I’m being taken away into a wonderland, with the flashing lights of the strip calling to me from off in the distance. One of my close friends likened it to Chuck. E. Cheese for adults, and I have to say, he’s not far off. Depending on what you’re looking for in entertainment, that city has something to offer you.

After a short taxi ride I was in my room at Bally’s, with an amazing view, looking towards the south end of the strip. The Paris, and the Bellagio Fountains were right our window. It was a postcard view to say the least. I would be a few more hours before Jalynne’s flight landed, so I headed straight to Gordon Ramsey Burger at Planet Hollywood to curb that desire. After destroying my Forest Burger and with a little time to spare I headed over to the Gold Coast to try and see everyone I could before I went out on the town later.

Once I got up to the second floor, one of the first faces I saw was that of Baron Von Raschke. I’ve never been much of a take pictures type, as I’ve always been at the event with a friend in the business, or in this case, representing an entity greater than myself. I shook his hand, introduced myself, and told him how much I enjoyed his work in the A.W.A.. We spoke for a few minutes before he had to leave. Just as soon as I left the Baron, I was talking to Rip McCord, as I entered the ballroom. It was packed with wrestling’s greats, and lots of young faces as well. I was able to speak with Gerald Brisco briefly, and also made my way back to spend a little time asking Pat Patterson about his Attitude Era run, before I saw it was time to head back to Bally’s so I could meet Jaylynne in the lobby.

The next several hours were spent walking around the strip, and hanging out until it was dark enough to ride The High Roller wheel at the Linq Hotel and Casino. The view from five hundred and fifty feet apex is amazing, and I highly recommend checking it out if you have the time. Once you start to ascend, you quickly forget that you’re moving, and loose yourself in the panoramic views beyond the glass walled sphere. Now, given the amount of drunken women in high heels that are all over the strip, I’m very surprised there hasn’t been a few of them bust their asses coming out of the sphere at the bottom, as once again, it does not stop moving. We had no problems getting on, or off, and it was an experience that I won’t forget. 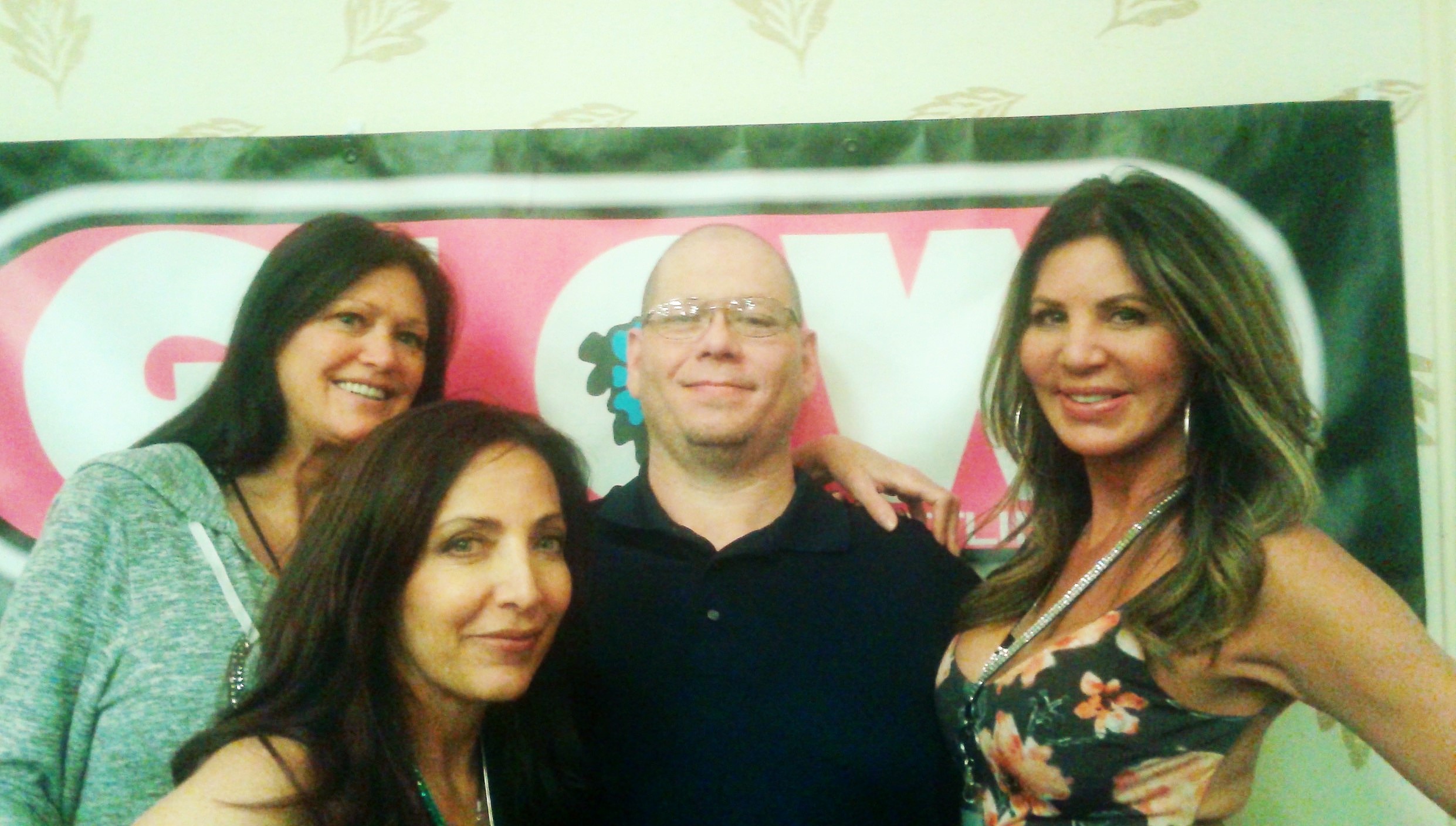 The following morning I headed back up to the Gold Coast to spend some more time. I ran into The Queen Heel herself and we were able to catch up for a few minutes, before I headed over to the G.L.O.W. area and chatted with two of my former interviewees, Patricia “Sunny” Summerland, and Jeanne “Hollywood” Basone. I was also met fellow G.L.O.W. alumni Lightning Rusa while talking with the ladies. The G.L.O.W. organization has been so good to me over the past year, and I look forward to a continued relationship with them. Right next to the Ladies was the team of Harlem Heat, Stevie Ray and Booker T, with Sharmell. We shook hands, and spoke about the Corey Graves heat, to which Book replied with all smiles and his signature laugh. He was on his way out after we spoke, and I kept working my way around the ballroom, when I came across Rob Van Dam. I passed along a business card, and we spoke about wrestling and his famous Spiderman cage stick during the Elimination Chamber match back in 2014. He was very gracious and took a lot of time to talk with me. I also spoke with the king of the two step, Sam Houston about some of his trials and tribulations outside of the ring. He has traveled a hard road, and walked a path that not many would be able see the other side of. The time flew by and before I knew it, I had to leave to make it back in time to go out for the evening.

Many of you know that when it comes to Pink Floyd, I am well beyond the average fan. When we found out that there was a Pink Floyd music and digital show in Las Vegas while we were in town, there wasn’t much that was going to keep me away. It was held at a small venue called The Dome at Container Park, near downtown. The whole neighborhood was an area that was being reclaimed by local residents and the city. It has a really welcoming vibe about it, and it is full of small shops and eateries. The park itself gets it’s name because all the structures are made from re-purposed shipping containers of all sizes. They have used them to create the three story complex, as well as a large castle style jungle gym for children as well as parents to enjoy. They also had a large area with astro-turf for small children to crawl and play on, as well as several large Lego blocks for them to play with. In the front of The Dome was a giant praying mantis made from steel, that shot fire out of it’s antennae, when manipulated by an operator seated inside it. We ate at a small diner type restaurant on the second level called The Downtown Terrace. It offered a variety of pub type fare along with several drink options, including Bottomless Drinks, open to close, for only sixteen dollars. Mimosas, bellinis, bloody Mary’s and house wines were included in the special, and I took full advantage of the offer. If you take a trip to Las Vegas and want to spend some casual, quiet time away form the strip, I’d recommend check it out. It’s a really great hidden treasure of the city, located on Fremont Street. 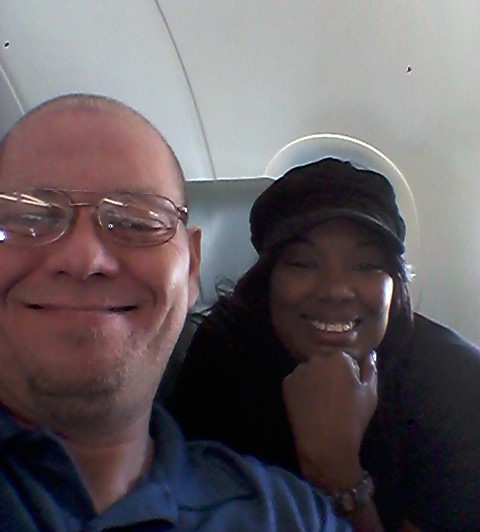 The short time I was in Vegas for this trip flew by. It seemed like I had just landed when I was headed back to McCarran to take off again. The trip was starting to wear on me though and the ride to the gate almost lulled me to sleep. I was given one last surprise when we started to board, and I saw Nyah Kennedy getting up. I spoke out and we had a laugh about the luck we had in getting to ride back to Denver together, where she was laying over on her way back to the Big Apple. The plane was barely loaded for the Thursday am flight, and I worked it out with the flight attendant to sit next to Nyah on the way back. We had lots of laughs and talked shop, and happenings at the CAC. We both drifted off once we were up in the air at cruising altitude.

I had one helluva good time while I was in Sin City. I got to have fellowship with some of my wrestling family and meet new friends along the way. It was great to finally meet up with some of the folks that I’ve worked with, and those I have admired for many years. Next year should be even better, as I will be living out there, if all things come off the way I have them planned. I wanna thank each and every one of you for following this series and laughing along at our road tales. I would also like to thank all the workers that took time to share stories of their travels, and polarizing moments of their wrestling journeys. Vordell Walker, Bruce Tharpe, Damien Wayne Kostyal, Kelly McClarty, Sheldon Goldberg, Silas Young, Doug Markham, Patricia Summerland, Tyra Russamee, Dimitrios Papadoniou, Nyah Kennedy, Jack Lord, Adrian Manera, Jeanne Basone, and Bobby Fulton….kudos for the memories!!

Road Stories and Ribs will return at the end of the summer to bring you more tales from the highways and biways of North America and beyond. Until then, always remember Bruthas and Sistas, keep the wheels turning and the freedom burning. Peace.