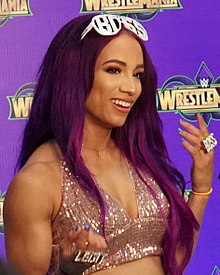 Since a telling post-match Raw scuffle between Nikki Cross and Bayley, the internet has been riddled with rumors of a potential Sasha Banks return. Banks has not been seen or heard from, save for scores of cryptic tweets, since WrestleMania 35 where a Tag Team Championship loss to The IIconics presumably forced her into exile.

With Bayley set to defend her SmackDown Women’s Championship against two opponents, the stage is set for Sasha Banks to return to WWE, after what seemed to be an acrimonious break from the company. Banks’ would-be return will also set the stage for looming contract negotiations for a top star in a booming wrestling market led by two billionaire-backed promotions in WWE and AEW.

Nothing is currently known about how much time is left on Sasha Banks’ current WWE deal, though she reportedly re-signed a multi-year deal with the promotion in 2018. Upon a possible return, whether or not Banks is doing so with a fresh start in mind—or to simply unfreeze her contract as part of a desperate sprint towards free agency—is anybody’s guess.