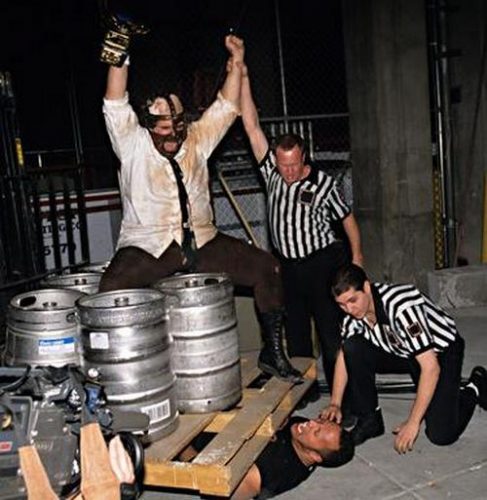 Twenty years after The Rock faced Mankind in an empty arena match during halftime of Super Bowl XXXII, WWE is bringing back “Halftime Heat.”

During halftime of Sunday’s Rams-Patriots matchup, WWE will air a six-man tag team match featuring some of the top talent from NXT. It will be Aleister Black, Ricochet and Velveteen Dream vs. Tommaso Ciampa, Johnny Gargano and Adam Cole.

WWE announced the match Sunday night before the Royal Rumble. Later in the night, during the Royal Rumble show, the promotion set up the match with footage from after Saturday night’s NXT TakeOver in which the six participants confront each other at the top of the ramp.

The original “Halftime Heat” aired on Jan. 31, 1999, featuring The Rock and Mankind battling it out inside an empty arena for the WWF Championship. It returned in 2000, during halftime of the Rams’ only Super Bowl win, but did not feature any new matches … Read the Full Story HERE