Sometimes… you’ve just got to spread your wings and fly.

That’s what Impact Wrestling’s Kiera Hogan seems to be doing lately. The young star has long been considered a future champion in the Knockouts Division, but spent months playing the buddy role alongside friends like Allie and Rose Mary.

That all changed for The Girl on Fire recently, as she has been displaying a much more sadistic and chilly attitude. In the process, she also changed her trademark colors, shedding her fiery red for a blistering blue. It was her subtle – yet at the same time bold – way of making a statement.

But Hogan’s boldness doesn’t stop with her in-ring persona. And, her courage has nothing to do with with her attitude or attire. In a recent interview with TheGorillaPosition, the 24-year-old Atlanta native says she has a newfound confidence heading in to her third year with Impact, and her journey has taken her to a better place in life.

“It’s crazy to me,” Hogan said, as she was prepared for this weekend’s Impact TV Tapings at Sam’s Town Hotel in Las Vegas. “It doesn’t feel like it’s gone by so fast, and I can’t believe it’s going to be three years that I have been with the company already.”

Hogan, who wrestles much bigger than her 4’11” inch stature, is a mix of both power and quickness. When she burst on the scene in late 2017, she immediately captured the audience’s attention with her natural athletic ability. However, lately, it’s been her change in outlook (and in-ring tactics) that have been getting her noticed. After months of ‘waiting her turn’, it was time to switch things up.

“I think I went from being the girl that was just so happy and grateful to be here all the time, to this person who is so confident in what she does,” Hogan explained.  “And now, she just wants to go out there and prove that she’s the best.”

“In the back of my mind, I always knew what I was going to do. I knew I was going to go to the blue; I just needed a reason to do it. I didn’t want to do it for no reason. In the end, I’m still The Girl on Fire… I’m just the hottest flame now.”

The move has worked out well, as she’s been getting a lot more exposure in recent weeks. And although Hogan has been recently involved in a strange, ‘frenemies’ relationship with Madison Rayne, she says her ultimate goal is to eventually win the Knockouts Title.

“I’m hoping to be Knockouts Champion soon,” Hogan said. “That’s what I strive for. It’s what we all strive for. But, honestly? I’ve never really been given that opportunity yet. I haven’t had the same chances some of the other Knockouts have had.”

“So… I just hope someone gives me that chance. I hope whoever the Knockouts champion is when that time comes, they’re not too afraid of the Little Blue Flame.”

And while Hogan continues to takes steps to grab the gold professionally, she’s already found the ultimate success in her personal life.

In July, she drew mainstream media attention when she made the decision to reveal her relationship with fellow wrestler Diamante to the website, Out Sports. Kiera says that she had spent years struggling with her own sexual identity. But, once she found the right person for her, she no longer wanted to keep that part of her life a secret.

“It was something that made me happy personally, and I wanted to share it with people,” Hogan said. “I was finally in a place, where I decided to just be myself, and be 100% true. I just wanted everybody to know me for me, and who I really am. (Diamante) really gives me the confidence now to be happy with my true self. It’s amazing.”

That’s not to say there wasn’t some initial apprehension on the couple’s part. They knew they could potentially face harsh scrutiny or tasteless jokes from not just fans, but possibly even members of their own industry.

“Diamante was literally shaking, when we told everyone, because her phone started going off like crazy. But, it turned out to be so many of our friends, and people in the wrestling business, congratulating us and really showing their support for us.”

Hogan says the response since has continued to be amazingly positive. And, when Impact heads to Chicago for Bound for Glory on October 20th, she will take part in some very special events. She’ll drop the puck at the Chicago Wolves hockey team’s first-ever Pride Night, as well as deliver a speech the next day at the LGBTQ center in Chicago.

“I hope I’m able to use this as a platform to be an advocate for the LGBTQ community.” Hogan said. “I’m so excited to be able to talk to everyone – especially the younger people. I never thought I would be in this place, and have the chance to make a difference.”

Hogan’s advice for someone making a similar decision to come out is a fairly sensible approach: It’s all about being true to oneself.

“At the end of the day, it’s your truth.” she commented. “You have to be happy with yourself. It’s your decision, and not one based on anyone else, or, what anyone else thinks of you.”

“You shouldn’t regret anything in life. And I can tell you: I regretted it for a long time… not being able to talk about it. Because I was scared.”

She says that finding her own truth helped lift an incredible weight off her shoulders.

“I feel so much more confident about life, and relieved. I feel like a breath of fresh air has come over me. So, I just want anybody to understand… at the end of the day, it’s about your happiness. Your genuine happiness.”

Hogan, who recently re-signed with Impact, says she’s not only thankful to the promotion forgiving her a chance to be a wrestler, but to also have a voice in the community.

“My fellow Knockouts – my sisters – were there for me when I made the announcement. They were there to help me and give me support,” she said. “And everyone from Impact just gave me an outpouring of love, whether it was at work or on the internet. It was all positive and supportive, and they all made it easier for me to talk about it. That really showed me how much they cared.

“It feels like I have come such a long way. In my life. With this company. In everything. At the same time, I know that I still have a long way to go. But, I feel like being with Impact has been the best experience it could possibly be for me. And, I’m so thankful for that.” 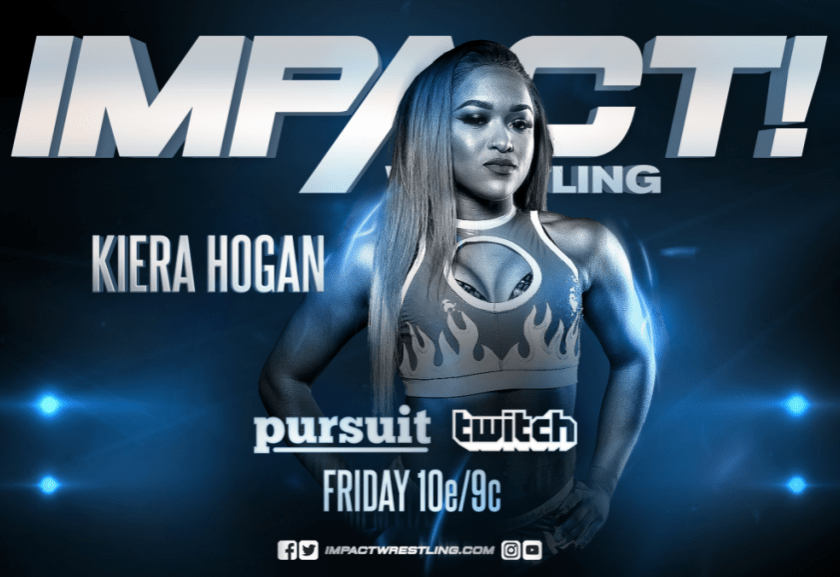