By The Unemployed Booker, Staff Writer

One of my journalistic heroes, William Lloyd Garrison, once wrote, “The apathy of the people is enough to make every statue leap from its pedestal and hasten the resurrection of the dead.” If taken in the context in which he wrote it, the great liberator is saying that when somebody loses their desire, it makes even a statue want to leap up and force the situation to change. Mr. Garrison was talking about ending slavery, but we are going to build a fire big enough that all the fans of the WWE are going to want to leap from their seats and hasten the resurrection of Bayley. 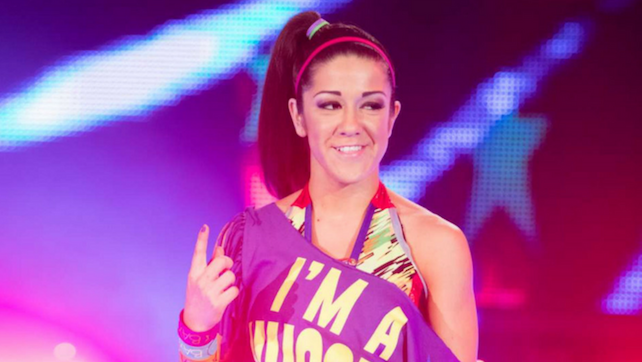 The Seeds Are Already Planted
At Payback, Bayley heartbreakingly lost her title in her hometown. A cheating Alexa Bliss got the victory after a hard-fought match by Bayley. With her family at ringside, her nephews crying, and huge disappointment on her face, it was the perfect beginning to her fall from grace. Bliss did a good job on RAW of cutting into Bayley. Then, Bayley showed a little bit of a different side of herself as she let anger take over the positive hugger attitude and jumped on Alexa. After that, during the match, once again Bayley looked like she had a win, but a cheap shot by Alexa gave Bayley another loss. This planted the seeds for Bayley to begin to lose her positive thoughts. It began the fall of Bayley.
The Descent
We know WWE will allow Bayley a rematch going forward. I would hold that off until the next PPV, but up until then I’d continue to have Bayley lose in tag matches or even a singles match against Nia. These losses should be all basically the same M.O.: Bayley looks like she has a win, but then something happens, and she loses, yet again, in heart-breaking fashion.
Once we get to her rematch, you can see Bayley’s attitude start to change. She still does her usual entrance, but you can tell she does it almost begrudgingly. The match once again plays out in similar fashion. Bayley looks like she’s going to win the championship back but Alexa cheats once again and gets the win. Bayley, looking heartbroken, walks out of the ring and doesn’t acknowledge any of the fans.
After the match with Alexa, Kurt Angle has to decide on a new #1 contender. He decides to book a match on RAW for the right to face Alexa. All the women are in the match except Bayley. Kurt tells her that since she’s lost so many matches and just lost to Alexa, she has to build herself back up to earn the right to contend for championships. Bayley, again looking dejected, accepts her fate.
The next week on RAW Bayley is in a match with Nia Jax. Bayley comes out looking like she’s had the worst week of her life. The match goes completely Nia’s way and Bayley gets destroyed. Her attitude is now completely soured. She is in full depression and has no heart or desire to wrestle.
The Rise of The Phoenix
This depressed Bayley continues on each week while her best friend, Sasha, who has now become obviously estranged from Bayley and her depression, wins the title. Bayley continues to come out depressed for weeks. Her losing streak continues. The commentators sell hard on Bayley’s attitude. Others try to cheer her up but it’s to no avail. Bayley continues to lose and sinks deeper into her depression.
As we get to the build up to SummerSlam, Kurt Angle starts making matches to help determine a #1 contender. Bayley is still left out based on her losing streak. Emma wins the right to be number one, but Sasha reminds Kurt he never gave Bayley a chance. She tells him that she refuses to wrestle until Bayley has her shot at the spot. So the week before SummerSlam, Kurt sends the depressed Bayley out, against her will, to wrestle Emma for a chance to face Sasha at SummerSlam.
Bayley, still refusing to do her normal entrance, heads to the ring. This time, she’s so unenthused to be there she unplugs her inflatables. On her way to the ring a fan grabs her arm and Bayley spins around in disgust. They make eye contact and Bayley realizes it’s her #1 fan Izzy! After a few seconds of looking at each other, Bayley grabs Izzy for a hug. After this, Bayley’s demeanor changes. She hits the ring and makes fairly short work of Emma who looked unprepared for an excited Bayley. After the match, Bayley celebrates with Izzy and plugs her inflatables back in. The old Bayley is back and ready for SummerSlam.
In a face vs. face contest, Sasha and Bayley give us a great match, just like their NXT match at the same Barclays Center. With Izzy looking on from ringside, Bayley and Sasha go back and forth, several big spots and kick outs, until, finally, Sasha hits the Bank Statement for the win. As soon as Bayley recovers they embrace and Bayley, not looking upset this time, raises the hand of Sasha.
The Aftermath
Bayley goes on to be Sasha’s friend and talks about how she doesn’t need the championship to feel validated. She supports Sasha in all her matches and they have several tag matches along the way. You can then have Dana begin to bully Bayley and then do a story line about standing up to bullies. Eventually you put the title on Nia Jax and have Bayley take up for Sasha and chase the title from Nia. Once she wins it, it opens the door for Saasha to not support Bayley like Bayley had her when Sasha was champ. Then Sasha turns full heel on Bayley and sets them up for another long-running feud.
One of the timeless story arcs in wrestling has been to build sympathy for a character until they can overcome the odds and make it back to the top of the sport. The great thing about this storyline is it is very beneficial when you want to move a superstar down the card for a period of time while you let others play in the main event scene. Using the depression and then bullying storylines gives WWE a chance to address a hot topic in the news lately. It can also lead to good PR has they can use Bayley in their anti-bullying campaign. It would be a big win for Bayley’s character and for the WWE, but what do I know.