It’s no secret the that the Revival is not happy on Raw, or with creative and the lack of TV time for tag teams.

They recently asked for their release, along with Maria and Mike Bennett. Maria has tried to take to social media to say she did nothing of the sort – (and subsequently, was called out by other wrestlers for lying.) 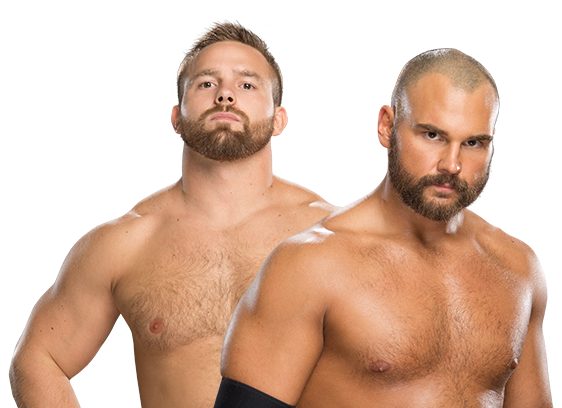 Dash Wilder and Scott Dawson, on the other hand, have been vocal on social media. one changed his Twitter handle to his real name to get someone, anyone’s attention. But it this a good tactic? Time to break this down.

Let’s get something straight here, the news of All Elite Wrestling coming to light has sparked a lot of talk in the wrestling industry. From the wrestlers, to the fans, to independent promoters – this is a big deal. It provided options for wrestlers that otherwise might not have a lot of options. It brings competition to what most people see as a one-horse race.

(Sorry Impact, no matter how much you try, people just can’t admit how strong you could be, because of certain uncertainties.)

The Revival had a match with Lucha House Party on Monday Night RAW; They win, get backstage, and immediately ask for their release. Wait, what? You just got over on TV. They got a much needed win under their belts, since it seems like they have been the perennial sloppy seconds in all of their recent matches with Roode and Gable and the Lucha Party. So what gives here?

Dash and Dawson aren’t happy with the way creative books the Tag Teams, or how much time the they get on Raw TV. Now don’t get me wrong here, the Revival in NXT was amazing. Old School wrestlers that took the NXT Tag Team division by storm. Winning the NXT titles on two separate occasions. Their matches with DIY got some much attention they got match of the year nods and feud of the year recognition. It begs the question what exactly went wrong here? 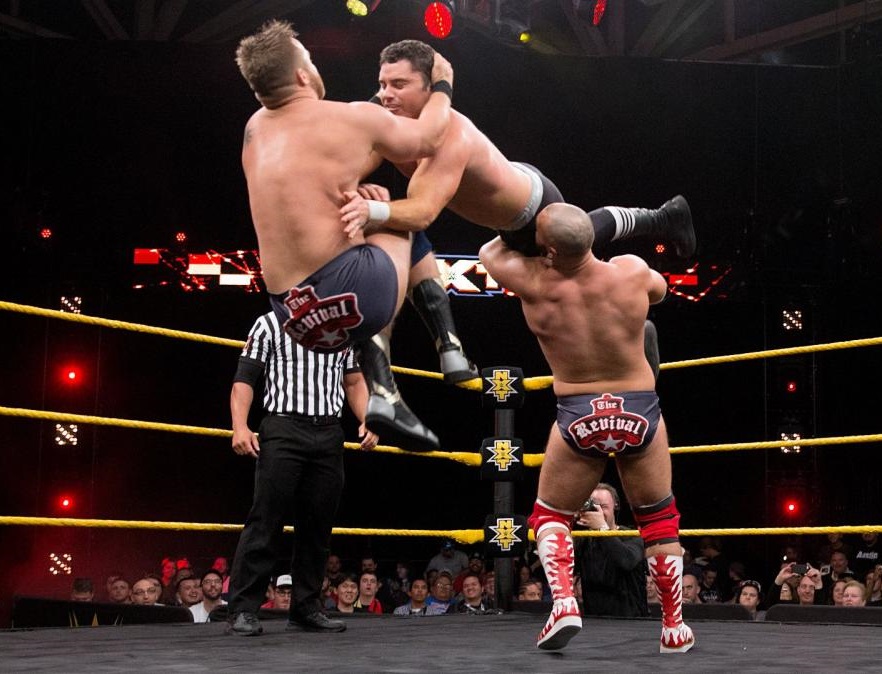 Triple H and NXT knew how to use them and get the best out of them. For whatever reasons this is not translating to the teams or wrestlers in general when they hit the main rosters. AOP and American Alpha are prime example of this. But not to stray off topic, this is about the Revival Dash and Dawson. Creative had plans for these two from the beginning, but untimely injuries cut any potential pushes short.

Then they are coming back and get the hidden background storyline with who attacked Enzo which amounted to Nothing. Then another injury. Enzo and Cass split, Enzo and Cass get released or fired and the Revival go back to the drawing board again. In hockey this would be called No Puck Luck. In wrestling especially in the WWE this is called missed opportunities because of ill-timed injuries and stupidity (Talking about Enzo and Cass).

They get healthy and can’t beat thrown together teams like Dallas and Hennig, or Gable and Roode. Any combination of the Lucha Party for that matter. In essence, they became another glorified tag team that is just there to job. They say they are wrestling historians big fans are Arn and Tully, then they should know the teams I’m going to list below in a second to make a point. In NXT they might have been the Brain the Busters. But in the WWE and on Raw they are becoming Cryme Tyme.

To my next point.

Now, for all the history the Revival spew at times, they should know this history and it might be that they feel like they are the next Beverly Brothers, Orient Express, Furnas and LaFon, Killer Bees, teams that were good, but never won the belts, and now they want out, before they go from Forever the Revival to Forget the Revival. But are they going about this the right way? 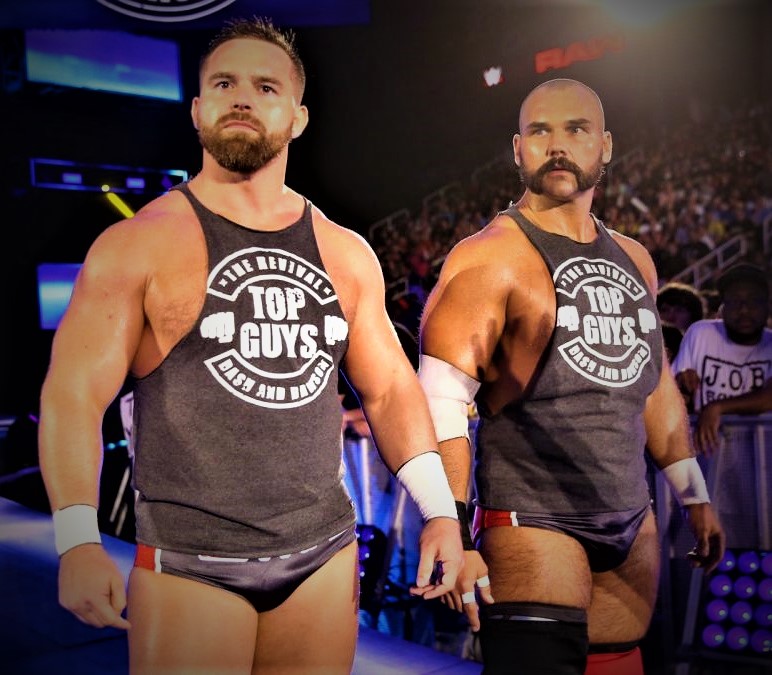 Not to beat a dead horse, but the injuries mentioned earlier cut into pushes, like it or not.

If another team smells blood in the water, they are going for the kill. For those that don’t know history, that’s how Road Dogg and Billy Gunn got moving and never stopped. A duo thrown together and when another team faltered, the New Age Outlaws got the call, and it resulted in six championship runs for the duo. And for a time, arguably the most popular tag team of the Attitude Era.

It’s not their fault that other teams didn’t jump in and grab the opportunity. And, the Revival also shouldn’t take it to heart that they are being made to ascend the ladder. The gold pot at the end of the rainbow in the WWE isn’t just handed to someone. Ask Drew McIntyre how it went for him.

Also to the Revival.., you are no Young Bucks. Like it or not, no tag team in the WWE gets 20 minute matches a night. No tag team is standing above the rest because Vince likes throwing together teams, and letting them run with gold. The Revivial also aren’t looked at by Vince as a draw. That might be a harsh assessment and not a popular one, but when was the last time a Tag Team main event headlined a Pay Per View in the WWE? Shawn Michaels and Triple H as the original DX vs Kane and the Undertaker as over the hill Brothers of Destruction. That isn’t saying much here people. And it’s thrown together tag team, not a molded duo that tags all the time.

Look at the Usos. Here is a team that went what 6 years without a Tag Team match at Wrestlemania because of injuries yet are one of the most popular and pushed Teams on either show? The Bar is another classic example of two wrestlers not vying for any singles gold, they get thrown together and are now 5 time tag team champs. The New Day…okay they are in dire need of a break up or heel turn, but again a team that is constantly pushed and finds TV because of mic work. I haven’t seen a lot of mic work out of the Revival, so maybe asking for a release will result in some. Maybe take a page out of the CM Punk book and drop a pipe bomb? 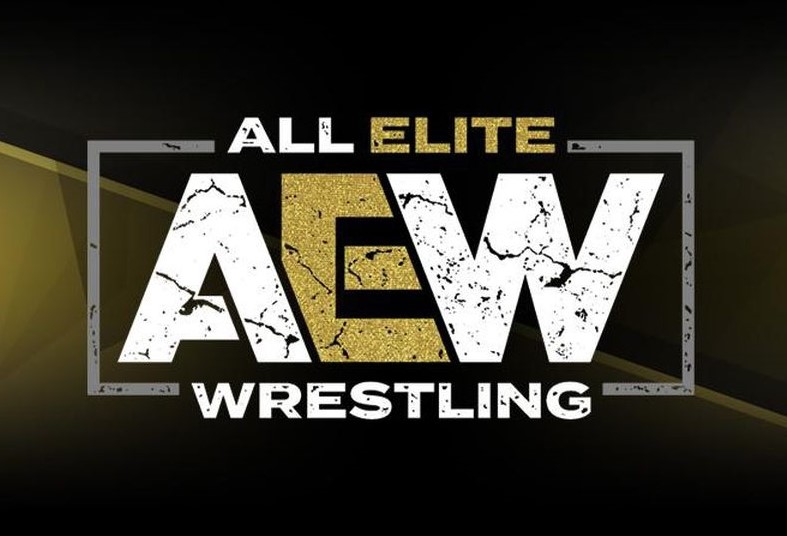 Going back to the original question, are they going about this the right way? No. With AEW coming out strong, Vince McMahon and Company are not going to release teams or wrestlers that have years left on their contracts to allow another company to pick them up. If anything all they are doing is becoming an after thoughts or needed jobbers when someone else needs a push.

Are they mishandled? Yes. Are they in the right complaining? I’d have to say yes to that too. But the problem with complaining in the WWE is Vince will only listen to a handful of people and Neither Dash or Dawson are high on the list of people that Vince will probably listen to. So before you lose what little push you have guys a bit of advice.

Become the Revival you were in NXT. Go out there and do your thing to the best of your abilities and give the crowd something to cheer or jeer about. Take advantage of your TV time because if you are serious about leaving then you have a year plus of time to auditioning on TV for Impact, AEW, ROH or NJPW. But keep your mouths shut because the more vocal you are about it the less people might be willing to deal with you. Use Social Media to start feuds with other teams. The cleaner you keep it the better. Don’t give Vince a reason to blacklist or blackball you.

There is no reason to Forget the Revival, but with antics that were just played, those that supported you in NXT might not want to Forgive the Revival. And Vince might just put you in a spot where he F***’s the Revival. Just food for thought before you request a release when you have a contract.

So, if you want to be “Forever the Revival”, do your jobs… and don’t play the political games. No one wins in wrestling with that.

Especially those on the bad side of the McMahons.