With every new year, the WWE announces its Hall of Fame members right before WrestleMania – even though we still haven’t seen the inside of the hallow halls like Canton or Cooperstown. Vince has people he wants in, he has people that we may never see go in. The bottom line is, as cool of a concept as the WWE Hall of Fame Vince and family are going to pick who they want, when they want regardless of what the fans think or want.

I mean look at this realistically for one minute. Did anyone think Jeff Jarrett would be inducted after he held the company hostage before dropping the IC title to Chyna? Were you shocked that the Ultimate Warrior was inducted after he pissed off an entire locker room before dropping his belt for more money to Sgt. Slaughter? There is always going to be controversial people that get inducted into any sports or entertainment Hall of Fame.

Torrie Wilson is getting inducted. Whether you like it or not she had an impact on the way women were and are looked at in wrestling. In WCW she was part of the Filthy Animals, seduced David Flair into turning on his dad Ric Flair, she was part of the New Blood angle, name it. They used her beauty in a way that led to matches for Billy Kidman, David Flair and others. When she was released by WCW she went to the WWF as part of the Invasion Angle.

In the WWE she was in one of the weirdest and most ridiculously bad storylines with Dawn Marie and her “dad” Al Wilson. Ridiculous, but still talked about. And Vince loves it when controversy turns into chatter and turns into ratings, which Wilson and Dawn Marie were generating. Torrie was also a Playboy model for the WWF. She even teamed with Sable as the Cover Girls in a feud with Jackie Moore and Stacy Keibler.

No, Torrie never won a WWE title – but neither did Koko B Ware or the Junkyard Dog and they are both WWE Hall of Famers so that argument doesn’t hold water with me. People are claiming other women are more deserving like Molly Holly and Victoria. I agree, but there is plenty of time to get them inducted into the Hall of Fame too. The argument just has no legs to stand on right now. Torrie Wilson did a lot for wrestling and deserves her nod as much as the next person. 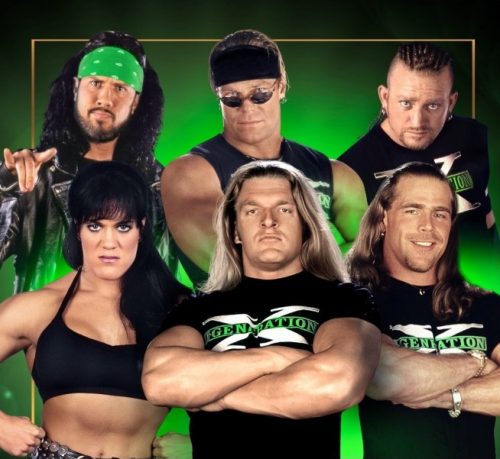 DX is going in and Chyna is part of the group that will be inducted. People are claiming she should go in alone, or she doesn’t deserve to go in. I disagree with those that believe in these assessments. Chyna does deserve to go in with DX. What does it matter if she does go in solo act or not? She is getting in! Isn’t that the bottom line for a WWE wrestler whether male or female? Getting into the Hall of Fame regardless of how you got in?

Chyna was the big muscle for DX when they started as just HHH and HBK. At the time it was unheard of that a female valet A) looked like Chyna and B) dominated the men like Chyna did. When they extended the group as Michaels left because of injuries, X Pac, Road Dogg, and Bad Ass Billy Gunn, still had Chyna doing a lot of their dirty work. She mixed it up with the best and worst of them and was dominating to the point DX held almost all the titles under Chyna’s watch.

Here’s where we get to the land of the murky and mucky waters with both Wilson and Chyna and men in general.

What completely irked me about reading some of the comments on Chyna and Torrie is the men bitching about these women getting in and having outside affairs or relationship issues. If you think these two women are the only ones that have done things like this in the wrestling industry you are smoking something and aren’t sharing with the rest of us. After all, it takes two to tango.

Remember part of Chyna’s issues were the fact that Triple H left her for the boss’ daughter. We are okay with this as a storyline, but not in real life? I get there is always people speculating on what happened, how it happened, why it happened, with Triple H and Chyna. The bottom line is the mental damage this might have caused one side almost always goes unnoticed. But Triple H is going in too unharmed.

Torrie was married to Billy Kidman and was cheating on him with Mitch of the Spirit Squad. They had a business partnership that led to something outside of the ring. Too much happened outside of the ring and Kidman and Wilson eventually divorced. Not exactly morally ethical, but wrestling isn’t exactly a moral business at times, like it or not.

Hell, if the WWE had any kind of conscious outside of erasing Chris Benoit out of all their historical material, they would also remove an accused murderer out of their Hall of Fame in Jimmy Snuka right? Jake the Snake, Scott Hall, Kurt Angle all have some checkered things that happened in the past, but we overlook these things because…why again? What about Edge and Lita? Both Hall of Famers. Both had some poor decision-making skills while being on the road. Both benefited from the angle it led to.

I know people might not like this, but Torrie and Chyna did contribute to the WWE more than others would like the admit. If the WWE overlooks other male wrestler’s personal issues, then they need to do the same with the women. Are there better options to go in? Maybe, but this is a Hall of Fame without a home to admire or question the inductee’s whichever suites your fancy.

People that are mad shouldn’t be mad about who’s going in. They should be mad that the WWE still doesn’t have a home to showoff what they call the best of their wrestling world. Not what their wrestler lack in moral ethics out of the ring. That’s just my two cents though.