In honor of all those WWE employees that lost their jobs Wednesday 4/15/2020 I write this column.

It absolutely makes me sick that Florida thinks the WWE is an essential business. Essential to what? We have doctors, nurses, firemen and women, police men and women, health care workers, warehouse workers shipping out supplies, along with grocery store employees on the front line of an unknown battle losing and risking their lives daily due to this epidemic and the WWE is essential? What a load of crap.

Follow the damn money to see this big charade and you’ll see how this happened. The Dipshit Governor of Florida who lacks testicular fortitude to the Super Pac donor to the Owner of the WWE and you have yet another scandal. Yet here’s the moron owner of the WWE that just declared bankruptcy for a second time with a football league that he knew was going to fail going head to head against a juggernaut like the NFL. Follow the money.

But let’s name him a leader to show others sports how to jump start the economy. No matter how it impacts others or whose lives are at risk. By the way, Vince hates it when you call wrestling a sport, so why put him in charge? Follow the money.

If you sit there and defend the WWE, look in the mirror long and hard. Empty arena shows are tanking faster than the Atlanta Falcons blowing a 25-point lead in the Super Bowl. No one is intrigued with wrestling right now. The ratings have been on a steady slide because of over saturation and plain assed shitty storylines. Don’t believe me? AEW lost to NXT this Wednesday night after the WWE’s Wednesday Massacre of talent and employees. Follow the money. 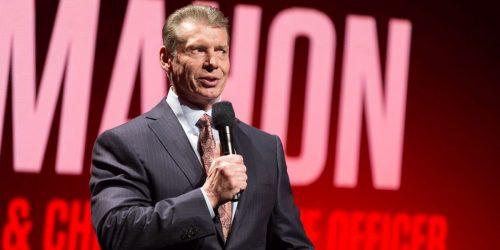 Don’t like the term massacre, stop reading because it was a massacre. Here’s a company that several people question because of their adoration of accepting blood money from the Saudi’s. Overpaying for part time talent that does little to nothing to help the younger talent and the product. Here’s a company that ignores people’s health in the sake of acting like they are being patriotic putting on a show that is about as entertaining as watching an electronic spider getting squashed by the champ, which is not entertaining at all after a 5 month build. Follow the money.

The WWE is a company that claimed to be a leader in the industry that entertains fans, it hit the panic button so hard, hundreds of people lost their jobs. Essentially letting essential workers go means the business is not needed aka not essential! It’s a farce. Can anyone from Florida explain why the WWE is essential with a straight face? I highly doubt it. Follow the money.

Does this sound like a company that deserves to be consider essential? If they were an essential business then why would they have to release and furlough essential workers? You can’t answer that either because wrestling isn’t an essential business one God Damn bit! It’s a form of entertainment and athletics, that give people a moment to escape from their real lives. Right now, even the talent needs that break since we are dealing with an epidemic and not a terrorist attack. Just traveling they are putting themselves at risk. Follow the money.

Linda McMahon who we haven’t seen in ages on a WWE program donates a couple million dollars to 45 and the same day her husband’s business is considered essential. See why I said follow the money. I mean it isn’t underneath the McMahon’s to buy their way out of trouble. Look at “Dark Side of the Ring” again and tell me how the police in the Jimmy Snuka murder case lost evidence after having a meeting with McMahon and Snuka and then let the case sit for years without even attempting to find out what happened. Go into a room with a briefcase walk out with nothing. Sounds funny if you follow the money.

I go back to this question: If the WWE is an essential business then why release the talent they did? Hoarding talent from AEW, Impact, ROH, NWA, NJPW, and other promotions for months to keep themselves looking stronger and then doing this during one of the hardest times in our world’s history, firing people is the answer for billionaire Vince? 20 million dollars keeps at least 40-50 percent of the talent they just released. But instead its going into a re-election campaign to trick people into thinking the WWE is essential. Shady as shit isn’t it? Follow the money.

This might be the big hit for the WWE. All the wrestlers out there that want to be WWE superstars might second guess if that is the best move considering how they have handled this and how they operate in general. If AEW, Impact, ROH NWA or the other wrestling promotions around the world sit this out and are able to resume business without issues after the coronavirus passes it will give wrestlers that were effected by this better options to think twice about getting ramrodded by the WWE and Vince McMahon. Follow the money.

Watching all the talent tweet out thanks, post heartfelt Instagram messages/videos, and show their gratitude to the fans was enlighten and heartbreaking. Good, hard working, every day people lost their jobs all because Vince McMahon claims Fox and USA contracts hold him to a specific amount of live events. Follow the money.

You’re tell me USA and Fox execs aren’t paying attention to the world to hold that contract to its word and not put safety first? I call bullshit, well maybe not with Fox since they are also up 45’s orange ass. But, considering all network shows are on hiatus until this situation with COVID-19 passes who knows what Fox and USA are thinking. Then again Vince might be using this as an excuse for fans to be mad the networks and not him. Follow the money.

To those defending Vince McMahon, up yours. He’s not a leader. He’s not above the law. He’s an egomaniacal asshat that devastated the wrestling community, friends, families, and fans by showing just how far he will go to line his own pockets at the risk of his own talent. This douche monger deserves nothing but the scorn thrown his way by people that understand the situation. Follow the money.

For all those released, the fans feel for you. We appreciate you giving your bodies, minds, time and talent to us all for the sake of entertaining us. Die hard fans know you will land on your feet again and we will be there to support you every step of the way. EC3, Drake Maverick, Anderson, Gallows, Ryder, Hawkins, Logan, Purrazzo, Helms, Angle, Storm, Rusev, Young, Rush, Slater, English, Chioda, Colon’s, Kanellis’, Rowan, No Way Jose, Finlay, Kidman, Steel, Deebs and others. Follow the cheers.

The only thing essential about the WWE and McMahon’s is they seem to be essential con artists. That’s good because I still don’t think WWE is essential to fans right now. If they were the ratings wouldn’t suck. Thus, ends this pipe bomb. Follow the truth.