On November 21st, 2007, Harrison Norris, Jr., who had appeared regularly for World Championship Wrestling as ‘Hardbody Harrison’, was found guilty of sex trafficking and prostitution charges by a federal jury in Georgia. 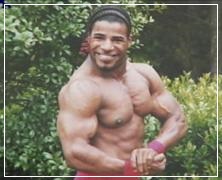 Known mostly for his physique and strange ring attire, Hardbody Harrison never moved above the preliminary level, regularly losing to more established stars on WCW Monday Nitro. Prior to getting involved in professional wrestling, Norris had served in the United States Army overseas during both Operation Desert Shield and Operation Desert Storm. He then trained at the WCW Power Plant and debuted with World Championship Wrestling in 1995.

In 2001, Harrison’s contract was not picked up, after the company was purchased by Vince McMahon and the WWF. He subsequently retired from professional wrestling.

Upon stepping away from the ring, he was a party to a multi-plaintiff lawsuit filed by Sonny Onoo on behalf of WCW talents against former employer, AOL Time Warner, charging the conglomerate with racial discrimination. The suit would be settled out of court for which all the performers, including Harrison, reportedly received a healthy financial settlement.

Then, somewhere along the way, something went wrong for the former wrestler, bodybuilder and fighter. Local and federal authorities discovered that Harrison had been living with several females in a Georgia home as part of a prostitution ring.  And most – or possibly all – of the women were being held against their will.

From the Associated Press:

ATLANTA (AP) A federal jury on Wednesday convicted a former pro wrestler known as “Hardbody Harrison” of charges that he kept eight women as sex slaves in his two north Georgia homes.

Harrison Norris Jr. was convicted of charges including aggravated sexual abuse, forced labor, sex trafficking, conspiracy and witness tampering. He was acquitted of all charges involving a ninth woman, but still could get life in prison at sentencing, set for Feb. 28.

Norris, 41, wrestled for the now-defunct World Championship Wrestling organization in the 1990s.

Serving as his own lawyer, he contended that the women willingly lived at his Cartersville homes because they wanted to train as pro wrestlers. He says many of them arrived on drugs and left in the best shape of their lives.

During a two-week trial, prosecutors portrayed Norris as a predator who used his wrestling business to lure poor and vulnerable women into prostitution and forced labor.

“I think the jury’s verdict vindicates the rights of the victims who were brave enough to come forward and confront this man who abused them,” prosecutor Susan Coppedge said.

Witnesses testified that Norris, a former Army sergeant and veteran of the Persian Gulf War, imposed a strict military structure, with each of the women assigned to a squad overseen by an “enforcer.”

One witness testified that Norris beat or threatened them to keep control and that he threatened to throw one through a hotel window when she would not engage in sex with two customers.

In addition to forcing the victims to work as prostitutes, Norris made them work in and around his houses, requiring them to haul trees, lay sod and paint, according to testimony.

During the trial, Harrison chose to serve as his own attorney, asserting that he was training the women as professional wrestlers, and that he had helped them quit drugs. Witnesses for the prosecution contended that Harrison used psychological intimidation, physical abuse, and supposed “debt” the women had incurred, to gain control over them. Stories of forced group sex and an environment of servitude would be part of the testimony that helped ensure a guilty verdict.

Based upon the multiple convictions, Harrison Norris, Jr., aka Hardbody Harrison, was sentenced to life in prison. He will be given no chance for parole.