Welcome to the fifth installment of The Great PPVs – whether you’re reading this at Enuffa.com or TheGorillaPosition.com, I hope you’re ready for a little trip down Memory Lane. 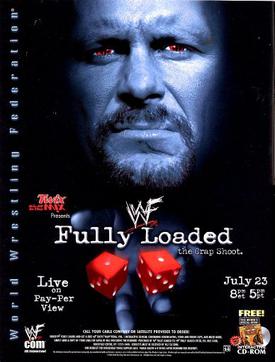 Today I’m taking a look at what I consider the best PPV from one of (if not THE) greatest years in WWF/E history, the year 2000. 2000 was, from a profitability and creative standpoint, the apex of the WWF Attitude Era. After the late 1999 departure of Vince Russo and Ed Ferrara, whose “Crash TV” style of booking had become stale and nonsensical, the following year saw a return to a more focused product with a much greater emphasis on the in-ring aspect. Imported WCWers like Chris Jericho, Chris Benoit and Eddie Guerrero certainly helped, as the upper midcard now boasted some of the most talented grapplers in the world. Additionally the tag team division flourished that year, thanks to breakout performances of Edge & Christian (who’d finally found a winning gimmick with their dorky metal-head schtick), the Hardy Boyz and the Dudley Boyz. Between the aforementioned rising stars and the already established names, the WWF’s 2000 roster was one of the best ever assembled.

One interesting thing about the company’s PPV calendar that year was that the Big Five PPVs, with the exception of the Royal Rumble, vastly under-delivered, mostly due to the shows being overcrowded and sloppily booked. But the B-PPVs that year were almost all incredible, with stellar main events and stacked undercards that effectively utilized the thriving locker room. Fully Loaded is one such example of a PPV with both excellent top-billed bouts and strong supporting ones. The subtext going into Fully Loaded was that the existing WWF main eventers (The Rock, Triple H and The Undertaker) were all being challenged for their spots by the new guard (namely Chris Benoit, Chris Jericho and Kurt Angle). The show was billed as a Triple Main Event (though Double is really more accurate), and while the glass ceiling was by no means shattered here, it was perhaps cracked just a little. And two of the three big matches delivered huge.

But first the undercard: The show opened with a wildly competitive mixed six-person tag match, as The Hardyz and Lita faced Test, Albert (T&A, get it?) and Trish Stratus. This tag team feud didn’t exactly light up the airwaves, but most of the intrigue here was between the WWF’s two “It-Girls,” Trish and Lita, who would feud on and off for the next six years and serve as the backbone of this new and exciting Women’s division. This was a highly entertaining opener, which Team Extreme won after a climactic exchange between the women, culminating in Lita’s top-rope moonsault on Trish.

Next was a throwaway meant to showcase the former ECW Champion Taz(z) against another ECW alum Al Snow. This match was brief and mostly dominated by Taz(z), who finished Snow with his Tazzmission (a Cobra Clutch variant). This would sadly be the last time Taz(z) was well-used in the WWF, as he began a pointless feud against Jerry Lawler that fall, and by early 2001 was relegated to being an underneath guy.

An enjoyable little European Title match was third, as former friends Eddie Guerrero and Perry Saturn clashed. The two had of course been members of the Radicalz stable but began to splinter off only months later. Eddie and Chyna became an onscreen couple, while Perry took on Terri Runnels as his valet. Both women got involved here, and a groin shot from Terri on Eddie led to a top-rope elbow from Saturn to capture the belt. Nothing incredible here but this was a serviceable undercard match.

Another overly brief match was next, as Edge & Christian defended the Tag Titles against The APA. Christian had claimed he was unable to wrestle due to food poisoning, but that was later revealed to be a lie, and the match went on as planned. After only five minutes of domination by APA, Edge & Christian got themselves disqualified to retain the belts. This would be the last throwaway match on the show.

The unexpected hit of the night was an Intercontinental Title Steel Cage match between Val Venis and Rikishi. The two had begun feuding the previous month, with Venis (who’d captured the belt form Rikishi three weeks earlier) having been repackaged as a more straightforward heel character, managed by Trish Stratus. The match was a gritty back-and-forth affair, with Venis hitting his top rope Money Shot splash, and Rikishi hitting a gigantic splash of his own from the top of the cage that left both men incapacitated. Rikishi was close to escaping the cage, but Taz(z) attacked him, allowing Venis to score the pinfall and retain. This match is mostly remembered for Rikishi’s death-defying dive off the cage, but as a full undercard bout this was good stuff.

The “triple main event” kicked off with a very disappointing Undertaker-Kurt Angle match that honestly made Angle look like a chump. I’m not sure why the company, given that Angle had just won the King of the Ring tournament and was being groomed for a WWF Title run that fall, booked Taker to completely dominate this match (even stopping his own pin attempts to administer more punishment, a true dick move). But Taker controlled the bulk of it, putting Angle away in under eight minutes. Pretty shabby treatment of a future Hall of Famer, but Angle got his win back at Survivor Series, in a successful WWF Title defense.

Fortunately the next two matches more than made up for any of this card’s shortcomings, serving as an epic one-two punch where the company’s two best newcomers took its two biggest stars to the limit. 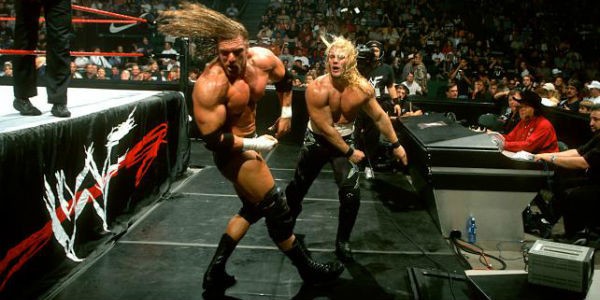 Triple H and Chris Jericho had been feuding for weeks, partly stemming from a RAW match that April where Jericho actually defeated Hunter for the WWF Title but due to a fast count the result was scrubbed from the record books. Jericho’s infamous ongoing feud with Stephanie McMahon ignited at King of the Ring, when Jericho kissed her during his first-round match with Kurt Angle, enraging both Steph and Hunter. A series of back and forth attacks on RAW led to this Last Man Standing match being booked. Triple H had proven himself a legit tough guy six months earlier in a Street Fight with Cactus Jack, but this match was Jericho’s turn to show he was more than a high flier. The fight raged all over the ringside area and involved ring steps, TV monitors and Hunter’s sledgehammer. Jericho had Triple H all but beaten numerous times, but thanks to Stephanie’s interference the match continued. After exchanging shots with the sledge, Hunter finally suplexed Jericho through the announce table and managed to get to his feet at the 9-count while Jericho remained unconscious, giving Triple H a very hard-fought win. Jericho may have lost here but he earned more than a few stripes for gutting out such a brutal match and nearly outlasting “The Game.” In retrospect a Jericho win here probably would’ve been the way to go, but the match is a classic regardless. 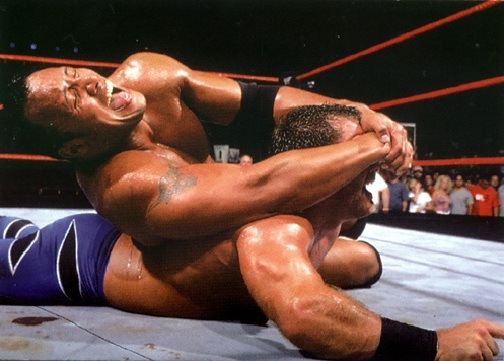 The main event outshined it in my opinion, however, as Chris Benoit challenged The Rock for the WWF Title in an excellent standard wrestling match (with a stipulation that the title could change hands on a disqualification). If Jericho proved his toughness in the previous bout, The Rock proved here he could keep up with Benoit’s technical wizardry, delivering one of his best pure wrestling performances. And Benoit proved he could deliver an excellent WWF PPV main event, elevating him to the status of “sometimes main eventer.” This fast-paced match came to a false finish after Shane McMahon knocked the referee out with a chair, and moments later the ref disqualified The Rock, thinking it was HE who’d used the weapon. Benoit and Shane celebrated momentarily but WWF Commissioner Mick Foley emerged and ordered the match restarted. After several more minutes of furious action, The Rock hit a Rock Bottom to retain the title, capping off a fantastic wrestling-heavy PPV at a time when the company was cruising on all cylinders.

This show certainly wasn’t perfect, nor was the overall product at the time, but Fully Loaded 2000 made great use of both established and new stars, helping elevate a few people even in losses. Perhaps greater risk-taking might’ve improved the show a bit (Triple H certainly wouldn’t have been hurt in losing to Jericho, and Angle should’ve been booked much stronger), but for my money this was the WWF’s best PPV of 2000, a year when the company was churning out good-to-great PPVs on a regular basis.