Welcome to the sixth edition of The Great PPVs, here at Enuffa.com and TheGorillaPosition.com! For those of you just joining us, this series takes a closer look at some of the all-time great wrestling shows while evaluating their place in history.

Today I’ll be talking about what is widely considered one of the best two or three WrestleManias of all time, WrestleMania X-Seven (Yeah, that name still comes off as goofy and I’m not sure what’s wrong with the number 17, or XVII, but whatever). Emanating from the Reliant Astrodome in Houston, TX on April 1st, 2001, the seventeenth annual WrestleMania is generally accepted as the climax of the wildly successful Attitude Era, when the company showcased all the big stars they’d spent the last four years building, plus an influx of new talent from either WCW or developmental. It was the perfect storm of new and established talent, and offered a wide variety of matches to enjoy. ‘Mania 17 was also the first edition in nine years to be held in a stadium, which added to its splendor, and it was the first in a decade to run a full four hours. 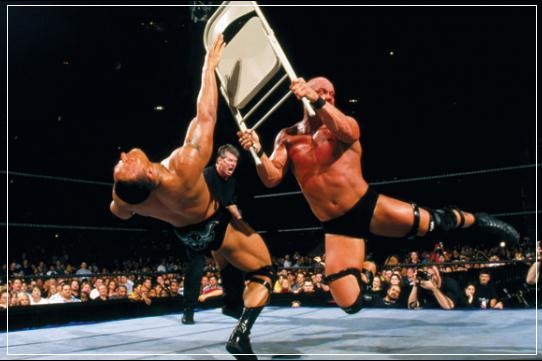 The show was built around the biggest rematch of the era, between the company’s two biggest stars. Two years earlier The Rock and Steve Austin delivered a chaotic main event that served as a perfect illustration of where the WWF was at the time. Vince Russo’s “crash TV” booking was in full force, and the PPV for better or worse reflected the short attention span philosophy of booking, with numerous week-to-week swerves, watered down hardcore wrestling, and an overly storyline-heavy product. Still the WrestleMania 15 main event was a very entertaining, if underwhelming match between the two mainstream superstars. Two years later Rock and Austin had the chance to truly tear the house down in front of a rabid Texas crowd, and this match met those expectations and then some. This brutal, bloody No DQ Title match ran 28 minutes, incorporated spots from other Austin matches, and ended with one of the biggest swerves in history, as Austin’s mortal enemy Vince McMahon helped him defeat The Rock for his fifth WWF Title. Austin had done the unthinkable and turned heel, joining Vince in a move that would drastically alter his onscreen persona.

Sadly this would also hurt the WWF’s bottom line, as their biggest star and merch seller was now far less appealing to casual viewers who had no desire to boo him. Getting the right audience response was an uphill battle that took several weeks and required Austin aligning himself with Triple H and beating up Jim Ross, the Hardy Boyz and Lita. Still, from a critical standpoint this heel run led to some of Austin’s best work, both in-ring and on the mic. The babyface anti-hero persona had become very stale by 2001 and after his heel turn it was quite evident that Steve Austin was having the time of his life antagonizing both the audience and his fellow wrestlers with his new “What?” gimmick, and exploring more comedic elements of his character. I personally always found Steve Austin effortlessly funny, and his 2001 Title run turned the volume way up on that aspect. Regardless, this match was an incredible main event; arguably the best ‘Mania headliner up to this point.

This was by no means a one-match PPV though, as the undercard featured numerous enjoyable bouts and a couple classics. 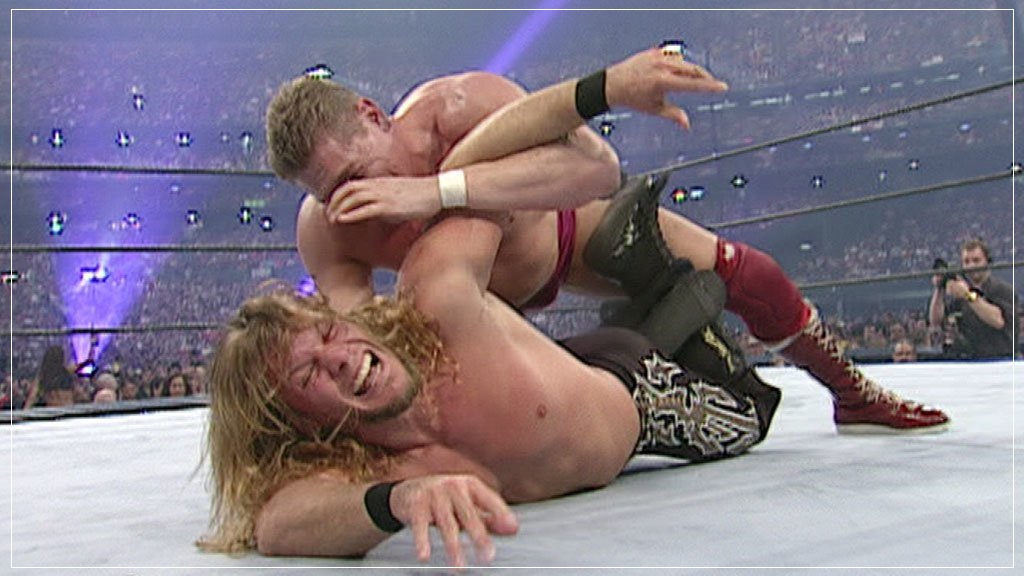 The show started off with a short but sweet Intercontinental Title match, as Chris Jericho defended against William Regal in a feud that pitted the cool-ass rock star against the stuffy English gentleman. Jericho won a seven-minute bout to retain. This match reminded me of some of the shorter ‘Mania opening matches of old, where it was simply a fun warmup for the crowd.

Next was a blazing four-minute six-man tag, with Tazz and the APA making short work of Right to Censor. There was nothing fancy here, but all six participants went all-out from the opening bell.

The first (and most unexpected) highlight of the night was a Triple Threat Hardcore Title match between Kane, Big Show and Raven, in a battle that was much more fun than it had any right to be. These three brawled into the backstage area, where Raven was thrown through a window, Kane and Big Show broke through a wall, and Raven and Kane each commandeered a golf cart before Kane dove off the entrance stage onto Big Show to win the belt. This here was WWF junkfood entertainment at its finest.

The European Title was next, as Test defended against Eddie Guerrero in another short match where Eddie enlisted the help of his Radicalz buddies Dean Malenko and Perry Saturn to recapture the gold. Nothing spectacular here but this was decent. 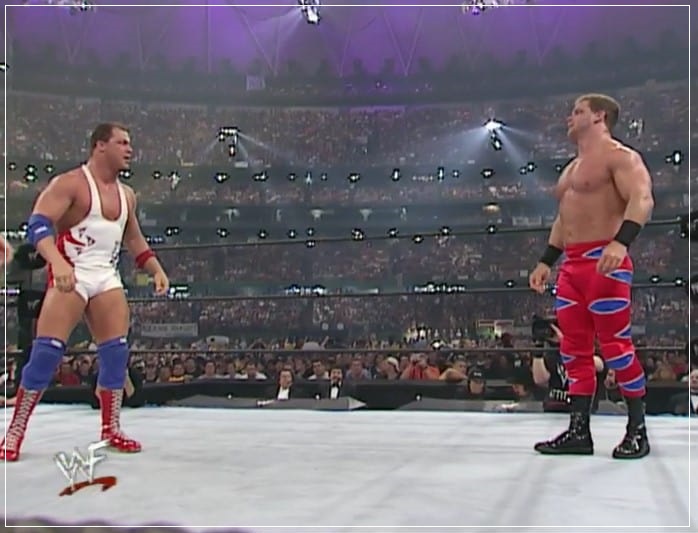 The first truly excellent match on the show pitted Kurt Angle and Chris Benoit, who began the bout with some brilliant amateur-style grappling that had the crowd on the edge of their seats. This purely athletic contest raged for several minutes before Angle got frustrated, nailing Benoit with a punch and tossing him out of the ring. From then it changed to a standard pro wrestling match, replete with suplexes and submission attempts. Benoit made Angle tap at one point but thanks to a ref bump there was no one there to see it, and Angle eventually got the quick win with a rollup. These two would feud on and off over the next two years, delivering multiple all-time classic bouts, but this was their first glorious chapter.

One of two weak points on this show was the Women’s Title match between Ivory and Chyna, a glorified squash that saw Chyna essentially no-sell her kayfabe neck injury and steamroll her way to her only Women’s Championship before her exit from the company two months later. Not much of interest going on here.

Next up was the pure sports-entertainment match of the night, as Vince and Shane McMahon beat the shit out of each other to resolve their long-running family drama, with Mick Foley serving as guest referee. Vince had recently demanded a divorce from Linda McMahon, sending her into a catatonic state, and had begun a creepy affair of sorts with Trish Stratus, who was also feuding with Stephanie (the two had a shockingly good match a month earlier). Midway through the match Trish, who had broken things off with Vince, wheeled Linda to ringside as a distraction, and slapped him in the face, prompting another brawl with Stephanie. Linda would then emerge from her trance and kick Vince in the groin, allowing Foley to attack Vince for hitting him with a chair earlier, and leading to Shane destroying him with a Van Terminator to win the match. This was pure McMahon nonsense but goddamn if it wasn’t a lot of fun. This really should’ve been the end of this family’s onscreen drama but sadly we’ve been treated to various remakes of this match and feud ad nauseum ever since.

In the eighth slot was a match that stole the show at two consecutive ‘Manias AND won Pro Wrestling Illustrated’s Match of the Year honors twice, the Tag Team Championship TLC match of The Dudley Boyz, the Hardy Boyz and Edge & Christian. Like the WrestleMania 2000 incarnation and its SummerSlam sequel, this match escalated car wreck stunts and violence to new levels, its participants putting their very lives on the line in the name of innovation. Interference by Lita and WWF newcomers Spike Dudley and Rhyno added a new wrinkle to this three-way feud, and when it was all over (easily half a dozen wrecked tables later) Edge & Christian had swept the trilogy, with this third installment being arguably the series apex.

The other lowlight of this show, harmless though it might’ve been, was the Gimmick Battle Royal, a throwaway match of nostalgia acts that served as a buffer between TLC and the two main events. Boasting a who’s who of marginal midcard acts and two former WWF Champions, the Gimmick Battle Royal was notable only for the announce booth returns of Bobby Heenan and Gene Okerlund. Aside from the joy of hearing Heenan’s color commentary again, this was totally skippable. Incidentally The Iron Sheik was booked to win, only because he couldn’t physically handle being thrown over the top rope. 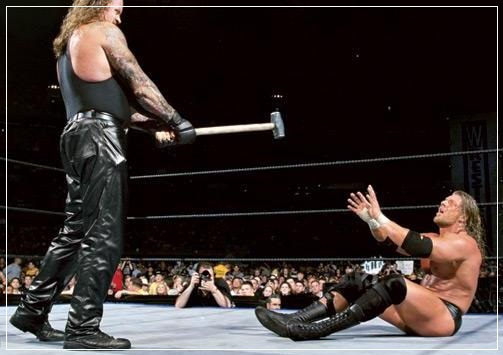 The semi-main event was an unruly, personal brawl between Triple H and the Undertaker, marking the first of their three WrestleMania bouts (one the company would ignore a decade later when they met again). While not on the level of their WM27 and 28 matches, this match was nonetheless a fitting featured bout that ranged all over the arena, spilling out to the hard camera platform from which Taker chokeslammed Hunter to the floor (onto some cozy foam cushions) and crushed him with an elbow drop. At the end of the battle Taker attempted a Last Ride on a bloodied Triple H only for Hunter to bash him with a sledgehammer for a very near-fall, before Taker hit the Last Ride on the second try for the win.

WrestleMania X-Seven was a PPV of huge significance, capping off possibly the company’s most financially lucrative period and unequivocally overshadowing WrestleMania III as their new PPV yardstick. This became the new prototype for the stacked supercard and began a new tradition of WrestleMania taking place in a stadium (minus ‘Manias 20-22) rather than a typical arena. At the press conference two months earlier I recall Vince saying “This won’t be the biggest WrestleMania ever, but it will be the best.” He wasn’t wrong.