These days, Melissa Santos couldn’t be any busier.

The Impact Wrestling announcer not only has her on-air responsibilities for the promotion, but she’s got a lot of of other things on her plate, as well. This multi-talented star is also a model, actress and mother, and it’s pretty clear that she knows a lot about juggling her responsibilities – both at home, and on the road.

However, she’s been even busier than usual the last few weeks. After all, it takes time to plan a wedding.

So, needless to say, she’s been on the go a LOT lately.

“It seems like everything is coming together right now, all at the same time,” Santos said in a recent interview with TheGorillaPosition.com. “On top of both of us being performers, there’s been the part of being about ready to wed, all the planning, and just the excitement of everything around us.”

There’s been a lot of excitement for the couple over the last few months. Santos was on hand, as her man captured his first World Title at April’s Rebellion pay-per-view. And even though it was a crowning achievement for Team Cage, she says it didn’t come without a price. 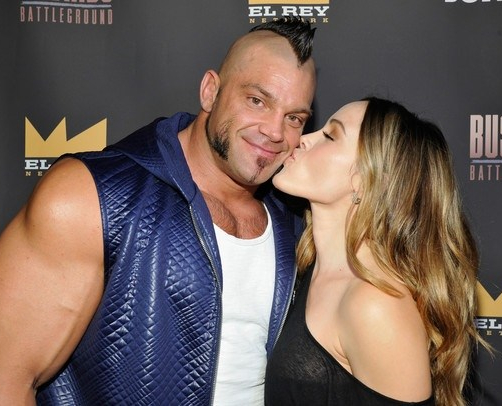 “It was a little bittersweet, because of his injury at the time of him winning the title,” she remarked “I think it was a lot more bittersweet for him, because I know that he wanted to be completely healthy at that time and in that moment.”

“I knew that he was hurt. So, I was worried for him. But, at the same time, I saw it in that moment, watching the match, and thought he won it like a true champion. He fought through it.”

The Swolverine has long been mentioned in terms of wrestling’s ‘future stars’, and Santos has been steadily by Cage’s side, watching him ascend from a promising prospect, to one of the premium names in the industry.

“Brian has been on the cusp of being that ‘top guy’ for a long time — but at that moment, he showed he was the top guy,” she said. “He muscled through it, and it was exciting to watch. Just to see how much the fans backed him up, and how much they wanted him in that position. I was teary-eyed.”

“I feel like Impact will be able to really build off that moment, and they have. It’s been a little overwhelming and even exhausting, at times, but it doesn’t keep us from being excited.” 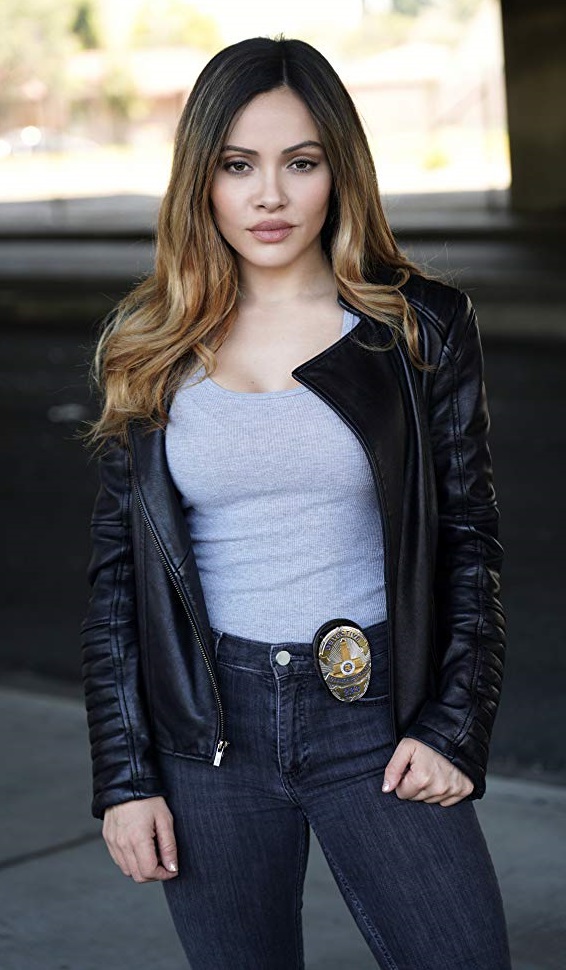 Santos followed Cage to Impact after a breakthrough stint as the ring announcer for Lucha Underground. And, although she may still be somewhat of a fresh face to some wrestling fans, her roots in show business go way beyond the squared circle.

A lifelong performer, Santos says that even as a child, she was always doing something to entertain herself, or those around her.

“I was a performance kid – a singer, a dancer, and an actor,” she recalled. “Then, in high school, I did weightlifting and I dabbled in tumbling and gymnastics. So, I was always very active.”

She eventually got some notable roles in the early 2000’s, appearing on television, and eventually working her way to the big screen.

Even with her success now in wrestling, she’s still active in Hollywood, and will appear in Thomas Haley’s Desert Moon, scheduled for release in December. Santos says she also has a few more upcoming projects in the works, and that she’ll always have a passion for acting.

“I just want to do all the things I can do. I didn’t stop acting – necessarily – when wrestling came along, but I just kind of put it to the side when wrestling started to take off for me. But, I don’t ever want to totally give it up.”

It was her agent who actually called her a few years ago, and informed her of an audition for David McLane’s Women of Wrestling. At the time, the company was attempting a comeback. One that eventually got put on hold for a few years.

Santos said that her opportunity there really opened her eyes to the industry. 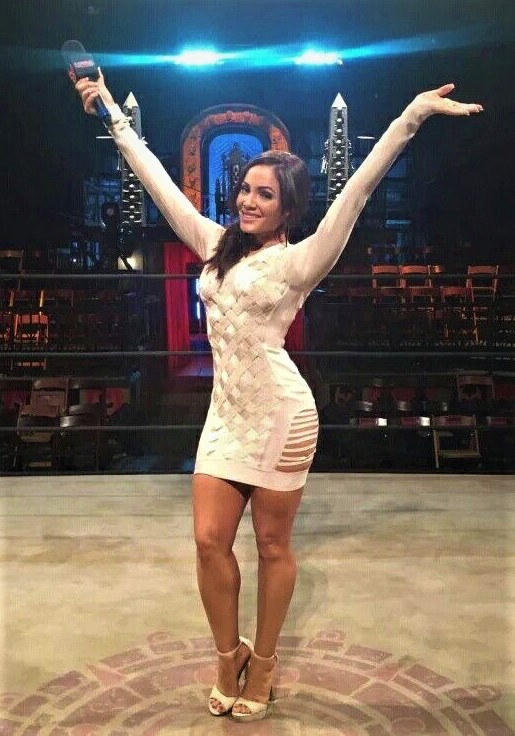 “I was not part of the indy world, and the only thing I was introduced to was WWE.  I liked what I saw as a kid, but I was never around wrestling. So, I became incredibly intrigued by it.”

“That was six years ago, and WOW didn’t really get off the ground again at the time, like they have now,” she continued. “But, about a year after that, a new show (which would become Lucha Underground) was just getting started. They needed a ring announcer who could speak both English and Spanish, and that could take a bump. So, I went in for an audition.”

“That’s how I got started, from taking bumps with WOW to doing a little bit of both with Lucha Underground. And, I absolutely fell in love with being a ring announcer. I love being able to connect with the crowd, really hype people up, and hearing that reaction from them.”

That connection with the fans continues every Friday night on Impact on Twitch, the streaming side of the promotion’s weekly show. Santos has become one of the most beloved figures in the company, due to her live updates during matches, and her interactive chats with subscribers.

Commenting on the onscreen storyline, while also mixing in a little bit of her real-life personality, she’s a big part of Impact’s innovative broadcast. Santos says the Twitch experience is unique for both her, and the audience.

“I have so much fun, and the producers really work hard to make it fun. We try to come up with stuff that makes the fans want to tune in every week. And, it’s very off-the-cuff. We have bullet points that we work off of, but other than that, we just let things flow. And, we feed off that fan interaction, as well.” 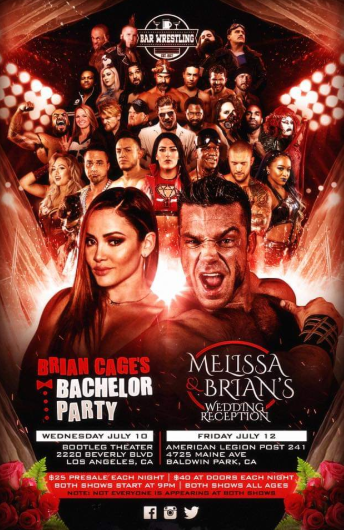 Cage and Santos welcomed their first child in January of 2018, and the announcer says that she makes sure to balance out life at home with life on the road. Between training and travel, the pair have made the adjustments to life as pro wrestling parents.

“You have to plan accordingly, and be meticulous, when you are in our business and have a baby,” she said. “I never used to be a patient person, and I always stuck to a very strict schedule.

“That all changed when we had our little girl. Now – it’s more like bullet points. We try to hit as much as possible, and then play it by ear. You have to do that when you have kids, but we also have tremendous family support, as well. So, that helps.”

Staying true to their professional roots, the couple will hold their wedding reception as part of a Bar Wrestling event on Friday night. (pictured).

Santos says even though life has been moving at a breakneck pace lately, she’s looking forward to continuing her progress with Impact.  And – of course – becoming ‘Mrs. Machine.’

“I’m feeling excited about our wedding day, the future, and everything we have been blessed with. It’s been amazing.”

The staff of TheGorillaPosition.com would like to congratulate and send best wishes to Brian Cage & Melissa Santos on their very special day – July 11th, 2019 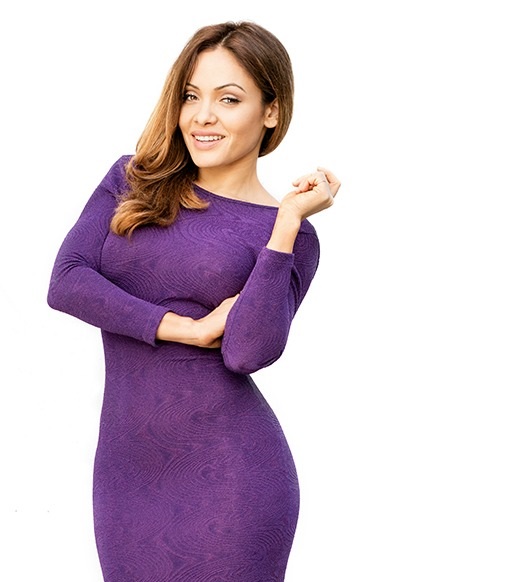 WATCH: BRIAN CAGE PROPOSES TO MELISSA SANTOS IN THE RING