On March 2, Impact Wrestling and MLW test the waters of collusion ahead of WrestleMania weekend.

If MLW and Impact are entering a cooperative relationship over WrestleMania weekend, then March 2 could be considered their first date.

For those that may have missed it, a bit of explanation is probably in order. Impact Wrestling and Major League Wrestling released a joint statement back on January 30 that both companies would be coordinating show schedules to ensure there were no conflicts when it comes to presenting talent that fans way to see on either show.

The statement, in part, reads:

MLW will present “Rise of the Renegades” at 7 PM on April 4th from the Melrose Ballroom. At 11 PM that same night, Impact Wrestling will present “United We Stand” from the Rahway Recreation Centre in New Jersey. The two venues are said to be about an hour’s drive from one another.

“This arrangement eliminates talent booking conflicts and ensures that loyal and passionate fans of both IMPACT Wrestling and MLW are able to attend our respective live events on April 4th,” said Impact Wrestling President, Ed Nordholm.

“Both promotions believe in putting the fans first,” said MLW COO Jared St. Laurent. “Fans will be traveling from all over the world in hopes of seeing the best of the best.”

With promotions scrambling to lock independent talent under exclusive contacts like never before, it’s refreshing to see companies working together instead of sticking to the old pro wrestling adage of “every man for himself.”

But then, this is nothing new. It just happens that Impact and MLW are two of the latest promotions that realize working together may be more beneficial than going head-to-head.

And they’re testing the waters on March 2.

On that Saturday night, both companies are putting on big shows six hours apart from each other at the same time. MLW presents Intimidation Games from Chicago’s Cicero Stadium. Two of the top matches from that show will air live on BeIn Sports that night, while the remainder of the card will be taped to air on MLW Fusion in the coming weeks.

That same night in Louisville, KY, Impact Wrestling is teaming with Ohio Valley Wrestling for “Clash In The Bluegrass” from the Davis Arena on Louisville, KY as part of the “One Night Only” pay-per-view series from Impact. No matches have been announced as of this writing, but after the recent incident between OVW Heavyweight Champion “Shotgun” Tony Gunn and oVe’s Sami Callihan on OVW television, it’s almost a lock that those two will “Clash in the Bluegrass.”

Both companies presenting big shows on the same night only his away from each other practically reeks of head-to-head competition. In prior years, that’s exactly what this would be. But, because of modern technology and some foresight, neither will be in conflict with each other.

Impact Wrestling’s “One Night Only” series is taped for broadcast on a later date. It’s been that way for the past six years whether the company has kept the shows in-house or worked with other promotions.. So while “Intimidation Games” airs its top matches live that night, “Clash In The Bluegrass” will be seen at a later date by those not at the Davis Arena on March 2.

Whether they’ve planned it or not, MLW and Impact’s first effort at cooperation should work out pretty well. MLW gets the spotlight on cable television, then hands that spotlight over to Impact and OVW on pay-per-view at a later time.

With fears of contract wars and talent being raided right and left being well warranted in the modern pro wrestling landscape, two companies the caliber of Impact and MLW working together to make sure the fans don’t lose out deserves some recognition. It’s a pattern that looks to continue with both promotions over WrestleMania weekend, but will hopefully continue to spread to others as the year rolls on. 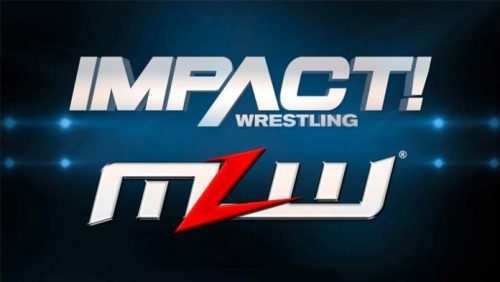