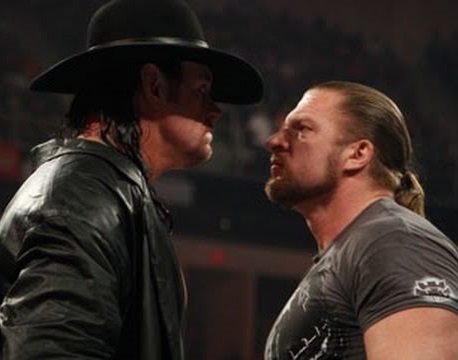 Twenty-two years ago, Triple H and the Undertaker had their first-ever singles match in the semifinals of WWE’s inaugural Kuwait Cup, doing battle to determine which of them would go on to face … Ahmed Johnson. (It was Triple H, and he lost to Johnson in the finals.) Suffice it to say, the stakes are a bit higher for this Saturday night, when these two titans will allegedly take the spotlight together one final time to headline Super Show-Down in Melbourne, Australia.

In the interim two-plus decades, the Game and the Dead Man have staged numerous televised clashes (helpfully delineated here on WWE.com), all of them in the continental U.S., and one early bout even occurring in the bowels of Manhattan’s Penn Station. Yet, despite their generation-spanning feud having epically and satisfyingly culminated in WrestleMania XXVIII’s Hell in a Cell crescendo in 2012—refereed by no less than Shawn Michaels—there’s no such thing as closure in pro wrestling—at least not when it comes to big money and bigger opportunities. And thus, six years later, these two eventual first-ballot Hall of Famers (should they ever, you know, actually hang it up) have relit the flame from that Mania send-off’s burning embers to help enable WWE’s push into the globe’s easternmost continents … Read the Full Story HERE