“Wrestlers are a bunch of wannabe football players.”
— Brian Bosworth

April is not only the traditional time of year for WrestleMania, it also marks the month when NFL teams line up the best college prospects for their annual draft.

These youngsters are weighed, measured, poked and prodded by a collection of eagle-eyed scouts and coaches. They’re put through a battery of physical and mental tests. Eventually, about 250 players will be lucky enough to earn an opportunity to finally get paid for putting on the pads. 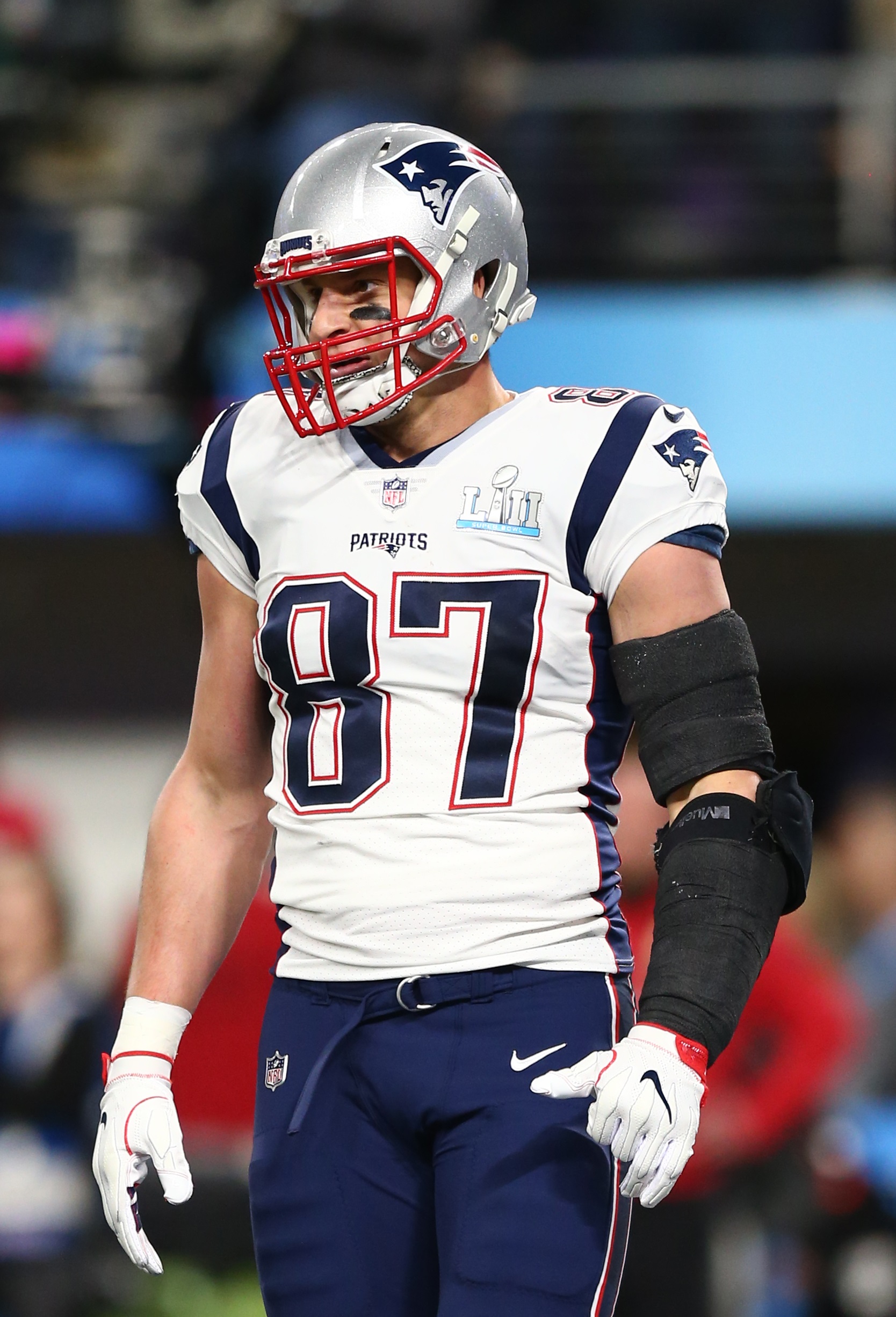 Out of that group, the majority of them will be out of the league within four years. But don’t worry. Even when their football career is over… there’s always WWE.

For decades, some of wrestling’s greatest performers originally got their start on the football field: From Bronko Nagurski and Ernie Ladd all the way up to Ron Simmons and Bill Goldberg, the natural size and athletic ability that’s part of the gridiron game can help make for a smoother transition to the ring.

They’re also two sports that somewhat blend together in the amateur ranks. Quite simply, a LOT of football players choose wrestling in the off-season – not only to compete, but to stay in shape and improve their footwork. In fact, according to huddl.com, about 6% of all NFL Hall of Famers also competed on the mat in either high school or college.

So, it’s a natural steppingstone to the squared circle. And for former New England Patriot Rob Gronkowski… it promises to be an even easier transition.

The 6’6″ and 270 pound man-child, known simply as ‘Gronk’, recently retired from The League, and is now contemplating a move to WWE. And, at first glance, he has everything you’re looking for in an athlete. First, even after finishing a successful NFL career, he’s still only 29 years old, and has the size and power that the promotion loves. Gronk also owns an uncanny 33-inch vertical, and was known to make some pretty acrobatic plays for a guy his size. 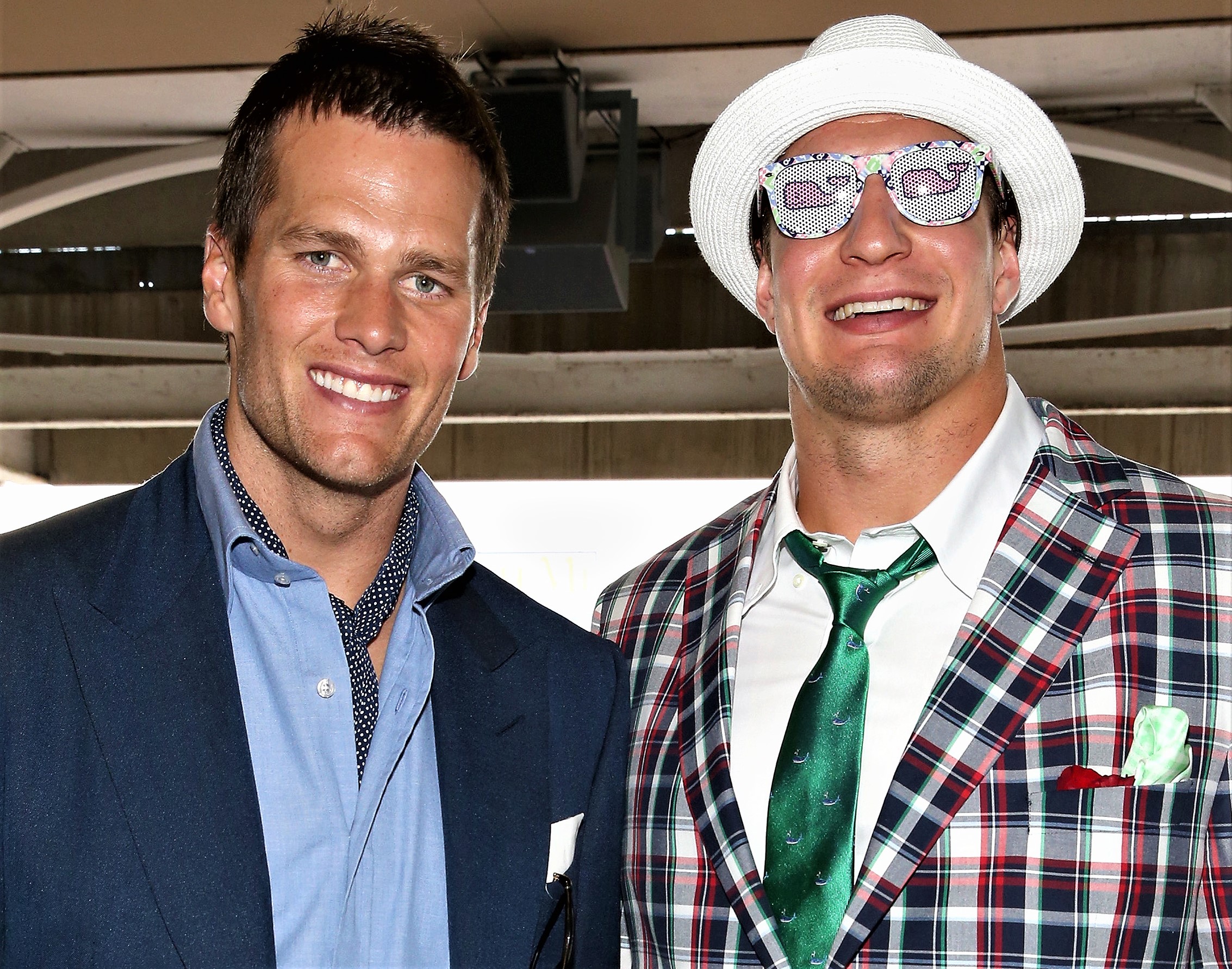 Aside from his freakish physical skills, the former Pro Bowler is also full of natural charisma. Always commanding a presence with his goofy smile or silly antics, he’s never been far from the spotlight, even while playing alongside the greatest quarterback of all time, Tom Brady. It’s a personality that will serve him well, if he truly wants to carve out a long-term career in sports entertainment.

So, WWE would be getting an iconic sports figure who’s not JUST a football player – he’s a cultural phenomenon. Aside from playing for one of the most high-profile teams in all of sports, Gronk has seemingly done it all off the field, as well. He’s known for being a jet-setting party animal, is followed by TMZ, and dates a swimsuit model. (and that’s just on a NORMAL day).

He’s also already appeared for WWE, and seemed pretty comfortable out there. He received a positive response from the wrestling audience, and knowing the McMahons, he’ll get EVERY OPPORTUNITY, to be a star in a new sport. He’s already being called out by some of the company’s superstars, and has received a public invitation from Stephanie McMahon.

WWE will show plenty of love for Gronk, because he gives them the thing they crave the most: Mainstream Credibility.

So, if Gronk decides to grapple, he will likely get the ‘Rousey Treatment’, and be literally baby-sat in to a main event spot. In the process, the audience will be constantly reminded of all his championship rings, his celebrity appearances, and the magazine covers he’s been on.  That way, WWE gets to count one more, ‘real star’ among their Universe.

And that’s the overall perception that they really want to create: That WWE is so much a part of pop culture that even Super Bowl winners, UFC Champions, and American Ninja Warriors want to get in on the action. 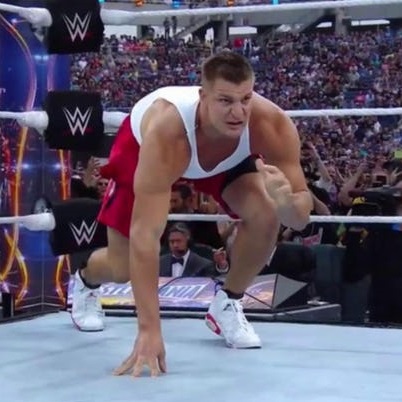 If you have any mainstream cache whatsoever, you fill a very important need for the folks in Stamford: The need to feel accepted as part of Americana.

While I have no problem with Gronkowski seeking out a second career as a pro wrestler, it’s a shame that WWE still feels the need to ‘make-good’ with the mainstream by pushing non-wrestlers in to major roles.

When the NFL Draft takes place in a few weeks, every player selected will potentially take the spot of an aging football veteran. It’s an ‘out-with-the old-and-in-with-the-new-process’, as there are only so many roster spots to go around. A lot of guys will go from making six-figure salaries, to being out of a job.

WWE is the same way; There are only so many matches and so many main events. So, if they sign Gronkowski, and slot him according to his fame, he will be taking a top spot at the expense of a ring veteran or a fellow prospect. And that’s a shame.

With his incredible talent and magnetic personality, Gronk might turn out to be an amazing sports entertainer someday. And, I certainly wish him luck. However, it just doesn’t seem right that he’ll get to start the game already on the goal line.

Ryan Boman is the Editor-in-Chief of TheGorillaPosition.com and a freelance writer whose previous work has appeared at The Miami Herald, SB Nation, The Southern & 1Wrestling