NOT the Universal Champion, apparently, who seems to be having a chuckle or two at the expense of the WWE audience. And, believe it or not, we haven’t even made it to the punchline yet.

If you believe reports that have been circulating, Brock Lesnar’s official WWE status is somewhat of a joke right now. He’s officially off the card for Extreme Rules, and now there’s some speculation that RAW’s most vaunted championship might not be defended at SummerSlam, either.

For the record, Lesnar has had a stranglehold on the Universal title, carrying it for three quarters of its laughable existence. In those 450-plus days, he has put it on the line a grand total of six times. And none of those contests have ever occurred on Monday Night RAW, the show he’s supposed to be carrying the banner for.

It’s no secret that the former UFC champion has been itching to return to the Octagon, and most fans believe his lack of passion for pro wrestling is a blatant sign of disrespect. For them, holding any cherished championship is something to take seriously, but it’s becoming pretty obvious that Lesnar doesn’t think too much of all this ‘phony competition’. 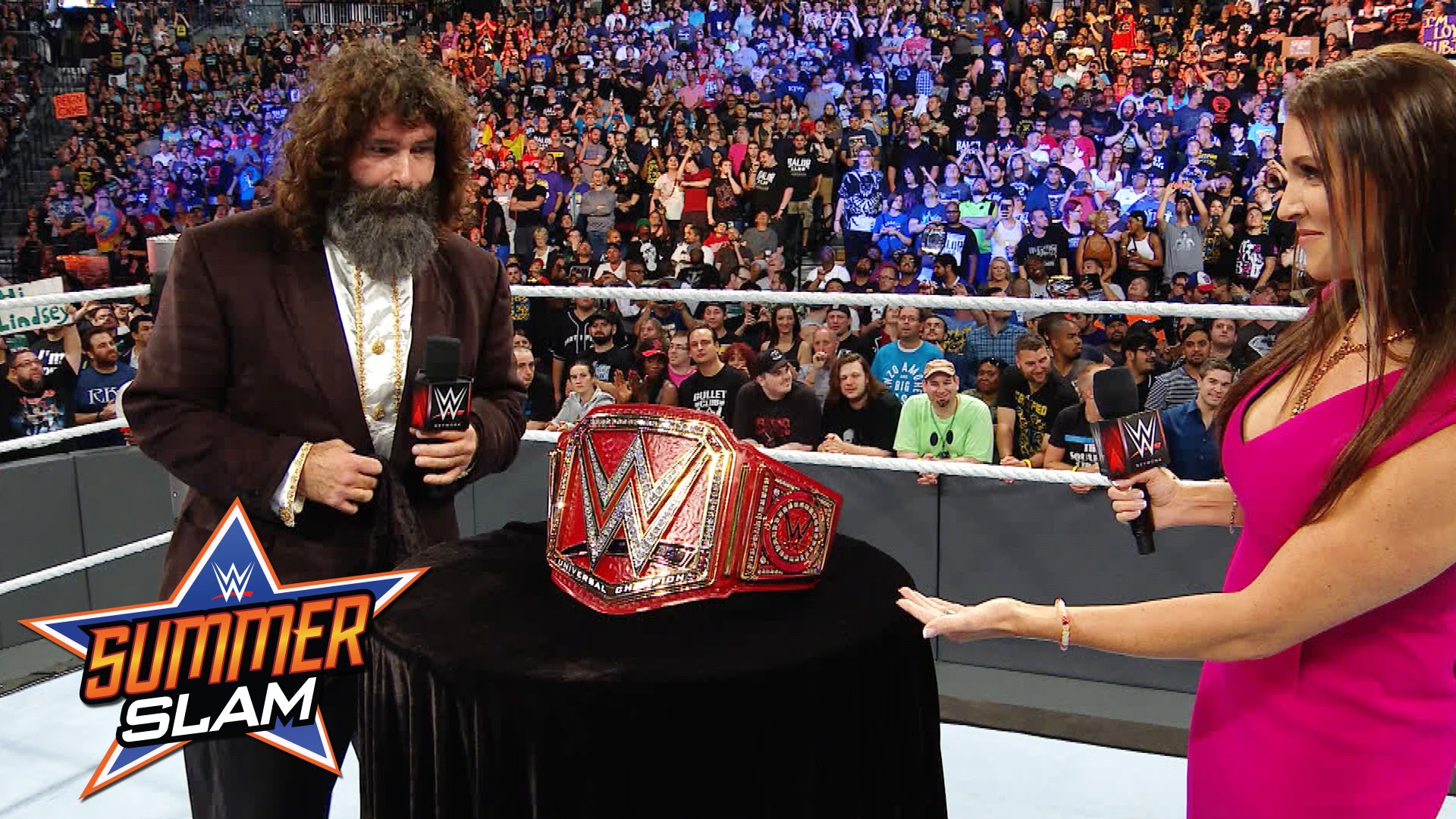 Because of that, he’s received a lot of negative press and push back – and rightfully so. After all, if he truly thinks worked grappling is all just a bunch of silliness, maybe he should go back to a ‘real sport’ to get his kicks.

But in the end, it isn’t really Lesnar who is the one to blame for making this title a farce… It’s the people in charge.

During its nearly two years of existence, the WWE Universal heavyweight championship has been viewed by the company more like a troubling trinket, instead of a treasured title. Their decision to have a second world champion (as part of another ridiculous brand split) has been nothing more than a comedy of errors.

First off, there were problems right out of the gate. Not the least of which was the fact that MOST wrestling fans prefer a company to have only one world champion. It just makes sense. It’s traditional, and it gives the audience more of a central figure, rather diluting everything by dividing storylines, loyalties and attention spans.

Also, from a fan’s perspective, the physical belt itself has never been very easy on the eyes. It’s like the red- leathered stepchild of the WWE championship. 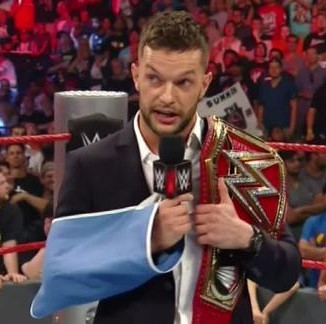 When the company unveiled this monstrosity in mid-2016, it looked like something straight from a Toys ‘R’ Us liquidation sale and was lampooned by the Universe that it supposedly represents. Fans actually taunted the title so much during that first match, Seth Rollins felt the need to go to his Twitter account and address the ‘belt shaming’ that had occurred that night.

Then, to make matters worse, the first titleholder (and soon-to-be fading NXT prospect) Finn Balor, would relinquish it, right after being crowned the inaugural champion. That took a lot of momentum away, almost immediately.

Kevin Owens would then be on top of the Universe for a very forgettable six(?) months, before it moved into the realm of being a “special title for special attractions”.

At least that’s how it’s been portrayed for over a year now. The biggest highlights of the championship’s entire existence have been the two matches between Lesnar and Bill Goldberg, both of which lasted no longer than a tickle fight.

Even the euphoria from that Goldberg rivalry seemed to die down as quickly as it came. Now, The Beast has settled into simply swatting away a challenge from Roman Reigns every few months. 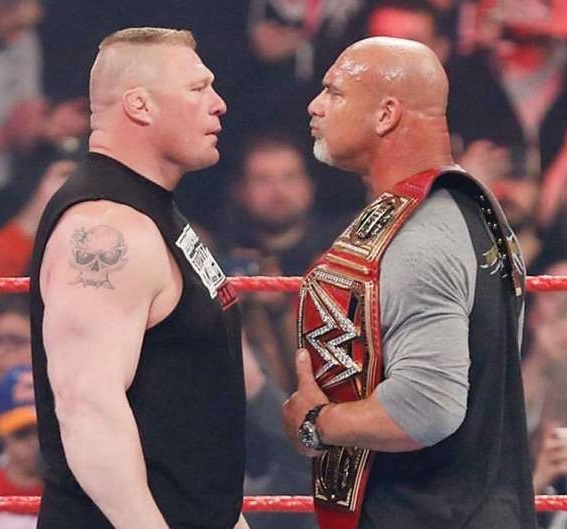 Since that initial WrestleMania 33 victory, we’ve waited on Lesnar’s eventual loss and departure back to the world of Mixed Martial Arts. It’s been almost 500 days now – while everyone in Stamford tries to figure out the right way to get an unnecessary championship off of an un-interested champion.

On Mondays, it feels less like a belt, and more like an noose. For not just the audience, but also the company, who have had to explain away Lesnar’s absences with some pretty lame storytelling.

The true tale behind all of this, is likely tied to the cash register: It’s been estimated that The Man from Suplex City receives a half-a-million dollars per match, and a cool 100 grand just for walking into the arena. That probably explains why you don’t see him out there cutting promos every week.

Still, WWE knew of their situation with Lesnar when they put the belt on him, and yet felt the payoffs would be worth the backlash. (Oh, and speaking of Backlash — It’s yet another event where Lesnar didn’t defend his title this year — for those WWE Network subscribers keeping score at home)

The championship that, for all intents and purposes, was supposed to be the RAW brand’s version of the ACTUAL World title, is essentially worthless now. Crippled out of the gate, and put to death by an apathetic champion.

At the end of the day, the Universal belt was never really necessary or wanted; it was merely just a way to get to some big time matches and bring in some part-timers in for a payoff.

And also to sell pay-per-views. And tickets. And over-priced, gaudy replicas.

In wrestling terms, it has no traditional value, and never will, based on the fact that it’s never really been taken seriously by anyone since its inception.

This eyesore of an accomplishment has been nothing more than a pie in our collective face … Now, it’s time to wipe it away.

Pull the plug on this failed experiment – or better yet – merge that ugly hunk of metal with the real WWE World title again. The same title that has ALWAYS meant the most. No carnival sideshow will ever replace it, nor be its equal, and everyone in the so-called ‘Universe’ knows it.

However, if WWE holds to their usual form, the Universal title likely isn’t going anywhere. And, if the whispers are true, Lesnar has only agreed to one more match with the company so far, which is presumably to drop the title to a full-time competitor. That’s probably what the folks in Stamford are waiting for: the right moment, to cash in on that final appearance.

And the biggest knee-slapper of them all? That last match will STILL probably be with (stop me if you’ve heard this one before)… Roman Reigns.

I guess some jokes just never get old.