“It has been said that something as small as the flutter of a butterfly’s wing can ultimately cause a typhoon halfway around the world.” – Chaos Theory

Sometime in the middle of 2016, Cody Rhodes saw the tide rolling out.

Standing on the comfortable shores of the WWE Universe, a second-generation legacy, he had everything any professional wrestler could ask for: Money, fame, and a beautiful wife. It would have been very easy to just float through life from that point forward.

But instead, Cody decided it was time to make some waves. Frustrated by how he was being booked and maybe even a little troubled by what he’d become, Cody Rhodes did the unthinkable… He waded out into the waters.

To some observers, it seemed as if he was simply settling- taking an easier path for more control, less money and a future of relative obscurity. Like anyone else who ever departed Titan Towers, he would surely live to regret throwing away his ticket to the circus.

But, for Cody, he wasn’t throwing anything away; he was simply at a Cross Rhodes.

Instead, the bold move, as well as his calculated actions since, have made Cody an even more marketable star. By going ‘underground’, he became wrestling’s version of Robin Hood: He took his talents from the corporate rich, to lend them to the independently poor.

His unconventional route continued when he joined the industry’s biggest group of  rebels, The Bullet Club. He gave the stable the legitimacy of a mainstream superstar; they lent him a little of their street cred. 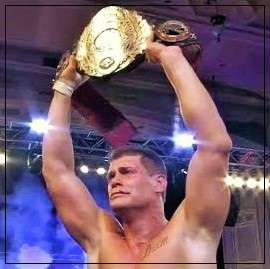 After spending weeks as a free agent, popping up all over the wrestling landscape, Cody was ready to tilt the axis a little more. The waves kept rolling, when earlier this year, he captured the World Championship of the seemingly-always-expanding Ring of Honor. The timing of his arrival couldn’t have been more perfect, as much of the company’s homegrown talent was in the process of moving on.

Since Cody’s bold move, a shift in the industry has taken place. Many wrestlers who are comfortably signed to large promotions, particularly WWE, have considered taking the same plunge. Managing their own careers, taking responsibility for both the risks and rewards. No doubt, they’ve been influenced by the tremendous economic success and cult-like status that Cody and his Bullet Club brethren have earned all on their own.

Cruiserweight standout Neville recently made the jump, and many other WWE performers have asked for, or are considering a release to weigh their options on the open market. And, the ripple effect of the independent life seem to be taking hold even further. This week’s announcement of the Chris Jericho vs. Kenny Omega match is another example of wrestling’s barriers being blurred. Before this new era of ‘open borders’, that epic confrontation would have been nearly inconceivable.

But, since Cody’s magical mystery tour, and the reaction that followed, those walls are slowly crumbling. The ‘boogeyman effect’ of locked-down, guaranteed contracts has been shaken by the acumen with which Rhodes has handled his solo run.

In the years to come, the decision that The American Nightmare made back in 2016- to go it alone and find individual success- is already having an influence on the generations that follow. From appearances to merchandise to persona, the industry’s future will depend on wrestlers taking full control of their own identities, and in turn, their own finances.

In the grand scheme of things, the Cody Effect has been a strong impetus for a brighter wrestling future. One with more open doors, hopefully, for both the wrestlers and the fans in the years to come.

And it all started with one guy, who made a conscious decision to make a few waves…