My entire life, I’ve been fascinated with the way that the legendary Dusty Rhodes used to talk.

I think it’s safe to say – at one point or another – every wrestling fan has imitated The American Dream’s unmistakable allegory. And along with it, evoked some vivid memories of hot Florida summers, or Greensboro in the wintertime.

Known not just for his memorable lisp, but the way he used his words, he could “talk them into the building”. A single promo could incite so much emotion during an inerview that you just had to buy a ticket. 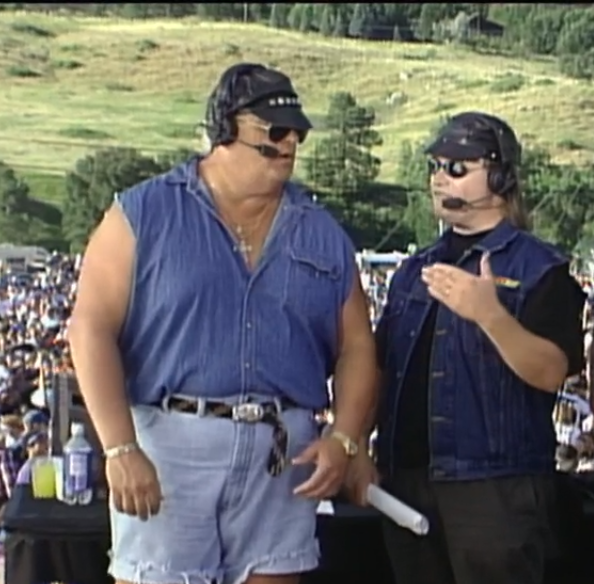 With a strange mix of Willie Dynamite

, Rhodes created an unmistakable vernacular that has been often imitated, but never duplicated. While being both purposely sly and accidentally funny, the man known as Stardust had his own, special way of getting his point across.

It’s a simple, rhythmic language, that historians will probably some day refer to as Dust-ese.

However, often overlooked among the studio interviews and all the “Hard Times”, some of the most entertaining work of Rhodes’ career came as a color commentator on WCW broadcasts.

Panned by some critics for sounding a little too southern, the fans didn’t seem to mind it all that much. Rhodes’ folksy regional charm punctuated some of the most hilarious calls in wrestling history. Along the way, his trademark jibberish and sing-song delivery provided a soundtrack for some the sport’s most quotable moments.

For example, there was a famous instance during a match between The Public Enemy and Harlem Heat

, when Big Dust went wildly off script and couldn’t stop laughing. His bubbling enthusiasm and uncontrolled joy only added to the broadcast, as if a big kid had just been handed the microphone. 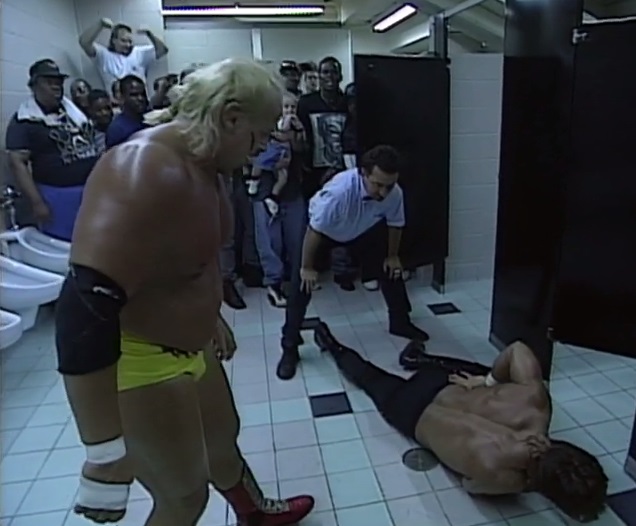 Or, there was the time when Ray Traylor grabbed a bicycle from the side of the stage area and used it as a weapon (something unheard of in WCW at the time). Like a morning rooster call, Rhodes’ voice went up a couple scratchy octaves, as he struggled to explain what mayhem ‘Bubber’ was about to cause.

But perhaps the magnus opus of Rhodes’ comical, color commentary, however, is the falls-count-anywhere match involving Chris Benoit and Kevin Sullivan at the 1996 Great American Bash

. It’s not only remembered for brutally spilling into the men’s restroom, but also for how the Dream expressed his vision of the events.

To the average observer, there’s no way to describe the exasperated oil painting that came out of Dusty’s mouth that day. It was a load of rapid-fire ‘rasslin’ rhetoric.

But if you ask a die-hard wrestling fan to quote, “There’s a Lady in the Men’s Room!”, he can probably reel it off in much the same way a fan of comedy or baseball can recite, “Who’s On First?” It’s that memorable.

Also just like baseball, Dusty was a Harry Caray-type figure on a broadcast. He may not have always described the action clearly, but it sure was a lot of fun to listen to. 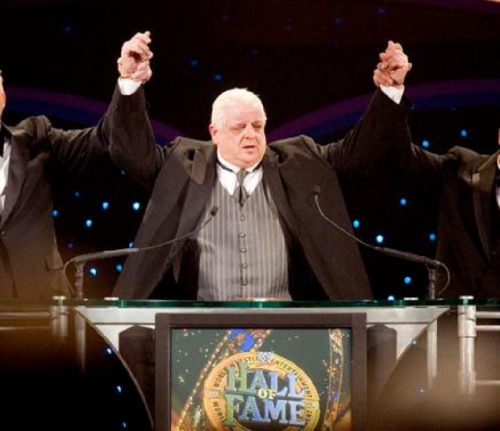 And you loved him for it, baby. You loved him like toast loves the mornin’ sun… if you will.

So, when you mark down all of Dusty Rhodes

‘ accomplishments, don’t forget to add that he was also one of the most entertaining color commentators of all time. It’s an easily-overlooked honor, considering everything else he achieved in his life.

It’s only fitting that in nearly every rugged wrestler’s voice, or animated announcer’s scream, there are echoes of The Dream resonating still today. Because, simply put, Dust-ese was just a language that we could all understand.

His voice… his bluster, was the sound of a generation. In more ways than one.