Standing atop their respective divisions are two of the most striking beauties wrestling has ever seen, Alexa Bliss on RAW and Carmella on Smackdown Live. A pair of perfect, pin-up girls, they’re easy on the eyes, all while being rough on their opponents.

Upon first glance, the two titleholders are almost a wink and a nod to a darker time of women’s wrestling. With their platinum hair, Colgate smiles, and Barbie Doll looks, they could have easily fit into the company’s era of pillow fights and panty raids. Back in the days when Hugh Hefner was always on speed-dial.

But what makes both Bliss and Carmella special has nothing to do with centerfolds. It’s more about blueprints. Because in today’s WWE, appearances aren’t enough, and wearing a tiara doesn’t guarantee a title reign. You’ve got to combine all the elements, if you plan on making an explosion at the next level.

Not to be ignored – Bliss and Carmella do play rather well to the young, male demographic: They essentially look like your typical, high school hotties… the ones who you begged to sign your yearbook. And while Alexa and ‘Mella easily get an A+ in Attractiveness, they’ve also been studying hard as in-ring performers.

Bliss, in particular, has truly beaten the odds as an under-sized champion. During her multiple reigns, she held her own in the power department against much larger opponents – proving that even at just under five feet tall, she’s definitely not short on savvy.

Carmella came about her ascension more recently and rapidly, and doesn’t have Bliss’ ring resume or skill set. But recently, the Smackdown Women’s Champion has shown signs of life as a wrestler. More importantly, she’s shined in the area that will likely make her a superstar, mastering the ability to work a crowd, and proving every week, that ‘Mella is Money on the microphone.

Beyond the blonde, the two wrestlers have also followed somewhat similar paths to success, as well. Both performers entered the main roster with much less fanfare than some of their fellow competitors.

When other females like Asuka and Bayley moved up from NXT, they received a near-christening from the company and the crowd. Meanwhile, Bliss came in the door relatively quietly. At the time, some ‘experts’ questioned her technical ability, and felt like she might not be ready for the big stage.

In the past two years, she has gone on to become one of the top two women (along with Charlotte Flair) in WWE, holding both the Smackdown and now RAW titles, each on multiple occasions. Bliss has also fully embraced her spiteful, ‘Mean Girls‘ persona, and has been able to turn people’s emotions on a dime with some of her better promo work.

Oh yeah… She’s also one of two women to win the Money in the Bank briefcase.

The OTHER MITB winner? Carmella was considered a third wheel by many, in a team that actually set out without her on the main roster. Because of that, her debut in WWE was an afterthought . And, she certainly didn’t get the same ovation that her stablemates, Enzo and Cass, got when they initially got promoted. Today, they’re no longer with the company.

On the flip side, she’s a world champion, and still moonwalking her way around prime time.

Now, both Bliss and Carmella have moved past many of their roster mates, and look to be cornerstones of the division for years to come. In an era where substance is supposed to matter more than style in women’s wrestling, the WWE titleholders have blended the two… mixing suplexes with sexuality, and proving that Beauty can still rule the ring – as long as She knows how to throw a decent Mafia Kick.

Make no mistake: neither woman is going to develop to the level of Jack Brisco in terms of pure grappling. But both are fantastic athletes and are committed to expanding their arsenals. In fact, their greatest weapon may be psychology, as they’ve shown a penchant for blending their bitchy characters with dastardly deeds in the ring.

Bliss actually earned a whole new level of respect when she faked a disclocated arm during a match last year, only to snap it back into place and take advantage of a confused Becky Lynch. That kind of physical voodoo is about as old school heel as it gets.

Carmella, meanwhile, has evoked some of the same, East Coast elements that Enzo and Cass employed, playing the role of the girl from the block to perfection. Throw in a little bit of arrogance and shot of Ellsworth, and this vivacious creature has somehow found a way to make your skin crawl. 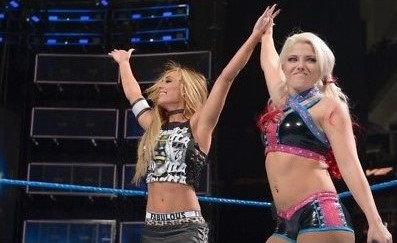 As part of its so-called ‘Women’s Revolution’, WWE finally discovered that very attractive females can be great athletes, and both current champions are thriving as a part of the next step in that process. They’re a mix of ability, and marketability, that will be the trademark of the division in this new era.

Alexa and Carmella have the posh and the polish to be potentially labelled as “Divas”, but have garnered a deeper respect by simply finding their own niche. One that goes beyond the skin, the hair and the nails.

So, in essence, Bliss and ‘Mella are a part of WWE’s plan to build a better bombshell.

After all, they say looks can only take you so far. But both Alexa Bliss and Carmella add to that with their multiple talents. And, that’s what sets these two champions apart… That’s what makes them truly beautiful.