On May 13, Rip Rogers, posted the following note on Twitter: 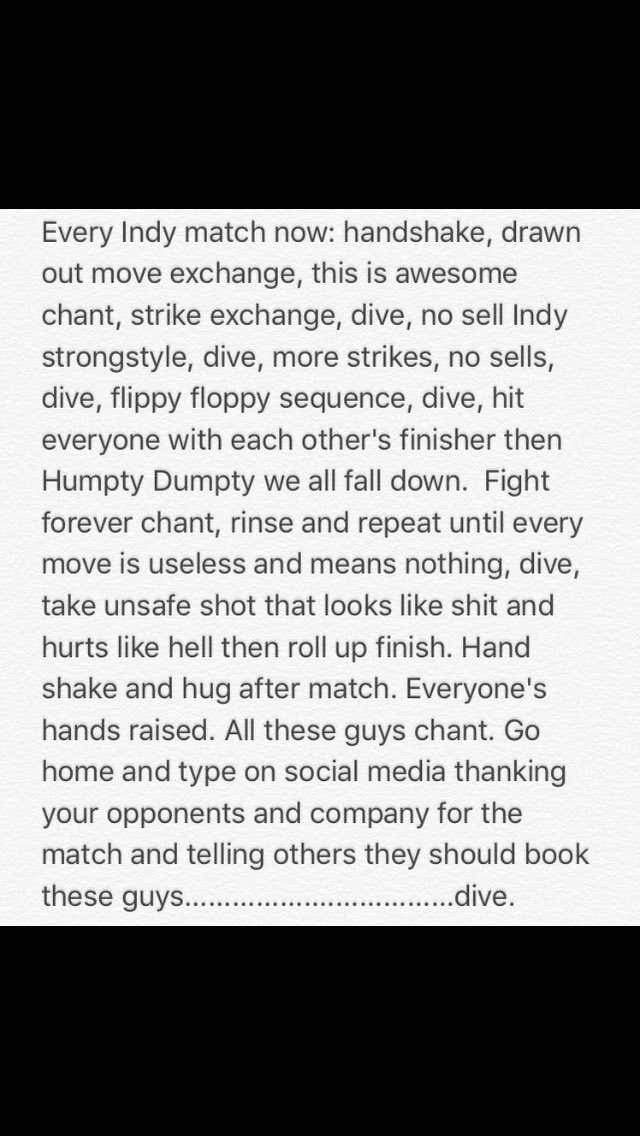 Randy Orton promptly retweeted with “…dive” as his caption. Then, the following exchange took place: 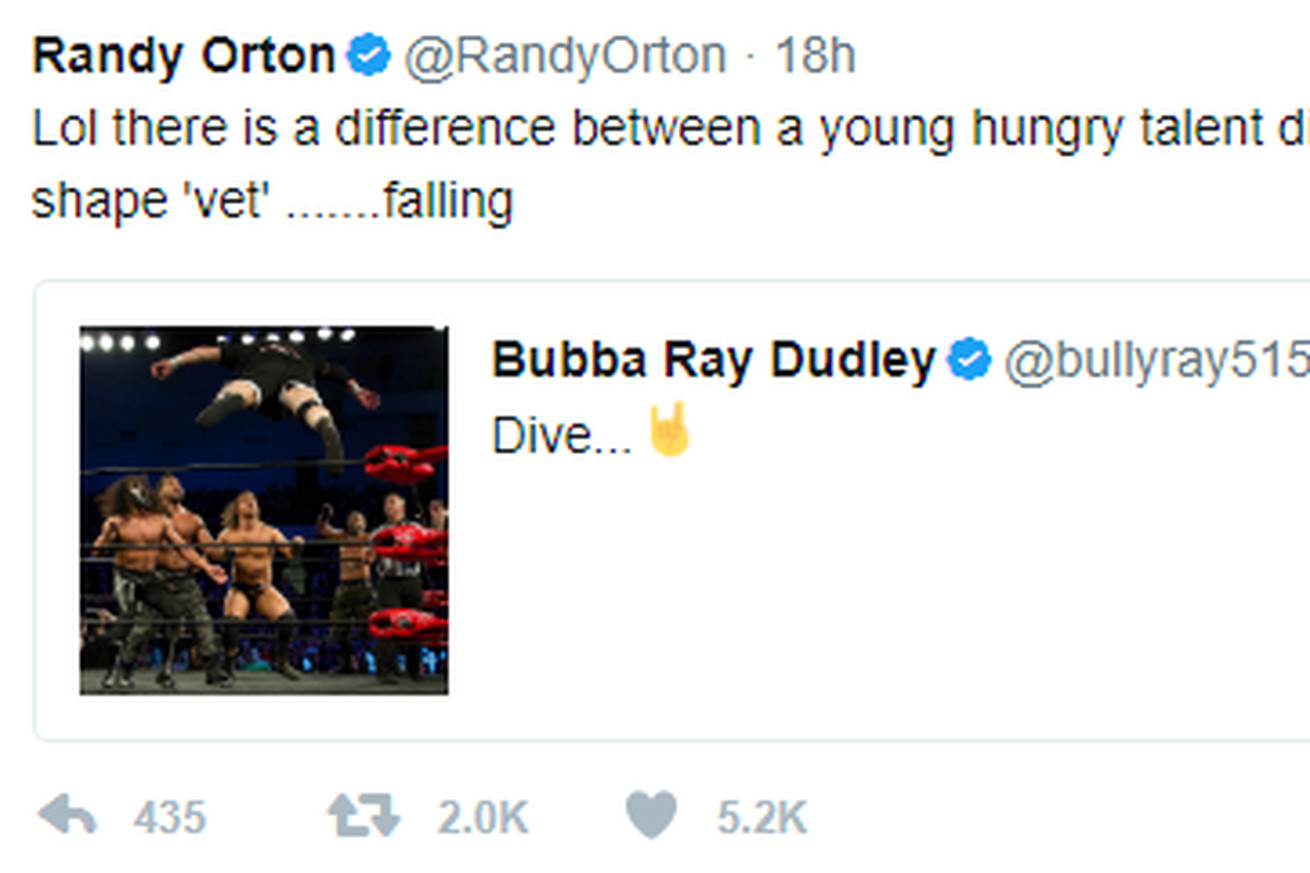 The Internet Wrestling Community, the collection of smarks known collectively as the IWC, absolutely lost their minds, quickly and harshly criticizing everything about Orton: his privileged position in the industry, his boring title reigns, and even accusing him of hypocrisy. Then Randy decided to troll them all with an “apology”: 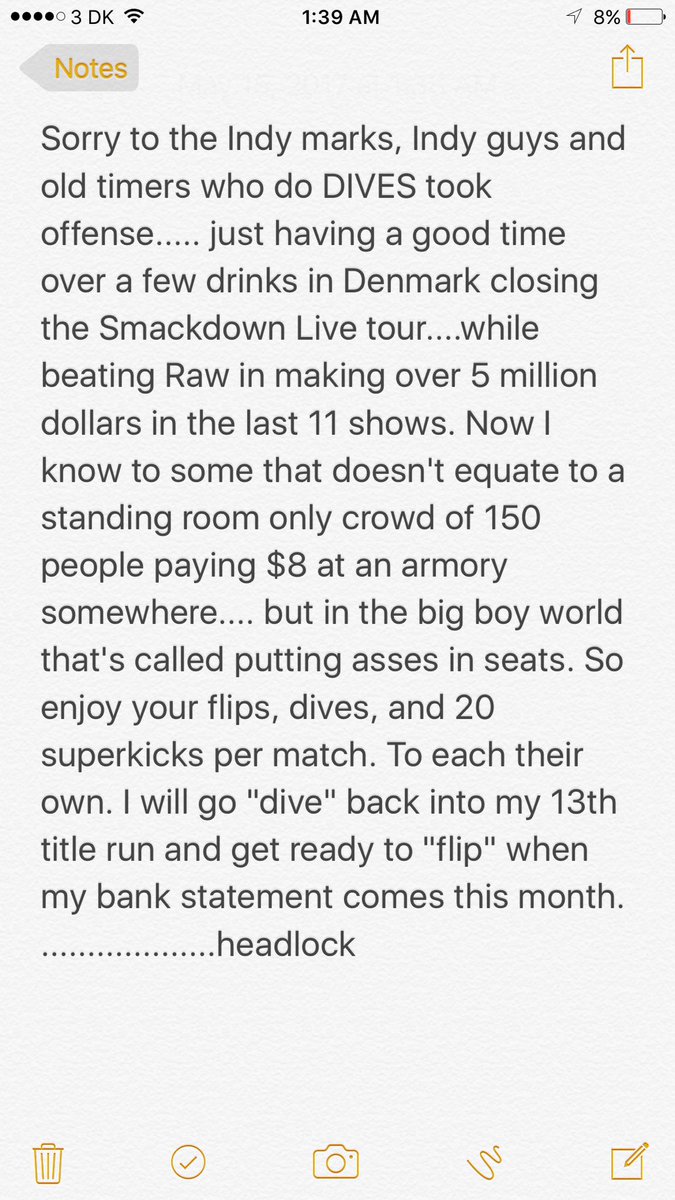 On Monday, Cody Rhodes had the following to say on Bubba Ray’s BustedOpen Radio show:

So, who’s right here? Well, first and foremost, Rip Rogers is pretty much 100% correct. Many indie matches DO operate on a predictable formula, and the ability to tell a story does seem a lost art for the younger wrestlers out there. The suicide dive is a cool move…until EVERYONE does it EVERY match. This isn’t just a problem for the indies, however. I can’t remember a match on Raw without a suicide dive in the last 6 months other than Braun vs. Big Show. On top of that, the lack of selling and failure to protect finishers has simply gotten ridiculous in the last several years. Yes, sometimes it is good to have a gimmick that centrally incorporates no-selling, such as Shibata in NJPW, but the vast majority of the talent should be selling almost every move they get hit with. Rogers is also right about the finishers. Watching a match where everyone gets to hit their finisher but none of them get finished is just irritating. There are maybe four or five finishers in the entire business that are properly protected at the moment, and there is no excuse for such stupidity. Protecting finishers is not even especially hard, you just have to be able to tell the talent that they don’t get to show off all of their moves for no good reason. Again, this is a problem that goes well beyond the indies.

Another good point that Rogers brings up involves the fact that many of the moves being used today look extremely unrealistic while also putting the wrestlers’ safety at risk. While every other staged drama on television has been getting more realistic, professional wrestling has been getting less so over the last few decades, and the ratings show it. WWE is currently pulling around 3 million viewers a show; during the Monday Night Wars, there were a combined 10 million viewers tuning in every Monday. It is clear that the majority of fans are turned off by the direction the business has taken in the last fifteen years. While it is fairly unwise to be using these unrealistic displays in a WWE match, it is even more unwise to do them in indie events where the performer is risking catastrophic injury, and pretty much guaranteeing poor quality of life in 15-20 years, for $100-$150. Rogers is right, this simply makes zero sense.

As for Cody’s comments on there being plenty of money to be made in the indies, he’s right…if you are already a big star. First, let’s recognize that anyone named Rhodes is an absolute exception to any rule you can think of in this industry. Second, let’s remember that while there have been several guys of late that came up through the indie promotions and were able to build a following there, they all learned to tell a realistic story with their matches and they all jumped to WWE eventually because those indies really don’t pay that much unless you are so huge that you can fill a place like the Cow Palace, as Cody was bragging about having just done. Also, when pointing to the guys who made a big name in the indies, it is instructive to remember that while they may be big stars among the few thousand people that make up the core of the IWC, they have little name recognition with most fans. Yes, Styles debuted to perhaps the largest pop in recent years for a WWE crowd, but AJ is not really an indie product. He made his name in TNA, a promotion that, while young, does not in any way qualify to be called an indie. They started with a large amount of cash, quickly brought in huge stars to attract attention, and had a major TV deal right off the bat. The promotion was basically an effort to continue WCW in a slightly different format. All of this is to say that being really over with the IWC doesn’t pay very much. If these performers want to make real money, they need to learn to wrestle, not just jump around like gymnasts with no appreciation for the realism or story.

Now, onto Orton. Randy is taking a lot of heat he really didn’t deserve for retweeting the original post. It makes a lot of good points and, in any case, he didn’t write it. The heat he is taking for his follow up tweets, well, that he deserves. He intentionally tweaked the indie guys and fans, especially in his “apology,” and the backlash he received was fairly earned. Orton was born on third base in regards to this industry, and he is often one of the worst perpetrators of no-selling in the WWE. Orton was a great talent in his early years, but he seems to have been coasting for the last decade. He was recently handed what should have been the best story of the last few years and managed to appear to be mailing it in most of the time, so much so that a really appealing story line just fell flat. Also, for him to take credit for SmackDown drawing more than Raw on the European tour is simply an inability to recognize reality. Those fans are paying to see almost all of the undercard talent more than they are to see title feud at the moment.

The main point I am driving at here is to separate your criticism of Orton, much deserved, from your criticism of the points his tweets and retweets made, some of them very sound. I once heard Vince Russo say something very smart (just once): “Professional wrestling is best when it has compelling characters, compelling storylines, and realistic competition.” I’m not a fan of most of Russo’s proclamations about the business, but this one is wise. These three items are the basic requirements for any good match or promotion. WWE and the smaller promotions would all do well to adopt that motto.