For most wrestling fans, Colby Covington is just one of the background guys that accompanied Dan Lambert to ringside during the Impact angle where the owner of American Top Team struggled with Jeff Jarrett over Bobby Lashley’s future. Covington, however, seems to have spent his time backstage at Impact well, learning how to be a relentless heel and that, as Dale Earnhardt once said, “It doesn’t matter if they cheer you or boo you, as long as they ain’t silent.”

Colby “Chaos” Covington wrestled in high school, winning a state championship in Oregon as a senior. He then moved on to Iowa Central Community College where he won a national junior college title as a true freshman. After being bounced from the team for a DUI conviction, Colby returned home and enrolled at Oregon State University, from which he earned two PAC-10 championships and All-America honors.

After graduating from OSU, Covington moved to Florida and joined ATT, training many of their fighters in wrestling while beginning his own training in other martial arts that would allow him to begin a professional MMA career. 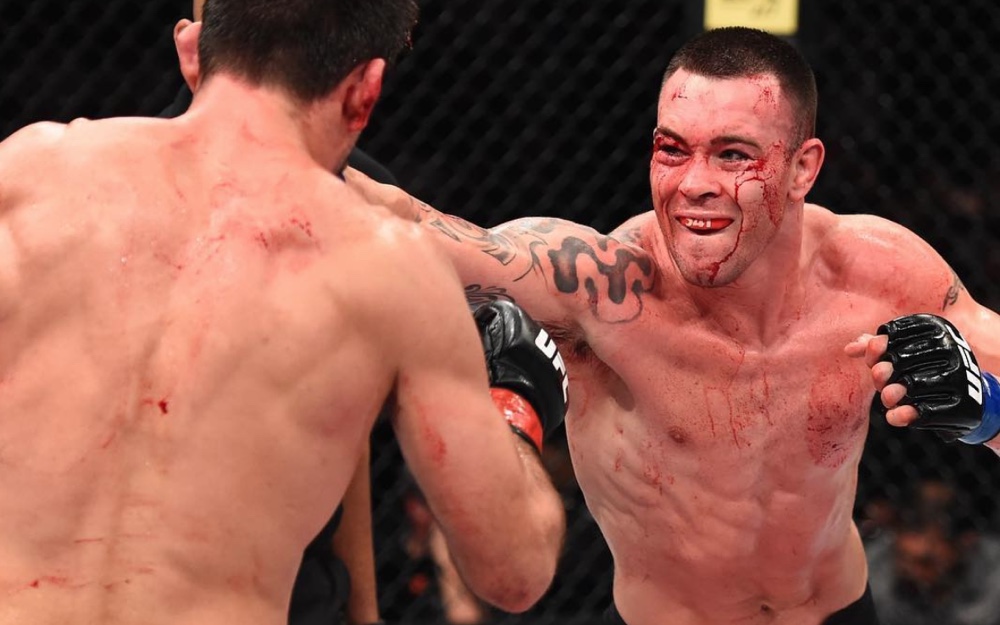 “Chaos” had his first professional fight in 2012, and has gone on to amass an impressive 14-1 record, his only loss coming in the form of a choke submission to Warlley Alves in December of 2015. Colby climbed the ranks of the sport slowly, winning fights with his pressure and wrestling, but getting very little attention for his success from most fans.

Then came the Impact wrestling angle. Covington had recently hired a new strength and conditioning coach, Stevie Richards (yep, that Stevie Richards), and then in mid-2017, Lambert led a group of his fighters, including Colby, to the Impact arenas to support Bobby Lashley and, hopefully, convince him to leave pro wrestling forever for a full-time MMA career (angle, not real).

At some point in this time frame, things seem to have clicked in Covington’s head. The combination of the former leader of Right to Censor as one of his coaches, his time observing Impact events up close and personal, and his own sociology degree from Oregon State showed him that the path to fame and fortune lie in separating himself from the pack and becoming hugely recognizable…and the easiest and quickest way to do so was to go full heel.

Go full heel he did. In October of 2017, Covington traveled to Sao Paulo, Brazil, to face hometown favorite Demian Maia. After winning a unanimous decision over Maia, Covington grabbed the mic and, in true pro wrestling heel fashion, called Brazil a dump and the residents of Sao Paulo “filthy animals” who “suck.”

In the ensuing months, Covington stepped up the heel persona. A few weeks after the win over Maia, Covington traveled to Sydney, Australia, for a UFC event. While there, he pcked a fight with the heavyweight former champ, Fabricio Werdum, in the parking lot of a hotel. Werdum, already incensed by the remarks a few weeks earlier, threw a boomerang he had just purchased at “Chaos.” In true heel fashion, Covington filed a police report and tried to have Werdum arrested, claiming to have been assaulted by a much larger man for no good reason.

As MMA fans became more polarized over Covington, he only ratcheted the rhetoric to new heights, continuing to badmouth Brazil, and as many other people and nations as possible, on every interview show he could book, eventually earning himself an interim title shot against another Brazilian, Rafael dos Anjos. 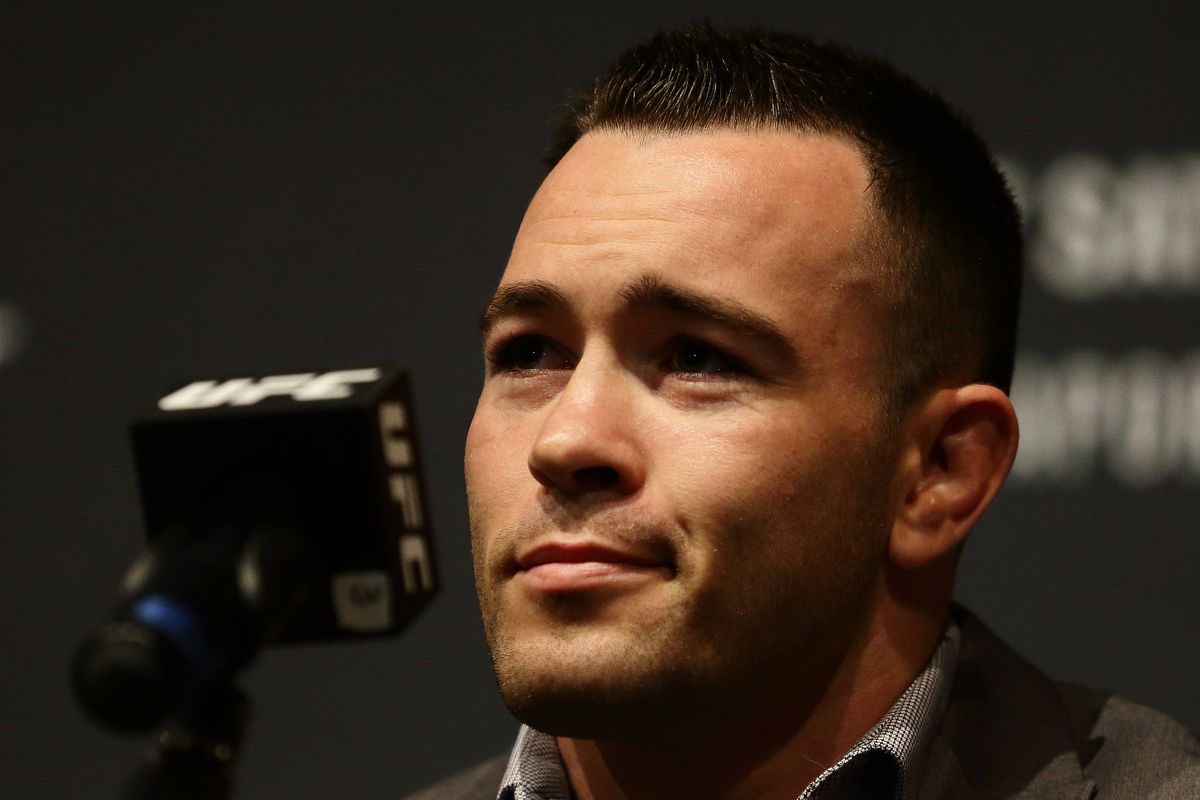 Then, in interviews last week, as he was preparing for his title shot and lest anyone actually start to like him and think of him as cool, Covington pulled out the ultimate heel move: he went heel on the “cool heel.” Jon Jones is considered by many to be the greatest fighter of all time. However, he has also tested positive for PEDs twice and street drugs multiple times, not to mention a plethora of other heelish things he himself has engaged in. Jones and Covington were also roommates at Iowa Central Community College when Colby was a freshman, and Covington used that connection to accuse Jones of having been taking steroids and loads of street drugs way back then and, just for a little added kick, Covington also accused Jones of bullying him in his steroid-fueled rages. Few professional fighters would ever say they were bullied by anyone, but when your goal is to be the ultimate heel, the “supervillain of the UFC,” you have to go all in.

This past Saturday, Covington defeated dos Anjos to become the UFC Interim Welterweight Champion. In the lead-up to the fight, Covington took advantage of the Philadelphia Eagles’ cancelled White House visit to announce that when he won the title he would “do what any real American should do and go to the White House and present this belt to President Trump.”

Covington is a fine fighter, but his prowess was not earning him the fame and opportunity he sought, so he decided to take another route. In mixed martial arts, many fans are decidedly annoyed that trash talking has gotten Covington a title shot when he had only one top-ten win on his resume. However, there is a lesson to be learned here: while MMA is a sport involving real competition and pro wrestling is more of a scripted drama, the drama factor makes fans far more invested. Covington did not evolve into a better fighter last year, he simply figured out how to engage the fans, and he learned that negatively engaged was as good as, if not better than, positively engaged. 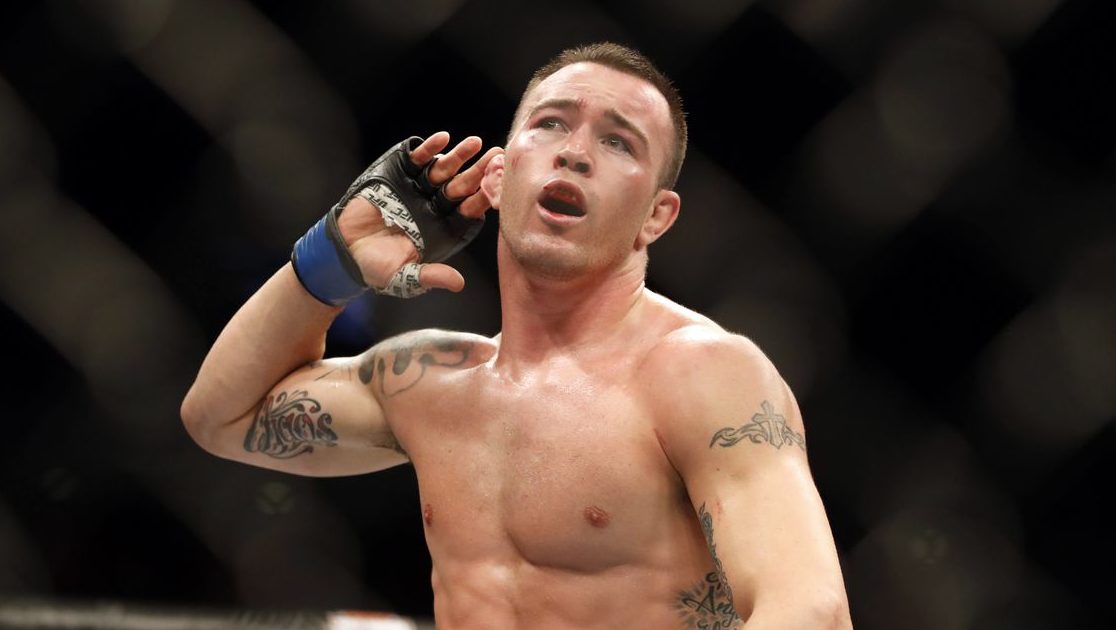 The Colby Covington character relies on some classic pro wrestling heel techniques, some with a twist. He insults an entire country and the people of the city he is performing in; he makes outlandish, over-the-top statements about himself and his opponents that have little basis in reality; and he uses jingoism and extreme patriotism to make himself annoying and hated. The twist is that being a patriotic American has always been the sign of a babyface; in the age of Trump and rampant xenophobia, and playing to a worldwide audience rather than just to a domestic one, Covington has turned American jingoism into the heel move.

Don’t get me wrong, Covington has made some missteps in his rise from obscurity. After his win Saturday night, he picked a verbal fight with Michael Bisping, one of the UFC’s better trash talkers, and was exposed as little more than a set of canned lines with no ability to think and respond on his feet. However, the relentless nature of his heel persona will keep him hated and in the forefront of the fans’ minds. Many fans dislike Colby and what he represents, but fighters would do well to learn the lesson that Covington has learned from pro wrestling: while there will always be fans that just enjoy watching fights, many more are attracted by drama. Whether you want to be a hero or a villain, fighters need to begin to develop personas that set them apart in fans’ minds and that create drama and friction leading into fights. That is how you sell fights, and selling fights is how you make money and get championship shots. Like it or not, everyone better learn it, because it is how the world works