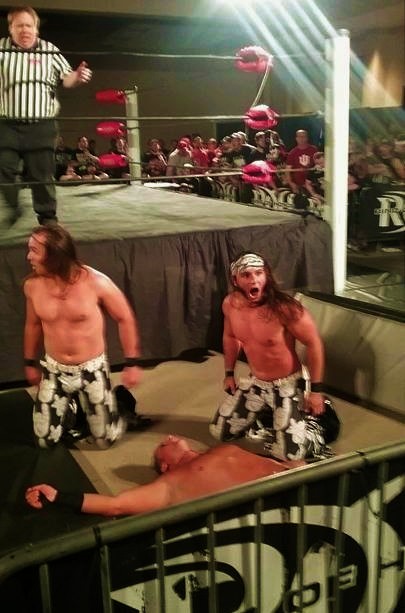 The look on Matt Jackson’s face lasted only for a moment, a raindrop in the ocean to come. It wasn’t meant to be remembered, or perhaps even noticed. I’m not even sure he was aware it was happening as he stood at the top of the Sears Centre Arena’s entrance ramp just after five o’clock CST, live on WGN America.

Before him were more than 10,000 people chanting “All In,” the name of the largest independent professional wrestling show in history, which Jackson founded, promoted, and funded alongside his younger brother Nick and their friend Cody Rhodes. They stood to his right, beaming and acknowledging the crowd the way exuberant promoters do. But Matt, the charismatic core of the bunch, was frozen with his hands on his head, elbows flared out like he was trying to catch his breath after a long run.

Seven years earlier, Matt was broke with a baby on the way. He wasn’t sure he could make rent on the apartment he shared with his wife, Dana. He had his credit card declined in an airport Popeye’s when he tried to buy a $1.99 biscuit sandwich. He told Nick that he might quit. He loved professional wrestling and the work they did together in the tag team called the Young Bucks, but … Read the Full Story HERE

When Cody Rhodes ventured out on his own in 2016, he set in motion a chain of events that will ripple through the wrestling industry for years to come