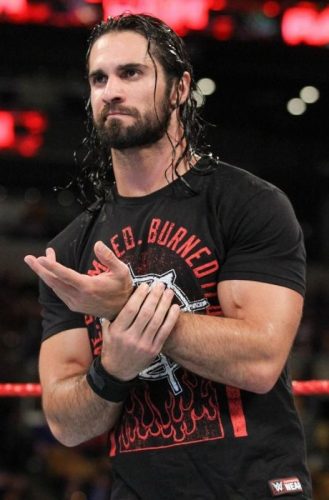 In case you’ve had WWE programming on mute for the past several weeks, I’ll tell you that WrestleMania 35 is fast upon us, which means it is our eminent duty to periodically roll out excruciatingly detailed previews of each match in the month-plus leading up to April 7. (Unless you’d prefer we dedicated thousands of words to whether Kofi Kingston will conquer Daniel Bryan at Fastlane.)

It is, to be pointed, The Ringer’s WrestleMania 35 Match Book.

As of this writing, the card for professional wrestling’s biggest night (no offense to ROH and NJPW) has but two matches on the books, both of them top billings: Raw women’s champion Ronda Rousey versus Charlotte Flair, and Universal Champion Brock Lesnar defending his title against Raw poster boy Seth Rollins.

We’re not even going to touch the former contest until it’s clear that Rousey v. Flair will proceed as planned, given the likelihood that story-line-suspended and story-line-hobbled Becky Lynch will fight her way into the bout. So let’s commence this limited feature series by taking stock of Lesnar’s and Rollins’s intertwining paths to deduce why we care and who will emerge the company’s alpha male … Read The Full Story HERE