On December 27th, 1987, Leon White, who had wrestled as “Baby Bull” Leon White in the AWA, made his debut for New Japan Pro Wrestling as Big Van Vader. 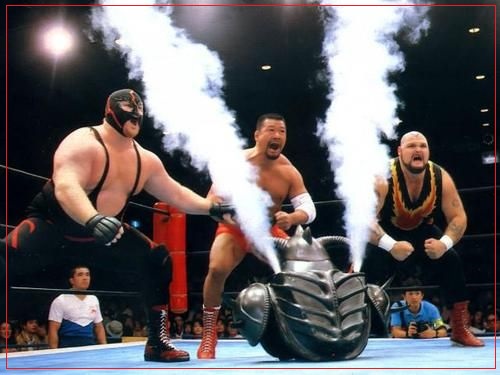 Vader would squash Antonio Inoki in under five minutes, the first time the Japanese legend had been pinned in singles action in many years. This led the pro-Inoki audience to riot, resulting in NJPW being banned from the Sumo Hall, which was its home arena; the ban was rescinded in 1989, when
NJPW

did their first show back in Sumo Hall on February 22

The Vader gimmick became almost feared by the fans, due to White’s tremendous size, explosive power and his unique helmet, that provided it’s own pre-match “pyrotechnics”.

White had originally signed a deal to compete for All Japan Pro Wrestling, but owner Giant Baba traded his contract over to
New Japan Pro-Wrestling

officials would give White the ring name Big Van Vader and his famous (or infamous) black wrestling mask. The character was based on a name from Japanese folklore, and he was introduced as the crown jewel of the Takeshi Puroresu Gundan stable that was managed by Takeshi Kitano.

SIDE NOTE: Leon White wasn’t the first choice of New Japan Pro Wrestling officials for the Vader gimmick. Both Sid Vicious and The Ultimate Warrior were approached with the idea before White eventually assumed the role and made it famous.