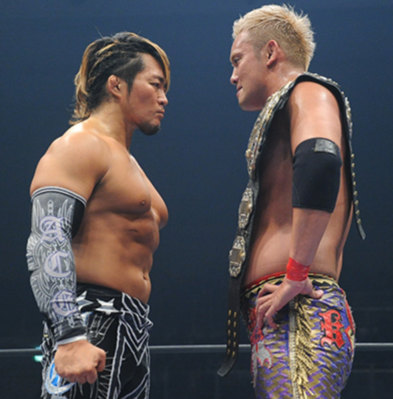 In January 2010, Hiroshi Tanahashi was the Ace. In Japanese wrestling, that means he was the promotion’s top star, and more than a decade of in-ring excellence had earned him the designation. When Tanahashi stepped into the ring for a tune-up match against Kazuchika Okada on January 31, then 22-year-old Okada—a blue-chipper but a relative nobody—hardly resembled the eventual five-time IWGP heavyweight champion fans have come to adore.

Tanahashi had already settled on his character’s (such as it was) finer points—frosted tips, snap-away cape, etc.—and developed a veteran’s muscle mass and moxy, but Okada was still a lanky Young Lion—the NJPW designation for a rookie—decked out in solid black trunks and flashing a slender, almost pedestrian physique.

Roughly 15 minutes into the match, Tanahashi scored a pinfall with his High Fly Flow frog splash. Okada took his bows and shook his conqueror’s hand, and both were then promptly battered by Tanahashi’s nemesis, Toru Yano (though he’s now known better as a DVD-hawking goof, Yano was once a serious threat). The action itself was preamble to the after-bell breakdown. In other words, it was what came after the match that mattered. Neither competitor could have predicted what was next—that together, they’d help elevate New Japan to a level of acclaim it hadn’t enjoyed since the early 2000s. Nor could they have foreseen that their opening-round dance at this year’s G1 Climax tournament—an event taking place on American soil for the first time at Dallas’s American Airlines Center on July 6… Read More HERE