One of the cottage industries that the internet has spawned from the world of professional wrestling has been the podcast.

While the concept is not new, these audio clips have found a rapidly growing audience in the last five years. So much so, that many former WWE personalities such as Jim Ross, Steve Austin and Chris Jericho have gotten in on the act- garnering huge success and even bigger download numbers by giving their honest, online takes about the sport.

The MLW Network has been one of the forerunners of wrestling podcasting, with an on-air lineup that includes such legendary figures as Eric Bischoff, Tony Schiavone and Bruce Prichard. They have also featured guests who have massive reputations and a long list of television appearances.

But, one of the names on their roster may have caught a few fans by surprise. 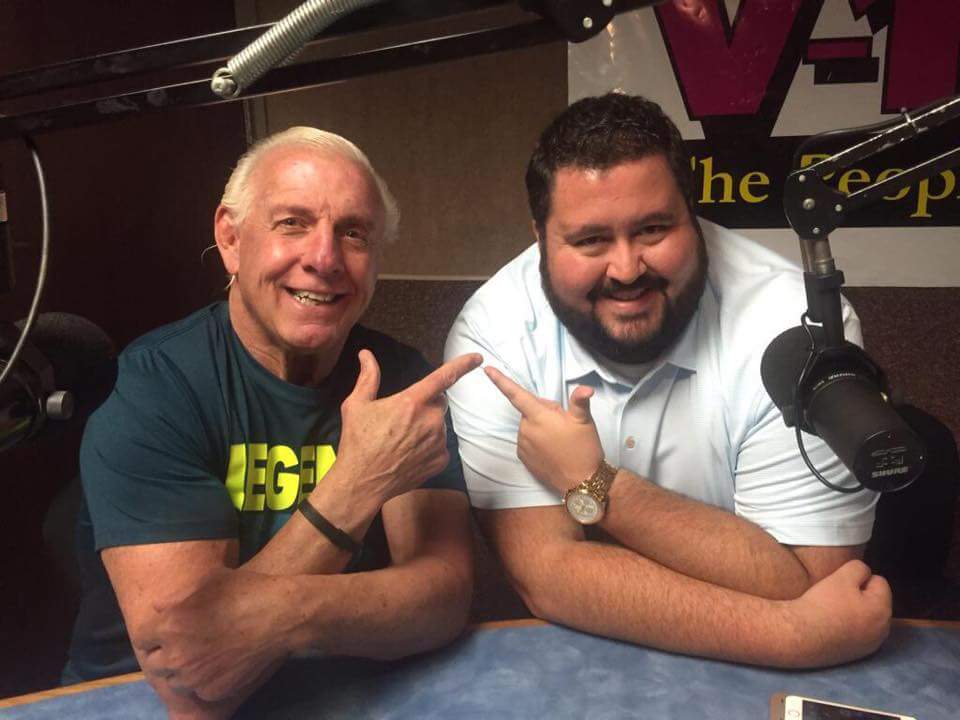 Around 2014, Conrad Thompson began taking a rather unconventional route to the world of “talkin’ a little ‘rasslin”, on his way to joining his co-hosts at the popular network.

He wasn’t a former wrestler or announcer, he was merely a fan. Still, Thompson had grown up in the south, and was a dyed in-the-wool follower of the grandest days of the sport.

The Alabama native worked in the mortgage industry when he began collecting memorabilia of Ric Flair. Through some friends he made in the industry during this time, he had the chance to finally meet up with the man, himself.

“Ric and I just hit it off,” Thompson said, as he was preparing for his weekly programs,  Something to Wrestle with Bruce Prichard and What Happened When?  with longtime WCW announcer, Tony Schiavone.

“He had just lost a son (Reid Flair passed away in 2013), and he moved from North Carolina down to Atlanta. We started hanging out, we became fast friends and eventually he had an offer to do a podcast.”

Thompson stated that everything that he’s doing today started with his early encounters and friendship with The Nature Boy.

“Ric knew that I did a lot of live radio in the mornings to promote my mortgage company, and he thought I could sit in with him and just basically ask fan questions on his first podcast.”

“We did. It went well, and we just kept doing it.”

Thompson says that his past work in radio helped him make an easy transition from fan to commentator.

“I’ve always enjoyed the live radio aspect,” he said. “I had done radio in promoting my company, and had a few opportunities to fill in for the hosts from time to time. Carrying my own show was fun.”

After doing two different programs from May 2015 until December 2016, Flair decided to move on from broadcasting. Thompson, however, had been bitten by the bug.

“It really wasn’t for Ric,” Thompson said. “He had so many other options, and it wasn’t something he could really keep making time for with his schedule and personal appearances.”

Thompson decided to continue on after his co-host’s departure, but says he and Flair are still good friends today.

“Ric’s done his duty. He has no aspirations to be a professional broadcaster, so he decided to move on and focus on other things.”

Now, as a co-host with both Prichard and Schiavone, Thompson gets to weigh in on two of the most popular wrestling podcasts currently on the web.

With Schiavone, Thompson looks back on fond memories of Jim Crockett Promotions, as well as some of the outrageous, controversial times of WCW.

“Tony was kind of the voice of wrestling below the Mason-Dixon line from 1983-2001,” Thompson remarked. “Every Monday morning, we cover one, singular topic in long form, looking back at things in history.”

On Fridays, he gets to share stories with ‘Brother Love’ Bruce Prichard, who Thompson says is very entertaining.

“People think about Bruce’s time in WWF as Brother Love or his time now in Global, but he’s got even more knowledge of the business, and he’s got great stories. He does voices and we have a good time just going back and forth.”

Thompson said his approach is usually one that is upbeat, focusing more on entertaining his audience rather than acting as a critic of the industry.

“The current landscape is so saturated, and there’s so much armchair quarterbacking, that it’s just not fun.”

“I can always find something that I like. I may find other parts that I think are just throw-away, or filler, but I can take that, because I know the better stuff is coming.”

“It’s been successful so far, I think because it’s something I really want to do,” Thompson said. “I think that’s they key to podcasting, or anything else in life. If it’s something you want to do, you will make it work out.”

Not many people get the chance to go from being a part of the audience to having an audience. But, Conrad Thompson insists that no matter how many shows he does, he will always remain just a fan.