I just thought “Volume” sounded kinda cool, better than “part”.  So yeah.  If you haven’t followed my weekly column, why the hell not?  We’ve been talking about how to make the shit product WWE puts on better!  We started with the roster shakeup focusing on the men.  Week 2 was the Women’s division.  Week 3 was the pay per views, and now we’re on week 4, the titles.  Next week will be the finale where we look at the weekly shitshow TV shows.  Except NXT.  NXT is awesome.  It needs no changes.

So, right now we have the following RAW/Smackdown/NXT belts.  In week 1 we pulled a Ronald Reagan and tore down that wall.  The one between brands that is.  So right now, we have a bunch of belts for no reason.

That’s a shit ton of titles that we don’t need.  We’re going to leave NXT UK alone, and focus on the main belts.  This is what I propose for championships in our restructure:

With this restructure, we drop a lot of titles that we don’t need anymore.  We merge quite a few, and you notice we’ve left the NXT belts alone, but we’re going to make some changes to them.

First off, we reinstate the 30 day rules.  ALL belts MUST be defended every 30 days or they are vacated.  No more of this part time bullshit.  If you’re injured, and you can’t defend for 30 days, you vacate.  This needs to be done because there are a lot of bullshit “Longest reigns” going on right now.  Those are now gone.  A title reign is now decided by times defended.  We no longer count days held, we count the times it’s defended.  Along with this we put in a ranking system like AEW has.  You start everyone at 0, full title belt reset.  Strip everyone.  EVERYONE.  All titles are now held by the longest reigning champion ever, the ever loved Vacant.  Vacant has held every title in the business at this point.  Who better to…ok I’ll stop.  Onto the rest.

First, the NXT Tag Titles are now an option to a main roster stepping stone.  You can turn them in for a shot at the WWE Tag Titles.  If you win, you’re on the main roster.  But you must cement 5 title defenses, or you go back down to NXT.  If this restructure plan happened, then you would WANT to be on the main roster!  We would do the same for the North American, it can be a stepping stone for the Intercontinental, and the NXT Title for the WWE Championship.

The WWE Intercontinental championship once held major prestige.  Right now, it’s a joke.  Though Sami Zayn FINALLY won a championship, and I’m a fan of the new design, it needs to be brought back to the level of relevance that it was when The Miz had it, and back in the way of Hogan, Warrior, Perfect, etc.  To do that, it would be similar to TNA’s X Division belt, something I was a huge fan of.  This belt would be your shot at ANY title in the WWE or NXT.  Even the tag belts.  But requirements would need to be met.  To do this, you must have held the belt for 90 days, which bare minimum would give you 3 title defenses.  But that’s not all.  You would have to not only hold the belt for 90 days, but you would have to have 10 title defenses.  For a tag team, your partner would have to have been either a former tag champion, or held a singles title within the last 30 days. 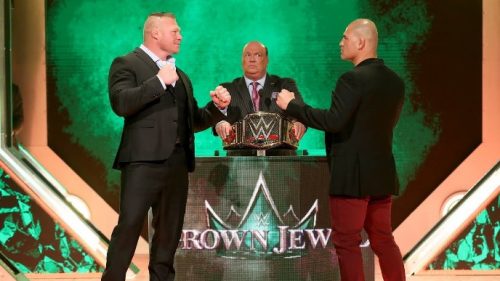 Finally, the WWE Championship.  It must be defended every 30 days or Vacant will get the belt.  If you vacate it due to the 30 day clause, you can NOT hold it for 90 days.  You will be knocked down to the very bottom of the rankings after this 90 day period, no matter what.  You must defend it at EVERY pay per view as well, barring injury or illness.  That would be the only excuse, and as long as you defend within that 30 day policy, and have a legitimate reason not to defend that night, you’ll be ok.

Now, the ranking system.  It would be a points system, and you get various points depending on what happens.

Win on a “Trade in” defense: 5 points

Lose a “Trade in” defense: 1 point

Win at a PPV except Clash of the Champions or Wrestlemania: 20 points

Lose at a PPV except Clash of the Champions or Wrestlemania: 5 points

Win at Clash or Mania: 50 points

Lose at Clash or Mania: 10 points

Each person eliminated at the Rumble or during a Dragon’s Dance Match or any elimination style match: 1 point PER elimination. So if you somehow eliminate everyone in the Rumble starting at #1, you get 79 points!

Trade in a title for a shot at another title: All your points will be reset to 0.

Anyways.  Next week, April 7th, will be the final one, looking at the TV shows, commentary teams, getting rid of a few morons we all hate on comms, and wrapping everything up.  As always @LaurenCR3 on twitter, unless you have complaints, then just hit up @RyanKBoman, TGP’s complaint department