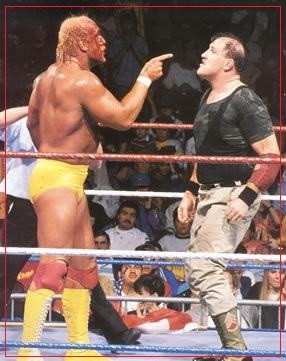 In what had been one of the most controversial angles of all time, Slaughter had renounced his U.S. patriotism, to become an Iraqi sympathizer— at the height of military conflict between the two countries.

Legend has is that the original venue, the Los Angeles Memorial Sports Coliseum, was scrapped due to death threats made against Slaughter. The company felt that the LA Sports Arena would be a better site in terms of security.

However, conflicting reports also state that WrestleMania VII was moved, because initial ticket sales were slow, and the WWF foresaw having a hard time filling the enormous, 100,000-seat Coliseum.