A film set for release next year will reportedly feature several stars of the professional wrestling world, and was even partially written by one.

“Waking Up His Wife”, originally a book by Kristal McKerrington and co-authored by pro wrestler Joe E. Legend, is the basis for the feature length motion picture of the same name. The film adaptation is scheduled to hit theaters in late 2018.

The movie is currently in pre-production, but has already assembled a unique lineup of talent.

Tara Reid, of “American Pie” fame and star of “Sharknado”, will be doing a cameo as the mother of the heroine, Anna.

Among the wrestlers listed that are involved in the project are Shane Helms, Tommy Dreamer, Al Snow, Raven and Mick & Noelle Foley.

According to it’s official page at IMDB.com, “Waking Up His Wife” is about a young woman called Anna, who wakes up to find out that she has married her best friend. Not only is he her best friend, but also her brother’s. Unfortunately, she can’t remember anything. Adam (her now husband) must take her on a journey to remember what she has forgotten, but he is about to learn a lot about himself, too.

The film is being directed by Christopher Nation, with production due to start filming on April 2nd, 2018, in Las Vegas- which is also the story’s setting. It will be the first book to film for McKerrington, who has penned eleven titles, including several with Legend.

“It’s a challenge to try to write wrestling and romance,” McKerrington said of the story. “I never expected for a wrestling romance to be this hot. There has been a lot of talk among the wrestlers about it on social media and a couple of the podcasts, and there’s definitely a buzz around it.”

The Scottish-born McKerrington began writing after a career in dance. She has written both romance and fantasy, but also has an extensive background in the wrestling industry.

In “Waking Up His Wife”, the author weaves tragedy and romance with love and family, all wrapped up in the squared circle.

“There is an incredible similarity between the world of dance and wrestling,” McKerrington said. “The athleticism and the drive to push yourself to get better. The struggling and putting in a lot of time and hard work for very little pay. The injuries, and of course, the performance aspect, as well.”

McKerrington believes the film will tell the story of professional wrestling in a way that it has never been portrayed before.

“I’ve seen the beauty of this business, and how as an art form, it tells a story in a way that grabs you and just holds on. I think that the film will have that same kind of passion.”

“I think this film has a chance to be a huge cult classic.” 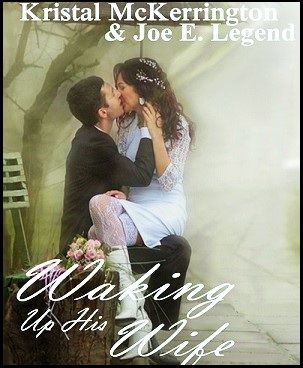