Whether it is 2.5 lbs of mirror plate or 10 lbs of gold, every wrestler who has ever laced up a pair of boots and set foot in a ring dreams of hoisting a title over their head while the crowd goes absolutely wild in celebration.

I’ll be honest, I had the same dream in the 80’s but my path took me away from joining the sport and back to it years later as a promoter. But I still like to hold the belts and take pics with them. I can’t help it, it’s a universal reaction when you see a wrestling belt.  You just have to hold it and imagine the roar of the crowd.

Not only the belts themselves hold a certain mystique but over the years they have become sought after collector’s items.  Wrestling belts themselves are legendary with the stories of lost, stolen and damaged belts over the years. One of the most famous stories, of course, is Stan Hansen (who I have talked about in previous columns) vacating the AWA world title and destroying the “Inmate” belt. 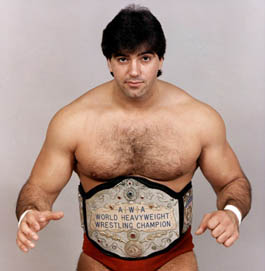 AWA owner Verne Gagne wanted Hansen to lose the title to Nick Bockwinkel on June 29th, 1986, in Denver, Colorado. But at that point, Hansen and Giant Baba (owner of All Japan Pro) had a commitment at that time in Japan with the AWA Title. Hansen refused to drop the title because of his loyalty to his commitment to Baba and left the building with the belt in hand, so Gagne stripped the title from him and awarded it to Bockwinkel. When Hansen found out, he put the belt on the ground and drove his truck back and forth over it several times, and then sent the title belt back to Verne–with the tire tracks on it.

And then there are the titles stolen from wrestlers’ vehicles. Bruno Sammartino had a WWWF title stolen from his vehicle while he was eating dinner one night following a successful title defense at Madison Square Garden. Pedro Morales claims he lost a title belt the same way–although not, it should be noted, at the same restaurant. Later on, Pedro’s version of the belt showed up in a Pennsylvania pawn shop, where it was purchased by a private collector. And Michael Hayes had one of the NWA tag titles stolen from him, which is why the Freebirds appeared for awhile with only one title belt between them during their 1989 run. Also, Jerry Lawler’s Southern junior heavyweight title was stolen following an afternoon show when Lawler walked away from his bag. He came back a few minutes later to find his bag still where he left it, but the belt was gone.

Now if that doesn’t make you respect the power of a wrestling belt then think back on the territory days.  Entire shows would sell out based on the match where a belt had been “destroyed” so it was definitely worth a few hundred dollars investment in a new belt in order to pack the building.  Interesting… isn’t it, how belts hold so much power? 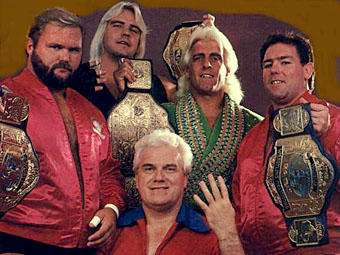 While a title belt has always been a prop, not until fairly recently have audiences have actually come to grasp that fact. It is a photo op, a weapon or way to taunt your opponent simply by standing off the ring and displaying it.  In our most recent show, our champion sought to use the belt as a weapon while taunting her opponent. In a power struggle with the referee, the belt was knocked to the ground and the challenger drove our champion onto it headfirst, then gained the pin.  New champion via use of the belt as a prop and weapon. Smart.

Now whether a promotion uses a new belt, replica belt, or a borrow belt for their champions, it still has the same sense of awe for wrestlers and fans alike.  It’s a part of history and will go down in the record books that at one point so-and-so was a pro wrestling champion. Sigh..it doesn’t get any better than that.  So whether you support a company or not, it still carries the same respect from the owner to a champion that they want that person to represent their company.

So as you all dream of hoisting a belt, ignite your fire, and follow your dreams.