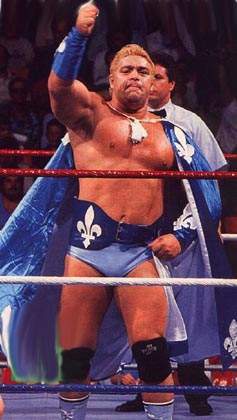 Adolfo Bresciano, known to wrestling fans as Dino Bravo, is found after being brutally murdered in his home in Quebec.

Bravo had been reportedly sitting in a chair and calmly watching a hockey game when he was shot 17 times – with seven wounds to the head, and 10 in the torso – by unknown perpetrator(s).

It’s widely believed that Bravo’s alleged ties to organized crime led to his untimely demise at the age of 44. Several veteran wrestlers have stated that he was involved in a cigarette smuggling ring, and that a disagreement over money may have led to a possible ‘mob hit’.

Bravo had two, very different runs in the WWF. One as a smaller, technical wrestler in the late 70’s and early 80’s, where he was cheered by the fans. He and partner Dominic DeNucci would captured the World Tag Team titles during this span. He would depart the Federation for a time, and work regional territories in the NWA, as well as his native Canada.

Upon returning to the company in 1986, however, he had noticeably bulked up and worked more of a powerful style. He also aligned with rule-breaking managers like Frenchy Martin and Jimmy Hart during this tenure. He would receive title shots against Hulk Hogan during his second tenure, but never managed to capture any more WWF gold. Bravo left the company in 1992, about a year before his death.