This article is dedicated to the memory of my late, beloved friend Nicole Bass who passed away 3 years ago today…

A lot on my mind this week on pro wrestling past and present, so let’s jump into this stream of consciousness thing I do for the distinguished Gorilla Position. Thanks to Ryan K. Boman, King of Men, for this forum.

— Fresh on my mind is last night’s topnotch NXT Takeover: Portland. Big question for the NXT fans who follow them more closely than I do. If they can put on a show this excellent from top to bottom why can’t they do that every week with a 2-hour prime time slot and why are NXT house shows which I’ve been to nothing special? And why does HHH get the genius “tag” when every single guy involved in the main event was weaned in ROH?

— While you’re pondering all that, here’s the NXT Takeover Portland Wrap-Up in no particular order:

NXT Champion Adam Cole vs. Tommaso Ciampa Great match despite a screwjob finish. Don’t miss it. 4 1/2*
NXT Women’s Champion Rhea Ripley vs. Bianca Belair One of the better women’s matches I’ve seen in WWE. Real good. 3 1/2*
NXT Tag Team Champions The Undisputed ERA vs. Matt Riddle & Pete Dunne Another topnotch match with four world class performers. 3 3/4*
NXT North American Champion Keith Lee vs. Dominik Dijakovic With exception of predictable winner, this was as good as it gets with two huge guys. 3 3/4*
Tegan Nox vs. Dakota Kai (Street Fight) Typical ECW style brawl with the usual furniture as weapons. Despite intensity I didn’t care whatsoever and screwjob finish didn’t help. 3*
Johnny Gargano vs. Finn Bálor Johnny Gargano vs. Finn Bálor. Excellent match with every hold in the book. Last few minutes REALLY built. 4*
There it is in a nutshell. No need to read 1000’s of words of over-analysis. Check it out. Show’s well worth seeing.

— On the subject of match ratings, it’s interesting how subjective rating a wrestling match is. You can have five “knowledgeable” folk watch the same match and give it five different ratings. And we all have our biases. Personally I don’t rate a match as highly where I go, “I 100% KNOW this guy is going to win” no matter how great the match is. I also feel screw job finishes take away from a rating. And I rarely give 5* because to me that’s perfection and that’s hard to attain. But ultimately unless you’re clueless and watch a Flair-Steamboat or Okada-Omega level match and go, “That’s crap” we’re all entitled to our opinions.

— If you notice, when I do my reviews they’re spoiler free. One of my pet peeves in the wrestling community are the endless spoilers that are out there while shows are going on. NXT and AEW on the same time? Hey, let’s put all the results and title changes out as they happen so it kills the joy of watching it later. Actually, when I hear the results I don’t even bother seeing it. Thanks, fellas.

— Speaking of that, why all the picking sides with the AEW vs. NXT thing? Why not enjoy both or at bare minimum cherry pick the best matches to watch on both? It’s not a gang war where you need to be in the corner of one and declare war on the other. The same guys WWE fans adored when they were there- Jericho, Dustin, Cody, Pac, etc. now all fall under the umbrella of “vanilla midgets” or “spot monkeys?” I call bull.

— And, while I’m venting, click-bait hacks can take just a moment out of their busy day doing the blow by blow over-analysis of pay per views and meaningless Raw and Smackdown episodes and actually- gasp!- acknowledge someone in the wrestling community who has passed away. I know the Otis-Mandy Rose romance is weighing heavily on you, but there are folk who devoted their lives to this business and worthy of being mentioned.

— Speaking of which, I was terribly saddened to wake up to the tragic news that Robert Luis Miqueli, Admin of the popular Kult of Kayfabe Facebook, group passed away the other day. He was always very supportive of my work and of so many in the wrestling community. RIP.

— Also, the highly regarded and beloved indy wrestler Nick Steel died recently as well. Noted promoter Sheldon Goldberg had this to say about him: “Very sad to hear of the passing of Nick Steel. A tough guy, very good wrestler and most importantly a good human being taken from us way too soon. My deepest sympathies to his family.”

See how easy that is, “wrestling journalists?” It’s caring about a wrestling community and not just catering to the “WWE is my life” obsessives. Takes a mere moment. C’mon. “Do the right thing.”

— Rumored going into the WWE Hall of Fame this year, the Bella Twins. You know, because all-time greats Ivan Koloff, Ray Stevens, Dynamite Kid are busy this time of year. All sarcasm intended. Ivan Koloff headlined MSG 13 times won the belt from Bruno back when it actually meant something and is easily a Top 10 or Top 20 all-time heel and perennial main-eventer around the world. Ray Stevens is regarded by his peers as one of- if not THE- greatest worker to ever step foot in the ring. And Dynamite Kid was an innovator who revolutionized the wrestling business. None of them looked as good in a pair of shorts as the Bellas though. What a fiasco.

— Yours truly will accompany Team Splendid to the ring as “Mr. Evans The Chauffeur” as we face one of the greatest tag teams of all time, The Rock & Roll Express, for Titan Championship Wrestling April 18th at the Berkley Little League Volunteer Community Center in Bayville, NJ. Team Splendid is former ECW Tag Team Champion Chris Michaels and Simply Splendid Bobby C. Team Splendid does a (very) old school Gorgeous George type gimmick. Some of the best nights of my life were seeing The Rock & Roll Express vs. The Midnight Express live so it’ll be a “mark out moment” for yours truly to be in ring and interacting with them. And always remember “YOU will never ride in Team Splendid’s limo…”

— Come meet JJ Dillon and Tommy Rich at Wrestle Con Wrestlemania weekend. Those who want to pay in advance for autographs and photos with the legends with beat the line privileges visit www.rivalrychampionshipwrestling.com for the details.

That should about do it this go round. Catch you soon.

Evan Ginzburg is a contributor for The Gorilla Position. He was an Associate Producer on the movie The Wrestler and 350 Days starring Bret Hart and Superstar Billy Graham. He is a 30-year film, radio and TV veteran. Check out his Evan Ginzburg’s Old School Wrestling Memories page on Facebook. He can be reached on Twitter @evan_ginzburg or by e-mail at evan_ginzburg@yahoo.com. 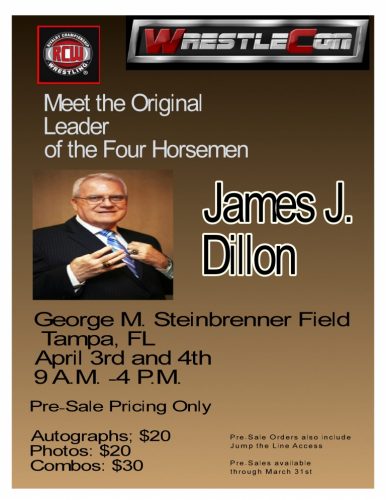