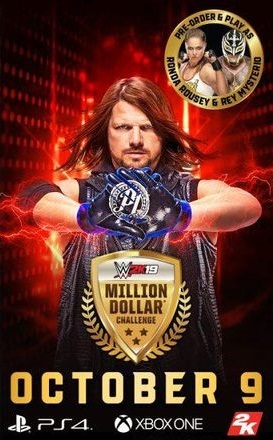 The official release date for WWE 2K19 is October 9, but fans who pre-order the Deluxe Edition you will get early access four days early on October 5. In addition to getting the game early, pre-order customers will also receive Ronda Rousey and Rey Mysterio Jr. as playable characters.

There are three different versions of the game. The Standard Edition includes only the base game, and it costs $59.99. There’s also the Digital Deluxe edition which runs $89.99. The grandest version is the Woo! Edition, which features special Ric Flair memorabilia and retails for $129.99.

On Monday, 2K posted the official release trailer which features some trippy colorization and undertones fit for the upcoming Halloween holiday… Read the Full Review & See the Game Trailer HERE