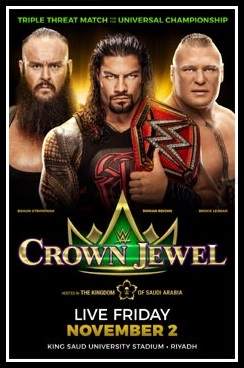 Six days ago, WWE was in an uncomfortable position regarding its upcoming Crown Jewel event in Riyadh, Saudi Arabia, the second card in a 10-year contract with the kingdom believed to be worth $20–$50 million per show.

Saudi Arabia’s brutal war of attrition in Yemen and, more recently, Turkey’s insistence that the Saudis killed and dismembered the dissident journalist and American resident Jamal Khashoggi in their Istanbul consulate, have made that deal look either ethically dubious or completely unconscionable, depending on how charitable you’re feeling. It was never anything but that, but recent events have only made things look worse for WWE.

The Saudis are pushing an “interrogation gone wrong” cover story on Khashoggi’s death, but the Turkish government claims to have a recording proving otherwise. There’s still a great deal that’s unknown about the case, but what’s known is bad enough that a growing number of companies are cutting ties with Saudi Arabia; lawmakers are pushing legislation for the U.S. government to do the same.

Even Endeavor, the Hollywood talent agency-cum-content factory that owns the Ultimate Fighting Championship, has backed out of a deal to sell a minority stake to the Saudi government. This came after Endeavor issued a near identical statement to the one that WWE issued about “monitoring” the situation … Read the Full Story HERE